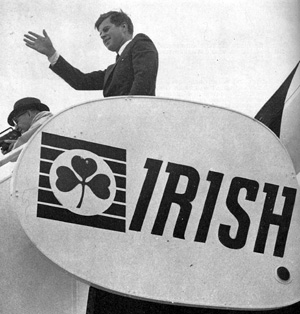 The English language is a strange tool of communication, and just as in Alice in Wonderland, words can mean whatever we want them to mean. Warm is a partner to hot, and 'welcome' is a cousin to 'reception' but a warm welcome is a different kettle of fish from a hot reception.

When George Dubya Bush arrives on our shores this week he would deserve to learn the difference but of course no one will get close enough to voice that message. Instead, he'll be cossetted from the true feelings of the vast majority of Irish people and will amble home refreshed that all is well in the Emerald Isle, with maybe a few more votes secured for his re-election campaign.

Forty-one years ago and with another US President arriving in Ireland it was all a different story. On 17 June 1963, the then Uachtarán of Sinn Féin, Tomás Mac Giolla, sent JFK a letter on behalf of the Ard Chomhairle of Sinn Féin extending a welcome 'both in your personal capacity and as President of the great American Republic'.

Outlining the history of Sinn Féin and pointing out that the party recognised neither of the partitioned assemblies in Ireland, Mac Giolla noted that the President, Government and Army of an Irish Statelet were not President, Government or Army of Ireland. 'Consequently we cannot be associated with or participate in the 26 County State welcome... we therefore take this opportunity of presenting you with a letter of welcome on behalf of all those who refuse to recognise the right of Britain to legislate for any part of Ireland'.

The letter went on to remind Kennedy that he would be visiting the home from which his ancestors were forced to emigrate because of economic oppression.

He would not be visiting the North and was told that Sinn Féin was 'candidly pointing out' that the real reason for people rejoicing at the visit was not only because of warm personal regard and close ties, but because of the 'people yearning to be free... and their hope that you will in some manner help to break the shackles that bind them to England'.

'We trust therefore that during your stay you will not do or say anything which might bolster British division or occupation of our country... and wish to convey our very best wishes for a happy journey and an enjoyable stay among us.'

One sentiment, I'm sure, that we won't hear voiced with any conviction during the next few days!