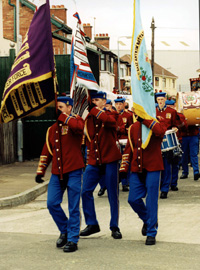 Nationalist residents of the Springfield Road breathed a huge sigh of relief after the Parades Commission banned a controversial Orange Order parade from the area this Saturday.

The annual Whiterock parade was banned by the Parades Commission from crossing the West Belfast peaceline onto the nationalist Springfield Road, to the relief of nationalists who have, over the years, been put under siege by hundreds of crown forces personnel.

However, in a typical reaction to the banning order, Democratic Unionist Party leader Ian Paisley and the Orange Order have warned that the decision could "threaten law and order and raise community tensions in Belfast".

The decision was branded as an act of sheer madness by the Orange Order and led Ian Paisley to demand a meeting with Tony Blair to discuss the issue.

The Springfield Residents Group called for "level heads" during the coming days and again said they would be prepared to meet the Orange Order to find a compromise.

Seán Murray, a spokesperson for the Springfield Residents Action Group, said "re-routing Saturday's parade was the only right decision that the Parades Commission could have made.

"Year after year we have presented the commission with overwhelming evidence that this parade was sectarian and triumphalist in nature."

Murray added that the Springfield residents have repeatedly offered to meet with the Orange Order to discuss the parade but have been totally ignored.

"We have repeatedly suggested a compromise based on the five-point plan we put to the Orange Order and community groups on the unionist side.

"The plan would have facilitated the Orange Order but every one of those compromises was turned down by parade organisers. Those offers are still on the table for the Orange Order and all they have to do is come and talk to us," said Murray.

One of the reasons cited by the Parades Commission in their determination was that they had little faith that the Orange Order would control those taking part.

The commission also highlighted the fact that while community leaders on both sides were engaged in talks to defuse tensions, the Orange Order had refused to engage in talks with anyone, including the commission itself.

"In the present case, the Commission is not aware of any meaningful engagement having taken place, this despite the hard work across the community to initiate such contacts."

The commission found that the Orange Order had broken assurances given prior to last year's parade that sensitivity would be shown over flags and bannerettes to be displayed while marching through the nationalist area.

And referring to a banner in memory of UVF man Brian Robinson, who was shot dead by the British Army minutes after killing Catholic Patrick McKenna, the Parades Commission said it "does not consider the carrying of a bannerette with a painted image of an Orangeman's face with the words 'Late BRO B Robinson UVF killed 2 September 1989' as a sensitive gesture to the residents of the Springfield Road".

Residents have consistently protested about the Orange March, which is the only Loyal Order march in West Belfast that parades along a nationalist area.

Provocative and triumphalist displays of sectarianism have accompanied the march throughout the years and in 2000 a masked UDA colour party was photographed as Orange stewards ushered it into the main body of the parade as members of the RUC looked on.

In 2002, serious trouble erupted along the Springfield Road after the parade. PSNI squads who refused to withdraw from the area were harassing residents, some of whom were prevented from returning to their homes, when the trouble started.

The PSNI fired plastic bullets, injuring a number of people.

Sinn Féin Assembly member Gerry Kelly has appealed to people on all sides to ensure that this weekends re-routed parade passes off without incident.

He warned that much of the commentary made by unionist political

representatives in the days since the decision was taken "will not benefit efforts to ensure that the march passes off peacefully, and is in contrast to earlier statements from prominent unionist politicians committing themselves to working for a peaceful summer in the city".