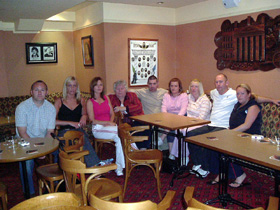 Irish people have a long history of struggles to improve jail conditions. In the context of the peace process and promise of the Good Friday Agreement, the harassment and intimidation of prisoners and their families seems out of step, almost unthinkable.

In a small room in West Belfast, the families, mothers and wives, brother and sisters of five remand prisoners currently being held in a segregated unit in Maghaberry Jail described the inhumane conditions and vindictive harassment presently being endured by both the prisoners and their visitors. It is an alarmingly familiar tale.

Four of the prisoners are on remand in connection with the Tohill incident. Regardless of the status of the incident itself, which has been dismissed as little more than a pub brawl, the actions of the PSNI Chief Constable, British Government and IMC have ensured its politicisation.

It appears the prison authorities have needed little encouragement to target a number of segregated remand prisoners for the kind of vindictive and punitive measures reminiscent of the treatment of republican prisoners in the past.

Roe House is a segregated unit within Maghaberry which accommodates 30 Catholic inmates, a number of which are remand prisoners. According to their families, the five remand prisoners are currently enduring 22- to 23-hour lock-up every day.

Until recently, the six-foot by four-foot cells were occupied by two prisoners. Each cell contains a toilet and small handbasin. Meals are taken inside the cell and dishes are washed in the hand basin. A number of prisoners are refusing to shave, cut their hair and wash using the cell facilities while they are forced to use the same sink for washing their plates, bowls and cups.

In the short time allocated outside the cell, prisoners are forced to choose between taking exercise, spending time in the yard, or showering.

"Prisoners using the gym can't take a shower afterwards. They have to wait until the following day. Time outside the cell for taking exercise or washing or collecting a meal isn't allocated separately. Sometimes prisoners taking a shower are forced to miss a meal," says one relative.

"Each prisoner is allowed ten minutes out of the cell to use the telephone," says another relative. "That ten minutes is timed from the moment the prisoner leaves the cell. If the telephone is out of order on the landing they have to run to the next, or if there is a queue to use the phone or their families don't pick up the phone immediately they lose out."

"It's ridiculous. These men are on remand, they are innocent until proven guilty, but the authorities are denying the prisoners proper access to their families by the vindictive enforcement of petty regulations."

In September 2003, the British Government accepted the Steele Review, which accepted segregation on a voluntary basis within Maghaberry Jail and set out in an explanatory publication the conditions to which segregated prisoners are subject.

As in the past, harassment of prisoners is often accompanied by the harassment of their families, most particularly over the issue of visits. Currently, to secure a visit the prisoner must inform his family, by telephone, of a number that has been allocated to him.

"This number is changed every couple of weeks and without it family members can't book a visit," explains a relative. "Once you have the number you can telephone the jail and arrange a visit but it must be arranged before 10am on the day of the visit."

But even when relatives are successful in securing a visit, it doesn't necessarily mean the visit will actually take place. The prison authorities have recently introduced sniffer dogs as part of the pre-visit search routine imposed on the families.

Following an initial search, relatives describe a long corridor marked out with black tape. At each point along the route the visitor must stand and if the dog shows any interest at all the visit is withdrawn.

"Families have been so desperate they have even asked to be searched again so that any suggestion that they are carrying drugs can be eliminated but the authorities just refuse. One day the sniffer dog stopped a six-year-old child. Another day it was a 69-year-old woman," said a relative.

Another relative described a dog described by the prison as a 'trainee' jumping about and frightening the children. "These are fair sized dogs, mostly Labradors and not everyone is comfortable about being confronted by these animals. The dog became so out of control that we were told just to go ahead," she said.

If a child needs to use a toilet during a visit an adult must accompany them and both are then subjected to an additional sniffer dog search. "If the dog reacts at all the visit is stopped and we don't even get the opportunity to say goodbye. It's very distressing for the children."

During visits the rigorous imposition of petty regulations often leads to the visit abruptly being brought to an end. Prisoners are required to remain seated. "Visits have been stopped because a father stood up to retrieve his young child. Another was stopped because a prisoner greeted relatives of another prisoner at an adjourning table," said a relative.

If a prisoner complains about a visit being aborted the riot squad are immediately summoned. "The warden presses a button and six or seven officers in masked and in full riot gear take the prisoner away. Prisoners are repeatedly sent to punishment cells on any excuse. It a terrible experience for children to witness their father being dragged away," said a relative.

The five remand prisoners have been subjected to repeated strip searching. "They are sometimes strip searched two or three times on the way to a visit and again afterwards. The searches take place within a few yards of each other. The prisoner is often strip searched by one warden in view of a second and then handed on to the second warden who conducts another strip search," said a relative. "It's just harassment."

Relatives report that in less than four months they have witnessed the health and appearance of the prisoners on remand deteriorate. "They're all very pale and losing weight, we're very concerned about their health."

Speaking in support of the families, Sinn Féin Councillor Paul Maskey said that conditions in the unit are clearly unacceptable and harassment around family contact and visits despicable.

"There are 30 prisoners in the segregated unit and currently they are being subjected to around 6,000 searches a month; this includes cell searches and strip-searches. Cells are sometimes searched repeatedly on the same day," said Maskey.

"The five remand prisoners who are currently being targeted for harassment are Liam Rainey, Gerard McCrory, Harry Fitzsimmons, Thomas Tolan and 'Packy' Leonard. The families of these prisoners are becoming increasingly concerned for their health and wellbeing and have decided to highlight the conditions under which they are presently being held. The difficulties experienced by relatives in maintaining meaningful contact must also be urgently addressed.

"The treatment of prisoners, both remand and sentenced, with respect and dignity is a basic human right and must be adhered to by those in authority," said Maskey.