Making republicanism relevant - This is our time 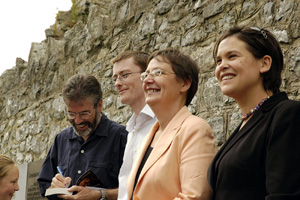 Standing on the shoulders of giants was a recurring theme at this year's Bodenstown commemoration, which took place last Sunday. For the first time in a long time, republican Joe Cahill could not attend the celebrations, due to illness, and both Deirdre Whelan, who chaired the proceedings, and main speaker Gerry Adams, marked his absence. Annie Cahill was there, however, and laid the first wreath of the ceremony.

Basking in the sunshine and the afterglow of election success, the crowd of thousands listened while tribute was paid to Theobald Wolfe Tone and to the many republicans since who have struggled to achieve Irish unity. Newly-elected MEPs Mary Lou McDonald and Bairbre de Brún also spoke briefly about Sinn Féin's latest electoral breakthrough.

In his main address, the Sinn Féin leader gave an update on the Peace Process and spoke about the party's success in the local government and EU elections.

In the battle of the bands, the much sought after Feargal Caraher Memorial Trophy went to the Glaswegian Seán McIlvenna Republican Flute Band.

What follows is the text of Sinn Féin President Gerry Adams' speech.

I'd like to start off by welcoming everybody here today for the annual Bodenstown commemoration.

This is one of the highlights of our calendar, a chance for us to gather together and look at our progress over the year, while honouring a republican hero, Theobald Wolfe Tone.

'From my earliest youth, I have regarded the connection between Ireland and Great Britain, as the curse of the Irish nation; and felt convinced, that, whilst it lasted, this country could never be free nor happy.'

We are proud to be Irish republicans in the tradition of Tone and we assert here at this graveside that neither the people of Ireland nor Britain can be truly free or happy while British jurisdiction remains in any part of Ireland.

Our primary political objectives, therefore, remain an end to partition, an end to the Union, the construction of a new national democracy, a new republic, on the island of Ireland, and reconciliation between orange and green.

Key to achieving this is the hard, tedious, difficult work of building political strength. By building that strength we will build the capacity to move both the British Government and the unionists and to influence the political agenda in this state.

Last November, Sinn Féin took another step forward in achieving our goals. This party became the largest pro-Agreement party in the North, a significant achievement for a party which, for over three decades, was demonised, marginalised and whose members and families have been the targets of assassination.

Last weekend, Sinn Féin broke the mould of Irish politics by electing Mary Lou McDonald and Bairbre de Brún to the European Parliament and by electing councillors right across the southern state.

We have come a long way from the Ard Fheis 21 years ago when I said: 'If Sinn Féin stands on the sidelines, separate from and isolated from the people, we cannot hope to attract support for what looks like a vague utopian image of some perfect Éire Nua of the future. The solution is for Sinn Féin to get among the people in the basic ways that people accept — this means new approaches and difficult and perhaps risky political positions have to be faced up to by us.'

We have developed those new approaches. We have taken difficult and risky decisions.

We have demonstrated time and time again a preparedness to go on the political offensive, to take initiatives and go toe to toe with our political opponents in the battle of ideas, as well as in the hard job of building workable political partnerships.

A year and a half ago, the British Government suspended the political institutions in the North at the behest of unionism.

Irish republicans have made serious and repeated efforts to work with the two governments and unionists to find a way to resolve this crisis in the process.

Sinn Féin is again engaged in detailed and intense discussions with the two governments. These have been ongoing for some months, including during the recent election campaign, and have now reached a new intensity of dialogue.

Our objective is clear — to restore the political institutions and end the crisis in the process.

Consequently, Sinn Féin is pressing for a comprehensive and holistic package, which deals with all of the outstanding matters in a way that is definitive and conclusive.

In our negotiations with the governments, and in our efforts to achieve a package of measures that will secure progress, we have focused on a number of key issues. These include the need for full participation in the political institutions; the issues of policing and justice, including the transfer of powers to the Assembly; the issue of armed groups and arms; and the issues of human rights, equality and sectarianism.

There are also matters that are clearly the responsibility of the two governments, as well as issues for the Review.

Sinn Féin is committed to playing a full and productive role in resolving these matters.

This means more challenges ahead for Irish republicans.

This means republicans facing up to these challenges, sure in our belief in our republican analysis and confident in our peace strategy.

The reality is that if the political will exists — and republicans have that political will — then we can all collectively make progress. Consequently, the intense efforts to agree a package must continue until there is an agreement or until we have exhausted all possibilities of agreement.

The decision by the governments to put off intensive negotiations until September means that they have bought into the time frame set down by the DUP. Once again, the governments are allowing unionism to set the pace in the process. This is unacceptable.

There is no reason why the effort to resolve this should be put off for the summer and we will put this directly to the British Prime Minister and the Taoiseach when we meet next Friday.

For our part, we will use our vote wisely. We will not rest on our laurels. Sinn Féin is a can-do party. 342,000 people across this island accept that and gave us their vote.

These votes are not second-class.

Our voters will not be treated as second-class citizens.

Each and every citizen who voted for Sinn Féin is entitled to respect and equality of treatment, exactly the same as every other citizen, and this party will be the guarantor of that. No one has the right to question the democratic credentials of Sinn Féin or our voters. We will work not only for those who voted for us, we will work also for those who did not vote for us.

We also expect the very highest standards from our representatives. We must take our example from the first MP of our generation — Bobby Sands MP and our first TD Kieran Doherty.

We cannot expect to emulate their sacrifices but their integrity, generosity, comradeship and dedication, along with that of Councillor Eddie Fullerton, Cllr John Davey, Cllr Bernard O'Hagan, Sheena Campbell, Vice President Maire Drumm and the many other members of this party and family members and friends who were killed, are the role models for us today.

Remember that our mandate and the rights of our electorate were won on the sacrifices of others and their families.

And remember also that while elections are about numbers, and seats, our interest, Sinn Féin's electoral interest, is in building the political strength necessary to bring about change.

The motto of the United Irish Movement, founded by Wolfe Tone, was one word — Equality. Inequality has thrived in this state as successive governments pursued right-wing policies with vigour.

The reality is, at a time of great wealth the establishment wasn't listening to people. It heard people. But it chose to ignore them.

The opposition parties have been no better. Labour and Fine Gael are already signalling that once again they are considering an alternative coalition government.

Labour has made this mistake before. Three times in the last 60 years Fine Gael was periodically rescued from terminal decline by being put into government by Labour.

People don't want more of the same. If Labour is interested in alternative politics it should work with others to build a real left alternative, instead of concerning itself with getting Ministerial seats. Little wonder it has been said that the Labour Party went into the GPO with James Connolly in 1916 and never came out again.

A radical agenda to end inequality and advance the Peace Process and Irish unity is urgently required. Let me also point up the need for us to support efforts to revive the Irish language.

I believe that there are people in every political party who support all or some of these objectives.

There are good people in every political party on this island and many more outside of the political parties. I believe that everyone who is committed to ending inequality needs to come together in a broad, even at this point, informal alliance for change. This must include not merely political parties but community groups, voluntary organisations, trade unions, rural organisations, campaigning groups and human rights bodies.

A Lot of Work to do

Last week's election was not just about seats for us.

Our success in the future will be judged by the amount of change we bring about. Already there are rumours and speculation that the government is going to change some of its policies. If that is the case then we have already begun to make an impact. This is our time. Sinn Féin doesn't have all the answers but we have commitment. We have idealism. And we have strategies.

We also have a lot of work to do. We have to open our party up to women comrades and to people who will bring their own life experiences and values. I particularly want to commend Ógra Sinn Féin for their dedicated work and enormous contribution.

Next year marks the 100th anniversary of Sinn Féin. We have a year of education, of re-popularising the republican struggle, a year of analysing and learning the lessons of a century in struggle.

We will be launching Coiste Chomóradh an Chéid, The Centenary Committee, to organise and plan these celebrations.

And then in the same period we will have to reflect on how best to remember and celebrate in 2006 the 25th anniversary of Hunger Strikes.

We also intend to relaunch An Phoblacht and I want to mark that up as one of the priorities for activists in the time ahead.

Let me commend all of our workers and let me thank especially all of those who vote for us. On your behalf I also thank every one of our candidates and their families.

There will be difficult times ahead. We must rise to the challenges before us.

Irish republicans have demonstrated time and time again our capacity to overcome adversity and advance our struggle for freedom and justice against enormous odds.

It is not enough to sloganise. We are not verbalised republicans or rhetorical revolutionaries. We are deadly serious about turning the vision of 1798 and 1916 into a reality.

I believe this generation of Irish republicans will do just that.

It will not be easy. But our responsibility as activists is to make republicanism relevant in our time. This is our time.

So, let us move the struggle forward. Let us keep building our strength. And let us keep our eye on the prize.

The prize of freedom.