This is why we're protesting 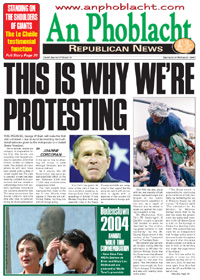 This weekend, George W Bush will visit Ireland — but he won't be receiving the traditional welcome given by the Irish people to a United States President.

It's no wonder people are unhappy. In preparation for his trip, the Gardaí are mounting their largest-ever security operation, which has already clocked up massive costs. The citizens of Clare, where he will land, have been placed under a state of virtual martial law. The right to peaceful protest has been severely curtailed by a government that has refused to acknowledge many Irish people's legitimate complaints and concerns about the visit. The same government has flouted Ireland's neutrality time after time, in particular during its direct participation in the war on Iraq by allowing US troops to pass through Shannon and to train on Irish soil.

As it stands, the US Government has spent an estimated $200 billion on the war. Between 9,000 and 11,000 Iraqi civilians have already been killed.

The Irish people have expressed their views on the war in Iraq. Mostly, they oppose it. They are not anti-United States, but they are anti-US foreign policy.

Sinn Féin has given its view of the visit. It has no more problem speaking to George Bush than it does speaking to British Prime Minister Tony Blair. Both play essential roles in the Peace Process and both are recognised in that regard. But the party has said it will not pretend to agree with or approve of the current US administration's foreign policy.

Sinn Féin has also, along with the vast majority of Irish people, expressed anger and disgust at the Dublin Government's culpability in the war, as a result of Shannon and its refusal to speak out against the ongoing occupation of Iraq.

On Wednesday, Sinn Féin TD Caoimhghín Ó Caoláin sought a special Dáil debate on what he described as "the continuing gross violation of Irish neutrality" by the 26-County Government in the context of the "unwanted visit" of President Bush.

His demand was warranted, he said, coming after the admission by Minister for Defence Michael Smith that the Government had allowed US Marines to train in the Curragh for the past five years. This information had been long sought by Sinn Féin's Aengus Ó Snodaígh and was only recently, reluctantly, given.

"The Government is responsible for continuing gross violations of Irish neutrality by facilitating the use of Shannon Airport by US troops," Ó Caoláin said. "The admission by the Minister for Defence, Michael Smith, that, for the past five years, the government has authorised members of the US Marine Corps to train on the Curragh of Kildare is a damning indictment. This undermines any claim for an independent Irish foreign policy when it becomes known throughout the world that this state allows a power currently at war to train in its territory and under the supervision of its military."

Sinn Féin has called for people to come out this weekend, as they did on 15 February 2003, to express once again how they feel about the US- and British-led war on Iraq.