The Strand's deputy mayor of Belfast 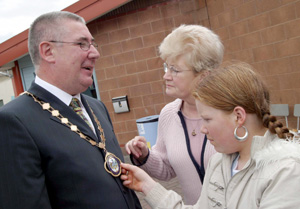 The old and the new faces of the struggle for independence linked together through continuity of service were very much on display last Sunday afternoon in Belfast's Short Strand area.

The occasion was a party organised by the people of the Short Strand to celebrate the election of Joe O'Donnell, Sinn Féin councillor for the area, as Deputy Mayor of Belfast.

For the people of the district and indeed for myself, coming from the area, it was quite a remarkable occasion.

'Unbelievable', 'fantastic', 'great', 'never thought I'd see it in my lifetime' were just some of the comments from the residents as we watched the Deputy Mayor stroll confidently with the chain of office around his neck into the community centre.

The election of a Sinn Féin councillor for the area three years ago was a tremendous achievement for the people, coming as it did after many years of trying.

To follow this with the election to the second most important civic responsibility in Belfast was an additional boost for the people.

The changing nature of the political times was not just reflected in the election of a Deputy Mayor for Belfast; it was there in the crowd of well wishers, in the photographic display inside the community centre and in the memories of those who lived through the dark days of the war since 1969.

Families of fallen IRA Volunteers Thomas O'Donnell and Gerard Bell, whose brother Jim was also killed by loyalists, mingled with the Bennett family, whose mother, Marie, lost her life with four other women and two men when loyalists bombed the Strand bar in April 1975.

Inside the community centre the photographs on the walls recalled times of great upheaval in the district's history.

The partition of Ireland and the violence used by unionists to consolidate it was unleashed on the people of this parish, which included what we now call the Short Strand.

Between 1920 and 1922, 50 Catholics were killed in the parish which included Ballyhackamore, the Woodstock Road, St Anthony's and St Matthew's.

It was a state-sponsored campaign of terror aimed at driving the Catholic and nationalist people out of east Belfast. The toll was heavy but the people hung on by their fingertips to an area the state wanted them out of.

In doing so they laid a firm foundation for the IRA, which has been a part of the community since then.

This existence was reflected in the photographs which show the aftermath of the internment raids by the British Army in August 1971 and the stiff resistance put up by republicans to the raids.

Burning buses, hijacked lorries, British Army vehicles, burning factories where no Catholics or anyone from the Short Strand worked, and long haired youths were images in the black and white photos.

Some of those long haired youths now in their middle years looked on with pride and pleasure as the Strand's Deputy Mayor smiled and waved.

It was an occasion for others who couldn't attend because of other engagements — Dickey, Harry, Nora, Johnny and Maggie, some of the people who made a difference in the early days and in some cases still are.

Also in my mind were those no longer with us but who were pillars of the republican struggle in the district and who would have thoroughly enjoyed the day: Susie, Ceile, Teasie, Ella, Aunt Una and cousin Mary, Maggie, Nellie and Kido, Davey McConnell, and Geordie Devlin, who sold Republican News for years.

I thought of those comrades from my time who fell: Gerard, Joseph, Rab, Gerard Steele, Martin, (Min) Eddie, Joey, Jackie, Francis and Joey. Part of the community's loss of almost 50 people since 1969.

These are, in Joe's words, our "bridges to the past".