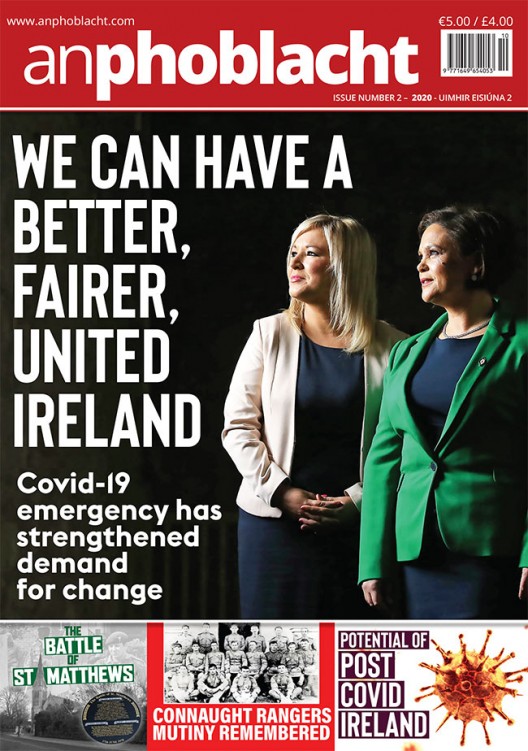 Ireland has been transformed amid the tragedies of the past months. We can see what a better, more inclusive Ireland could be. We must not let that vision go Free article

Young people twice as likely to be unemployed

YOUNG people are twice as likely to be unemployed as older workers, according to new figures showing the 26 Counties  has one of the highest rate of youth unemployment in Europe.

The Central Statistics Office figures also show that Dublin has been the worst region for both job losses and for businesses going bust in recent months.

THE Fianna Fáil/Green Party Government’s ‘Head Shops Bill’, debated in the Dáil this afternoon, is welcome but late and does not go far enough, Sinn Féin spokesperson for Justice Aengus Ó Snodaigh has told TDs.

He said that although the ban introduced in May was better late than never, the Government had performed disgracefully by failing to act for so long.
Ó Snodaigh said:

THE Orange Order should accept the reality of the situation regarding contentious parades  not wanted by local residents, play a part in the Peace Process and abandon attempts to walk down the Garvaghy Road to Drumcree, Sinn Féin MLA John O'Dowd said today.

"Such a move by the Orange Order woud be a huge step forward not only for the people of Portadown but the all the people... Free article

Adair is now living in Troon, in Scotland, after being exiled by the UDA/UFF leadership in 2003 following a power struggle within the loyalist organisation.

TONY BLAIR has been awarded the 2010 Liberty Medal with a prize of $100,000 by the National Constitution Centre  in Philadelphia, USA, for his work towards peace in Ireland and the Middle East.

IF someone said to you, there is a small group of people whose actions are designed to:
• Cause the remilitarisation of the Six Counties;
• See British troops back on our streets;
• See sectarian attacks carried out by loyalists;
• Close the democratic space now open to republicans;
• Reduce support for republican goals in Ireland and internationally;
• See an end to... Free article

Making inquiries in Derry and Gaza

THE world is about to witness the Israeli version of the Widgery Inquiry as the Israeli Government begins an investigation into the murders of nine peace activists on board aboard the MV Mavi Marmara, the Turkish peace ship bound for Gaza in an attempt to breach the illegal Israeli blockade.

The Mavi Marmara was part of a flotilla of ships... Free article

Economy: An unwanted leadership position ... and the alternative

IMPORTS have collapsed, foreign investment slowed to a trickle and tourism numbers plummeted, but the economic policy adopted by the Fianna Fáil-led government has gone global. It has never received so much attention or... Free article

Israeli aggression must be challenged

YOU may recall my meeting with Caoimhe Butterly of the Free Gaza Movement. On May 17th, I dedicated my blog to the story of the MV Rachel Corrie and the flotilla to the Gaza Strip. I’m glad I did.

But I never imagined what would happen to it.

I was on my way to an early-morning event in Tir Éoghan when the car radio broadcast the awful news of the death and... Free article