Emma McArdle challenges the recent claims by Kate Hoey, of an ‘elite nationalist network’, highlighting the reality of how Hoey’s comments are another chapter in a long chronicle of brutal suppression of nationalist rights and voices in the Six Counties.

2022 might have gotten off to a slow start in a lot of houses, mine included, as the surge of the Omicron variant confined many to an impromptu 10 day ‘staycation’. It didn’t slow Baroness Kate Hoey though, whose proclamation in her foreword to Jamie Bryson’s ‘Vetoing the Protocol’ article, casts doubt on the constitutional aspirations of educated, successful and professional nationalists.

Hoey’s remarks were carried in the ‘Unionist Voice’ website on 5 January. She wrote:

“There are very justified concerns that many professional vocations have become dominated by those of a nationalist persuasion, and this positioning of activists is then used to exert influence on those in power”.

Behind the sneer, what Kate Hoey, recently elevated to the position of trade envoy to Ghana by Boris Johnson, actually denigrates is the growing demand for self-determination by the people of Ireland. Her claims of ‘activists’ infiltrating the professional class in order to pressurise those in power is a distraction. The truth is that the demand for self-governance is growing among people of all backgrounds.

The people that Kate Hoey takes exception to have entered professional occupations due to hard work, intelligence, and the achievement of qualifications. The fact that some seek an end to British rule in Ireland is incidental.

Not content with her original remarks, the Baroness secured a platform in the ‘Irish News’ a few days later in which she doubled down on her assertion that an ‘elite nationalist network’ is at play in the North. She offers the absence of those in professional roles lobbying for the retention of the Union as justification that a covert nationalist network is in operation.

No one is preventing those who believe in the Union from putting forth their ideas and it would be a very welcome development if they did. Then we would have a proper debate about whether people’s interests, be they Irish, British or neither, are better served by remaining in the Union with Britain or in a new United Ireland.

The comments Kate Hoey makes are an attempt to silence those speaking about alternatives to the Union with Britain and to nullify the legitimate political aspiration of a United Ireland. She will not succeed.

The Good Friday Agreement guarantees parity of esteem for citizens who want Irish unity. It is entirely appropriate for nationalists and republicans from any walk of life to espouse these beliefs and to use whatever influence they have on those in power. It’s healthy and it shouldn’t be painted as subversive or orchestrated when in fact it is the opposite.

Kate Hoey’s remarks are not the first time that upwardly mobile nationalists have been targeted in this way. In her 2013 tour de force, ‘Lethal Allies: British Collusion in Ireland’, former journalist Anne Cadwallader uncovers irrefutable evidence of collusion between the sectarian Glenanne Gang and the RUC and UDR at the highest levels. 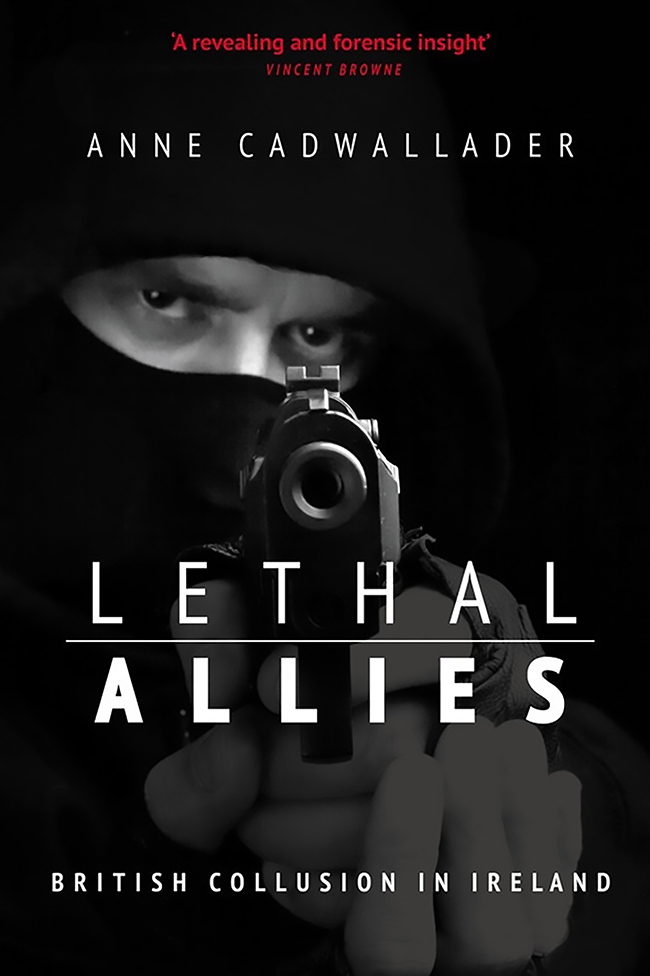 The documentary ‘Unquiet Graves’ is based on the book. The Glenanne Gang are believed to have been responsible for the deaths of 120 people and of that number only one, John Francis Green, was an IRA member, most had no political affiliations at all.

An extract from the book reads:

“An analysis of those who died…shows one very significant pattern. In cases where the killers deliberately singled out their victims, they were almost exclusively from that increasingly confident, emerging Catholic middle class, reflecting the social change that was spurred by the British 1947 Education Act providing secondary level schooling for all children from the age of 11.

“In all cases, with one or two exceptions, targeted victims appear to have been selected because they were doing well, moving up, prospering economically, building a new home or renovating an older one, or setting up in business.”

This sectarian group’s murder campaign lasted from 1972 to 1978 and it was responsible for the infamous Dublin and Monaghan bombings which took place on 17 May 1974 and resulted in the deaths of 33 people and an unborn full-term baby, Baby Doherty.

Other bomb attacks were carried out in the 26 counties by loyalists before this date and while many people at the time of the murders believed that collusion was at play, the Irish government did not pursue, save for very limited public statements, this line of enquiry.

In 1972, the Dáil was debating a controversial amendment to the Offenses Against the State Act which would permit conviction for membership of a proscribed organisation on the assertion of a Garda Chief Superintendent. Two bombs exploded in Dublin, Fine Gael changed their position and the amendment passed.

Last month saw the publication of the Police Ombudsman’s report into allegations of collusion in 19 murders and attempted murders, including those of Sinn Féin councillors Eddie Fullerton and Bernard O’Hagan.

This is the latest in a long list of reports which stretches all the way in the door of 10 Downing Street. Each report, from the Oireachtas report into the Dublin and Monaghan bombings, through Stalker, Samson, Stevens, Cory, de Silva, and now the Police Ombudsman’s report, indicate collusion between the British government’s armed forces and loyalist paramilitaries in hundreds of murders in Ireland.

• Long lists of reports on collusion, including into the murders of Sinn Féin councillors Eddie Fullerton and Bernard O’Hagan, stretch all the way to the door of 10 Downing Street

At the end of 2021, relatives of the Miami Showband who were murdered by members of the UDR and UVF received compensation from the British Ministry of Defence when they proved collusion was at play in the murders of three band members.

The Dublin establishment has never been comfortable holding the British government to account for its policy of collusion, or for any of the other long history of atrocities it perpetrated against the Irish people.

Incredibly, the attendance, though welcome, by Micheál Martin at the events in Derry to mark 50 years since Bloody Sunday, was the first time that a Taoiseach has been to that commemoration.

I hope the government steps up to the mark but its lethargy on all things northern would give cause for concern. In its constitutional obligation to reunite Ireland, the coalition government is also falling short. It fails to recognise the legitimacy of northern citizens. It will not let us vote in Presidential or any other elections. It will not give MPs in the North speaking rights in the Dáil.

Indeed, Fine Gael even describes its Northern members as ‘overseas members’! The establishment narrative equating the 26-County state to Ireland was also displayed through RTÉ’s inaccurate and insulting coverage of the centenary of the ‘end’ of British rule in ‘Ireland’.

The self-proclaimed ‘National Broadcaster’ has a long held the editorial line, that the state and the nation are one and the same. Access to RTÉ is not available in many parts of the North, most of the competitions are not open to entrants from the North, and Northern Gaelic teams don’t get their fair share of coverage.

RTÉ and the establishment would do well to remember that Ireland comprises 32 counties and our diaspora. The Irish border is the beach.