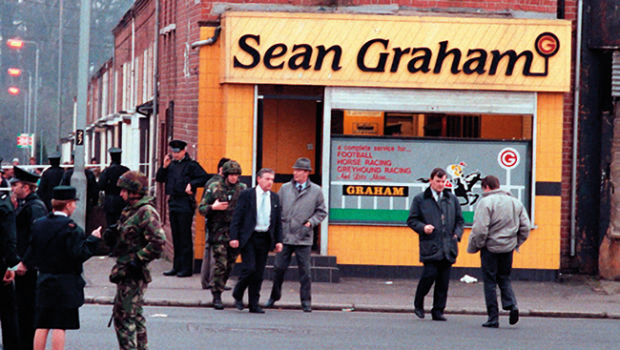 • The report showed the role played by the RUC Special Branch in controlling and protecting the UDA killers responsible for attacks across South Belfast, including the Sean Graham’s Bookies massacre

Following the launch of the Operation Achille report by Northern Ireland Police Ombudsman Marie Anderson, Peadar Whelan sums up the reactions, implications and limitations of this shocking publication

that left up to 50 people dead, killed by the UDA between 1990 and 1998 was just one of the shocking conclusions from the most recent report of Northern Ireland Police Ombudsman Marie Anderson.

Reacting to the publication of Operation Achille, an investigation into collusion between British state forces and loyalist gun gangs Director of Relatives for Justice Mark Thompson highlighted the limitations of Police Ombudsman Marie Anderson’s findings.

Speaking at a press conference on Tuesday 8 February Thompson, citing the Ombudsman’s admission that her inquiry could only investigate 9 attacks that left 12 people dead due to lack of resources, disclosed that the inquiry “touched on” 27 killings and attempted killings while also blaming the South Belfast UDA for 50 deaths in the period under investigation by Anderson, from 1990 to 1998.

Solicitor Niall Murphy of KRW Law, also addressing the press event organised after the publication of Operation Achille stated that the report “represents a further chapter in what must be considered a state policy of collusion”.

In their commentary of the report, handed to the families on Monday 7 February after numerous delays, and 30 years and two days after the Sean Graham’s Bookies massacre, Murphy and Thompson were scathing of the role played by the RUC Special Branch in controlling and protecting the UDA killers responsible for nine attacks across South Belfast, between 1990 and 1998 that lead to the deaths of 12 people.

The men were addressing the press conference, on Tuesday 8 February, attended by family members of those gunned down by UDA gun gangs and whose killings were the subject of the North’s Police Ombudsman, Marie Anderson’s, Operation Achille report including that on the Sean Graham’s Bookies massacre in 1992 in which five people were gunned down, and one attempted killing linked to the South Belfast UDA.

Anderson’s report found that the RUC was controlling and protecting as many as eight agents who were embedded in the UDA and were responsible for multiple killings and stated that the RUC was guilty of “collusive behaviour”. Thompson went further and accused the RUC of “actions which constitutes the wholesale running of a terrorist death squad”.

Indeed Thompson, as Director of Relatives for Justice which advocates on behalf of people killed by British state forces during the conflict, revealed that the ombudsman admitted she didn’t “have the resources to take on a comprehensive investigation” into these incidents before pointing out that “in the early 1990s UDA gangs across South Belfast were responsible for as many as 50 killings involving these same agents”.

He also focused on the limited scope of the Ombudsman’s powers saying “the roles of MI5 and the British army’s undercover intelligence gathering unit the Force Research Unit (FRU) were missing from the report”.

“These agencies are beyond the remit and powers of the Police Ombudsman’s office”, said Thompson before revealing that a number of the loyalist agents involved in the multiple killings “worked across these three agencies - Special Branch, FRU and MI5”.

Referring to the use of the term “collusive behaviour” Thompson outlined how repeated legal challenges to various Ombudsman’s reports launched by former senior RUC members, particularly the report into the 1994 Loughinisland massacre had limited the Ombudsman’s scope and prevented her from accusing former RUC members of the criminal act of collusion.

Indeed in a 2020 hearing a judge ruled that former Ombudsman Michael Maguire had “overstepped the mark” in finding RUC men guilty of collusion.

In his remarks solicitor Niall Murphy of KRW Law stated that “This report cannot be read in a vacuum, it must be considered in the context of other reports and the defence of ‘a few bad apples’ doesn’t work anymore, the whole orchard is stinking”.

“There was an endemic policy of collusion in South Down, South, West and North Belfast, South Derry, North Antrim and Mid-Ulster, different police districts at different times, with different informers, different handlers, different weapons and different killers and different UDR barracks but the same policy. The blueprint remained the same and that is evidenced in this report”.

He also mentioned the Da Silva report on the killing of Pat Finucane as well as John Stevens reports into collusion and that of Michael Maguire into the Loughinisland killings. The “evidence of collusion is undeniable”, said Murphy.

Among the findings of Operation Achille were those that reveal a clear pattern used by British intelligence agencies that allowed loyalist killers carry out their activities with impunity, not least, the failure to warn people of loyalist threats to their lives.

In the case of former republican prisoner Sam Caskey who was shot in October 1990 the RUC failed to warn him that he was under threat from the UDA. Also in the case of mother of two Theresa Clinton, gunned to death in her Balfour Avenue home on 14 April 1994, the RUC knew of at least three threats to the life of her husband Jim. Yet a senior RUC officer made the decision not to warn him that his life was in danger.

One of the most controversial aspects of the Clinton case is that a number of witnesses came forward and gave statements to the RUC identifying the suspected killer. These witnesses were willing to attend an identity parade but when they attended Donegall Pass RUC barracks they found there were no protective screens which meant the suspect could see and identify them. These witnesses also claimed that the RUC read out their personal details, names and addresses, in front of the alleged killer and so out of fear for their own lives the witnesses refused to continue with the parade. The suspect was released without charge.

Incidentally the guns used to shoot Theresa Clinton dead were a deactivated Sterling sub-machine gun which the RUC handed over to the UDA knowing that someone within that organisation, believed to be UDA quartermaster and RUC agent, William Stobie, had the capacity to reactivate the gun.

The Magnum revolver also used in the attack was “stolen” from an RUC officer in 1991. 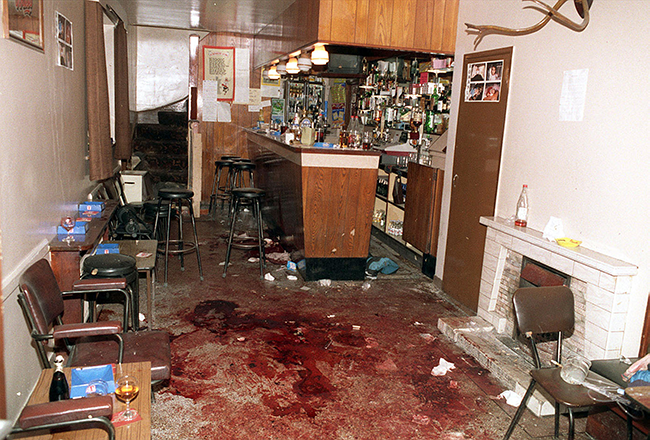 As with previous reports, not least the Maguire investigation into the Loughinisland killings of 1994 and Ms Anderson’s recent publication Operation Greenwich, the arming of Loyalist gangs with weapons imported into the Six Counties in the late 1980s from South Africa is crucial, particularly the ‘killing power’ the death squads attained through their access to the VZ58 assault rifle.

That the DUP linked Ulster Resistance movement was central to this smuggling operation tends to escape the media scrutiny it deserves.

Also that Brian Nelson a member of the British Army’s FRU and a UDA intelligence officer orchestrated the operation is also crucial to understanding the dynamic of British strategy in the late 1980s.

Arming the loyalists and using Nelson to target people, for example the targeting and killing of Pat Finucane whose anniversary occurred on 12 February, allowed the British to “take out” people they saw as a threat to their interests.

And in a grotesque example of the RUC’s disregard for those killed and injured in the Grahams Bookies attack the Ombudsman discovered that within weeks of the attack the RUC was in discussions with the British Imperial War Museum to ‘donate’ the killers’ assault rifle. It was eventually handed over in 1995 and in a macabre show of callousness to the families of the dead and wounded, it is on still public display.

If the story of the VZ58 is grotesque then the provenance of the 9mm pistol used in the killing of Aidan Wallace as well as the Sean Graham killings is incredible. The Ombudsman also uses the word “stolen” to describe how the semi-automatic pistol ended up in the hands of loyalist killers.

Quoting from the Da Silva report into the Finucane assassination Anderson says that Barrett was instructed by a Special Branch officer to go to Malone Road UDR barracks and collect the weapons. A UDR corporal cited in the report claims he got a phone call from “the training department” on 30 January 1989 saying two “identified soldiers” would arrive to collect the guns.

The next day Barrett and another person arrived at the barracks and the corporal handed over the weapons.

When the corporal arrived back on duty on 2 February and was told the guns “were missing” he, instead of reporting this immediately, waited until the next day, 3 February before going to his superiors. His excuse for not alerting his superiors to the situation was that he hoped the weapons would “turn up”.

This report and others presents a clear body of evidence that exposes the central role of Britain’s intelligence services in the planning, organising and recruiting of loyalist killers for the sole purpose of mounting a campaign of sectarian terror on the nationalist community in the North.

This evidence is a clear indictment of successive British governments and proves again the intention of this present British government to close down all legal avenues of investigation into these actions. It is about burying the truth of their dirty war in Ireland.

Main points of the Ombudsman’s report 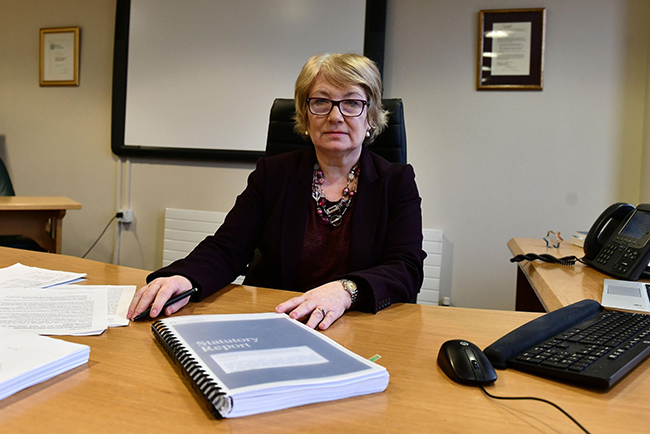 In her findings the Police Ombudsman found that the long-held concerns of the bereaved families and survivors about RUC conduct, including complaints of collusion with paramilitaries , were  “legitimate and justified”.