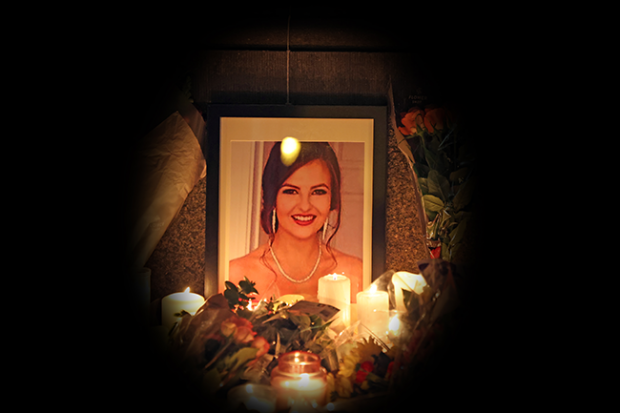 • This article is dedicated to the memory of Ashling Murphy

The use of this term, one might argue, is relatively novel in Ireland. The phenomenon itself is sadly not. A new way of describing, acknowledging, and challenging something that is as old as time itself.

If we’re honest with ourselves, the frank conversations about the prevalence of ‘gender-based violence’ are commonplace in the wake of one particularly shocking event, after which there is a tendency to go back to normal, to go back to sailing along, saying nothing.

Until the next time. The brutal murder of Ashling Murphy on 12 January struck a chord with our nation in what was described by many in the following days as a ‘watershed moment’. Thousands lined our streets to mourn her loss. Candles were lit in windows. Column inches were filled and leaders came together to call for change.

She was going for a run. A hashtag trending on Twitter, a slogan across Instagram stories, young women angry that this had happened, dwelling on their own evening runs.

At the heart of the reaction are two conflicting narratives. ‘She was just going for a run in the middle of the day’, ‘I do that, it could have been me’, ‘She didn’t deserve to be murdered’.

When I think about these often well-meant words, uttered at flower strewn roadsides and in candle-lit town centres by people with compassion and love in their hearts, the first question I find myself asking is ‘who does deserve to be murdered?’

An obvious, if unintended, inference in this commentary is that all those women killed by their partners, or their exes, or by strangers late at night, whilst socialising, or running alone in the dark, or walking home from work, ‘should have seen it coming’ or ‘left themselves open to it’. That it was their own fault. 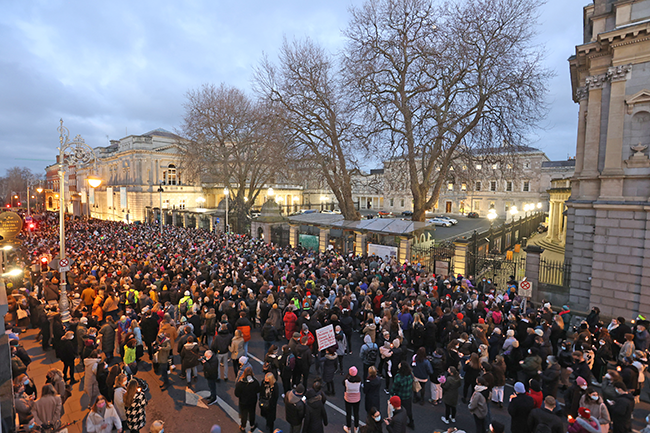 •  A vigil for Ashling Murphy outside Leinster House, Dublin

‘She was going for a run in the middle of the day in a public, well lit, densely populated place’. She followed all the advice that women grow up being bombarded with, the guidance we learn from childhood around ‘keeping ourselves safe’, and yet she still fell victim to a brutal attack that ended her life.

For those already enraged by the dialogue that surrounds violence against women and girls, the raft of responsibilities that little girls are tasked with in terms of personal safety, and the fact that victims are told what to do but perpetrators never seem to be addressed, the realities around Ashling’s murder led to more anger.

Ashling Murphy was a daughter, a sister, a girlfriend, a colleague and a friend. She was a teacher, a talented musician, a Gael. All of these things tell us that her short life brought value beyond measure to Irish society and that her loss will be mourned by many. But none of them were necessary for her death to be a tragedy, for her life to have had worth.

In speaking at length about her attributes and pointing to how she ‘did everything right’, we risk furthering the assertion that women can somehow bring violence on themselves.

In the same way that men shouldn’t have to conjure up a vision of their mother or sister or daughter as a victim in order to feel anger about it, we don’t need to justify anyone’s right to live in peace and safe from violence.

There have been 21 women murdered in Ireland since the beginning of the pandemic. The Six Counties has the highest reported domestic violence levels in Europe. According to the UN, women aged 15 to 44 are more at risk from domestic violence and rape than war, malaria, car accidents, and cancer. 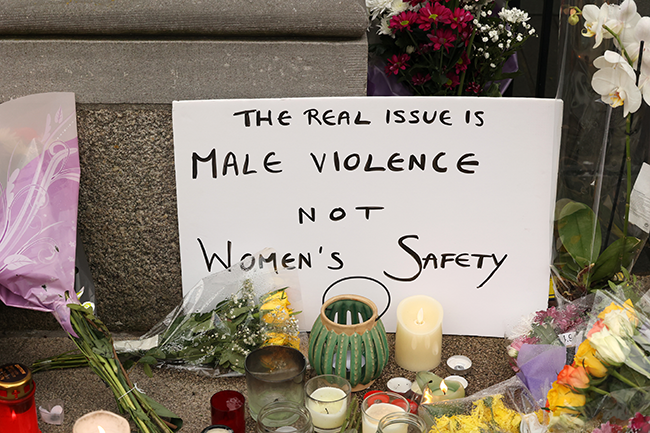 • Call it out: When people say things and make remarks, the belief that women are fair game is legitimised

We know that women who live in poverty and those from newcomer communities are most at risk, with fewer opportunities to escape violence and less recourse to justice.

The statistics are frightening.

How do we deal with it? Our current strategies, which have included arming teenage girls with rape alarms in social sciences classrooms and telling women to avoid public spaces at night, are clearly not working.

Ad campaigns that advise women how not to have their drinks spiked, to only go out with others, to plan their journeys home are not helpful. In fact, these instructions are an extension of the violence women are already taught to fear.

Just as online misogynistic abuse can simultaneously hurt one woman’s feelings whilst normalising the narrative that women are fair game for abuse, our society’s habitual victim-blaming not only burdens individual women, but feeds into the narrative that women are weak, defenceless creatures who require protection, and should expect to encounter risk just by virtue of their being there.

Ireland of old was governed by gender norms, societal expectations, and, perhaps most important of all, Catholic moral teachings. Violence against women was woven through the fabric of the states North and South.

‘Homes’ for ‘unmarried mothers’, Magdalene laundries, rogue adoption agencies, all of them attacks on Irish women and girls who weren’t even afforded the dignity of an education in relation to the bodily functions that they were then expected to navigate.

Even beyond the criminalisation of pregnant people, it remained a taboo subject, the nature of the reaction depending solely on marital status. A woman who dared to have children outside of (or too soon after) marriage was a legitimate target of scorn and ridicule, and a woman who dared not to reproduce the second that a ring went on her finger was someone to be pitied and questioned at length.

No babies until you’re married. And then as soon as you’re married, babies straight away. If not, why not? Is something wrong? Are you putting your career before your family?

The legislature in the 26 Counties made it impossible for women to work in the civil service following marriage, because obviously a woman’s role began and ended in the home.

Rape wasn’t a crime if the offender was your husband. Divorce was illegal. If she fled because he ‘was bad to her’, that’s what she did. No-one ever questioned why she had to suffer that in the first place. Those who made midnight ferry trips to England to avoid the punishment of their parents were actually criminalised and risked real prosecution if they ever revealed their secret.

Our culture has long told us that women are lesser, inferior, unworthy. It naturally follows that they’ll be the subject of attacks.

It goes beyond chatrooms and forums, it’s in our public discourse, and in our schools and playgrounds, which is the most worrying aspect of all.

Jokes about menstruation are commonplace. Stereotypes paint women as moody, physically weak individuals who have no control over their emotions at certain times of the month.

No education about many of the symptoms that women learn to accept; the irregular bleeding, the severe pain that might be a signal that something is wrong, the disorders that end up being medicated with a prescription for the contraceptive pill instead of an investigation and a proper cure. We still pay a tampon tax and period poverty is something that teenagers up and down the country worry about. 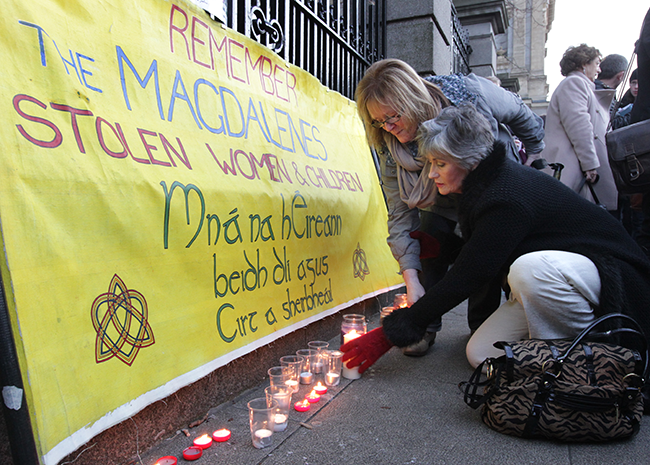 • Magdalene Laundries: Violence against women was woven through the fabric of the states North and South

Women distinguished in the arts, politics, sport, subjected to ridicule and abuse based on their physical appearance, their weight or what they wear, as opposed to their performance in their respective fields.

Internalised misogyny is so commonplace that women will frequently turn the same twisted words that have been used against themselves into insults or jibes for others. We’ve grown up with a discourse that is so prevalent that we don’t think about the phrases we use or how harmful they are.

Then when someone goes too far and there is resistance, the defence comes rolling in; ‘It’s only a joke, don’t be so sensitive’, ‘Cancel culture’, ‘You can’t say anything these days’. As with all the ‘isms’, and it’s no coincidence that those who use misogynistic slurs will often spout sectarian and racist bigotry, sexism needs silence to succeed.

Rather than defending the right to free speech at the expense of half the population, these are opportunities for us all to check ourselves, think about our words, and make improvements where we need to.

And we do all make mistakes. People say things and make remarks that they don’t really mean, without thinking of the impacts. The problem is that, every time rogue words and insensitive ‘jokes’ go unchallenged, the belief that women are fair game is legitimised.

There is space for us all to learn, and in doing so we must be examples, and show example. It’s not just lads’ banter. Call it out. Don’t laugh along when you know it’s not funny. Pull your friend for remarks about his significant other. Be a friend.

Don’t ask ‘where she was’ or ‘what she was wearing’ about a victim of an attack. We have made significant progress. Sexism is no longer accepted as an official policy of the state, but we have a lot to do if we’re to treat women as true equals.

Until we’re addressing the barriers faced by women, and implementing policies that ensure they have the same opportunity, we’re perpetuating inequality. And whilst we have inequality, we’ll have a target for misogynists. Misogyny causes and allows violence against women. Addressing it is the only cure for it.