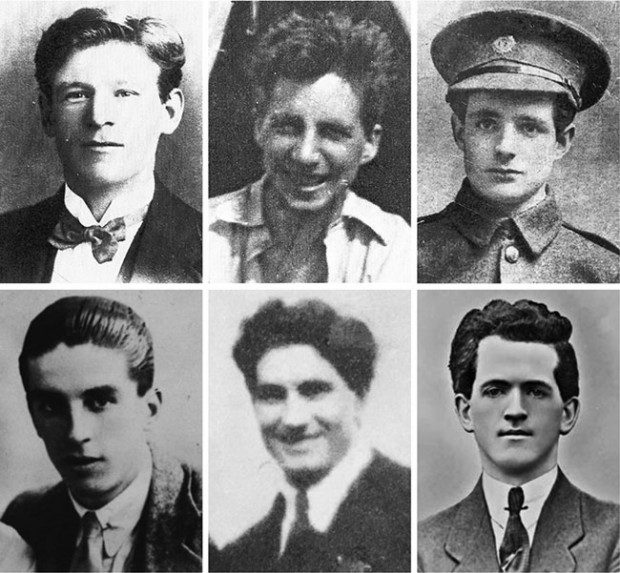 100 years ago the British regime executed six IRA Volunteers in Mountjoy Jail, Dublin.  They were hanged on the morning of 14 March as tens of thousands of people, including their families, gathered outside the prison and as hundreds of thousands of workers staged a half-day general strike in protest.

The six men were tried by the British Army at Field General Courts Martial in the Council Chamber of Dublin’s City Hall. The City Hall had been seized by the British Army the previous December because the City Council had pledged allegiance to Dáil Éireann and the Irish Republic. Now in a callous and calculated act, the very chamber where the Council met was used to put on trial six soldiers of the Republic, their judges being officers of the Army they had fought against.

Two of the men were charged with the killing of British intelligence officers on the morning of Bloody Sunday, 21 November 1920. Four were charged in connection with the Drumcondra ambush in January 1921.

As well as wreaking vengeance by killing 14 civilians at Croke Park on Bloody Sunday, the British rounded up hundreds of people who were thrown in Dublin prisons and Ballykinlar Internment Camp in County Down. The British were determined to secure convictions for the deaths of their officers.

One of those arrested in the aftermath of Bloody Sunday was Thomas Whelan. He was from An Clochán (Clifden), Co. Galway. He moved to Dublin where he worked in Broadstone Railway Station. He lived in Ringsend and joined E. Company, Third Battalion of the IRA’s Dublin Brigade. After his arrest Whelan acknowledged his membership of the IRA but denied any involvement in the Bloody Sunday actions. He was held in Kilmainham Jail and charged with the killing of British Army Captain Baggally in Baggot Street.

Whelan and three others were tried in City Hall on 1 February. Only Whelan was convicted, based solely on the evidence of a British officer who was in the house where Baggally was killed. He claimed to have identified all four men but was deemed unreliable in the case of three. In a statement to the court Whelan said he was “absolutely innocent of the charge” and was at mass in Ringsend at the time of the shooting, as several witnesses testified to the court. Nonetheless the court sentenced Thomas Whelan to death. 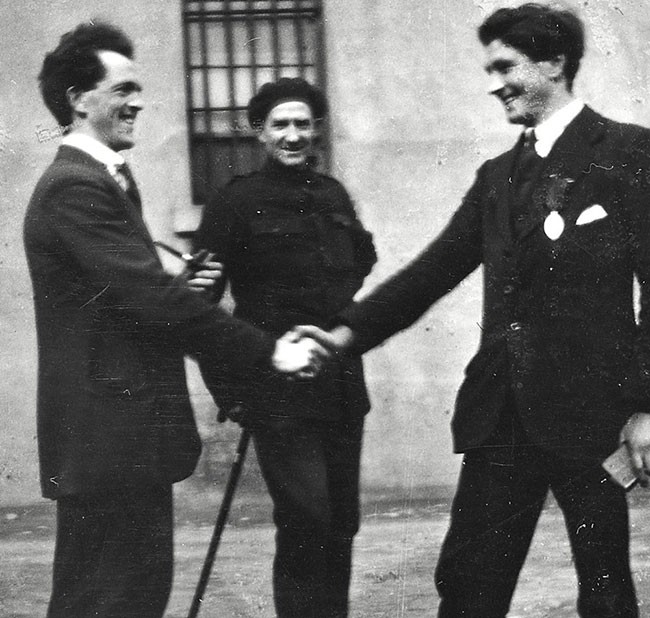 Thomas Whelan and Patrick Moran in Mountjoy Jail before their execution

Two weeks later there was a second trial by Court Martial in City Hall in connection with Bloody Sunday. Patrick Moran and Joseph Rochford were charged with killing British Army Lieutenant A. Aimes in Mount Street. The identification evidence in the case of Patrick Moran was even more threadbare than in Whelan’s case. The evidence of witnesses found to be unreliable in identifying Rochford was accepted as correctly identifying Moran. 17 witnesses for the defence were called to prove that Moran could not have been in Mount Street and he was seen and spoken to that morning at mass in Blackrock, on his journey into the city and at a union meeting. Witnesses for Moran included a Dublin Metropolitan Policeman , an English government official and a Redmondite opponent of Sinn Féin. It was to no avail. The Court Martial found Moran guilty and sentenced him to death.

The night before his trial Patrick Moran could have walked out of Kilmainham Jail. On that night Ernie O’Malley, Frank Teeling (already convicted for Bloody Sunday) and Simon Donnelly escaped. Moran was due to be among them but pulled out, not wishing to let down his witnesses and convinced that the case against him would collapse.

Patrick Moran was from Crossna, County Roscommon and had fought in Jacob’s Factory at Easter 1916. He worked as a barman in Dún Laoghaire and was a very active trade unionist. At the time of his arrest he was national president of the barmen’s union – the Irish National Union of Vintners, Grocers and Allied Trade Assistants.

On 23 February the Court Martial convened again at City Hall to try five IRA Volunteers captured at the Drumcondra ambush the previous month (see https://www.anphoblacht.com/contents/28008). They were Frank Flood, Patrick Doyle, Thomas Bryan, Bernard Ryan and Dermot O’Sullivan. No members of the British forces were killed at Drumcondra but the five were on trial for their lives because they were charged with high treason “levying war against the king in his realm”, the same offence for which Roger Casement was hanged in 1916. The trial lasted two days and all five were found guilty and sentenced to death. Dermot O’Sullivan was just 17 and his sentence was commuted to penal servitude for life.

In summing up, the presiding officer at the Court Martial spoke of “the existence in Ireland of a treasonable combination called the Irish Republican Army, or the Irish Volunteers, whose general aim is to promote rebellion by force of arms, to establish a Republic in Ireland and separate her from the United Kingdom”.

The men sentenced to death would have agreed with that description of the IRA’s aims. All were committed citizen soldiers of the Republic. Frank Flood, though only 19, had already proved his leadership as an officer in the Dublin Brigade’s First Battalion and as a member of the Brigade’s Active Service Unit. He led the Drumcondra ambush and the previous year he had participated in the successful IRA raid for arms on the King’s Inns and was in the shoot-out at Monk’s Bakery in Church Street when Kevin Barry was captured. Barry and Flood were friends and fellow students in UCD. The Flood family lived on Summerhill Parade and Frank’s brother Seán was in charge of IRA operations in England in 1920/21.

All the executions were tragedies for the men’s families but none more so than for Patrick Doyle. He was married to Louise Herbert from Glasgow and they lived at 1 St Mary’s Place, North Inner City. Their eldest child was Kathleen, their son Patrick had died of pneumonia in October 1920 and three days after her husband was sentenced to death Louisa gave birth to twin girls. 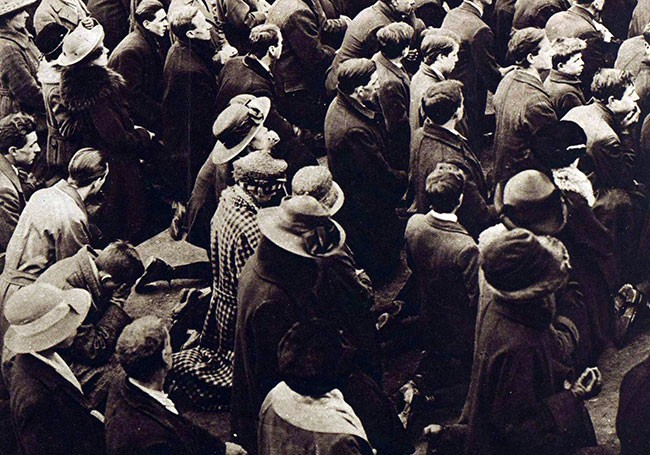 Crowd praying outside the jail during the executions

On Saturday 12 March, two days before his execution, Patrick Doyle was visited in Mountjoy by his wife Louise with Kathleen and the new-born twins whom their father was seeing for the first time. On the way home from the visit one of the twins, Louise Patricia, died in her mother’s arms on Berkeley Road. The child was buried in Kilbarrack Cemetery on the day her father died. Louise Doyle told a press reporter that her “lot had been hard indeed, and I don’t know why I should suffer, but this is the Lenten season and I offer the life of my husband and child to God’s holy keeping”.

Patrick Doyle, like Patrick Moran, was a committed trade unionist and a founder member of the Amalgamated Society of Carpenters, Cabinetmakers and Joiners. He was active in the Dublin Brigade since at least 1919. To compound the tragedy, Patrick Doyle’s brother, Volunteer Seán Doyle, was killed in the Custom House attack in May 1921.

Like Frank Flood, Bernard Ryan was a member of both the First Battalion and the Dublin Active Service Unit and was 20 years old. He lived in Broadstone and worked as a clerk. He played Gaelic sports, was a competitive swimmer and a member of Conradh na Gaeilge. He was in Croke Park on Bloody Sunday and witnessed the massacre by the British crown forces. 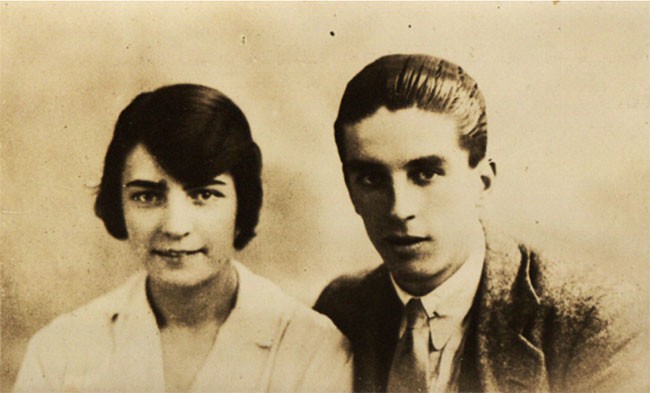 Though only 22, Thomas Bryan was in Mountjoy as a Republican prisoner for the second time. He was there first in 1917 when he was on hunger strike with Thomas Ashe, the first Republican hunger striker to die, as a result of force-feeding. Thomas was an electrician and lived at 14 Henrietta Street, now the Dublin City Council Tenement Museum. His sister Bridget was active in Cumann na mBan.

Though only 22, Thomas Bryan was in Mountjoy as a Republican prisoner for the second time. He was there first in 1917 when he was on hunger strike with Thomas Ashe, the first Republican hunger striker to die, as a result of force-feeding. Thomas was an electrician and lived at 14 Henrietta Street, now the Dublin City Council Tenement Museum. His sister Bridget was active in Cumann na mBan.

The date fixed for the execution of these six men was 8am on Monday 14 March. The men were placed in condemned cells in a part of Mountjoy Jail that was cleared of other prisoners. The English hangman Ellis was brought over to carry out the executions. It was arranged that they would be hanged two at a time. All appeals for their lives were refused by the British government. The Irish Transport & General Workers Union held a half-day general strike on the day of the executions. Many thousands of people gathered outside the prison in support of the men and their families.

If the British regime thought the execution of the six Volunteers in Mountjoy would intimidate the Irish people they were greatly mistaken as shown by the wave of grief and solidarity that ensued, as well as the stepping up of armed resistance to British rule by the IRA.

The six Volunteers executed on 14 March 1921 were buried in Mountjoy Jail yard, as were the four other Republicans executed there in 1920 and ’21. All ten bodies remained in the prison until they were reinterred in 2001.