The people want to see the Executive and Assembly delivering 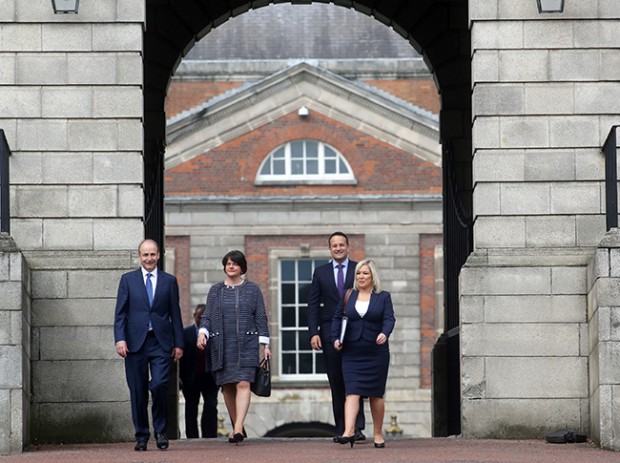 • The COVID-19 pandemic and Brexit looming reinforces the need for both the North South Ministerial Council and the British-Irish Council to step up their work to protect our economy, our rights and our peace agreements

With the establishment of the new Executive, a key part of the Good Friday Agreement and the political institutions it created was restored. The people made it clear to us that they wanted to see the Assembly and Executive up and running and delivering for them.

Throughout the coronavirus pandemic, ministers from North and South have been working together, recognising the protection we have as an island. That work continues as we balance easing restrictions, dealing with clusters and preparing for a possible second wave.

The North South Ministerial Council and the British Irish Council, both established under the Good Friday Agreement, are key to this all-Ireland cooperation.

There are still some, however, who have yet to fully embrace the letter and spirit of the Good Friday Agreement, more than two decades after its signing. Some are still refusing to respect difference and embrace equality.

The ongoing mockery and disrespect shown towards the Irish language and identity by senior figures within the DUP, and the failure of that party’s leadership to challenge such attitudes, shows how far some still have to travel.

That Agreement was endorsed by the majority of people across the island in referenda and successive elections and have since continued to show widespread support for the Agreement. It is long past the time that everyone, including those within political unionism who are still resistant, signed up to it and begin actively implementing it

The British and Irish governments too, as co-guarantors of that Agreement, have a role to play in ensuring its full implementation.

As well as the Good Friday Agreement commitments, pledges made in other agreements must also be honoured. Six years on from the Stormont House Agreement, which was agreed between the two governments and the main political parties, and the British government is still stalling and deliberately trying to frustrate its mechanisms on dealing with the past.

These were agreed and must be implemented in full. Families bereaved during the conflict have waited for up to 50 years for access to the truth about what happened to their loved ones. That is unacceptable. Agreements made must be implemented.

The same applies to the commitments made in the New Decade, New Approach document published by the British and Irish governments at the start of this year. It helped create the space to develop a new era of politics in the North and paved the way for the Executive and political institutions of the Good Friday Agreement to be re-established on the basis of genuine power sharing.

Both the British and Irish governments made many commitments in that document, including financial commitments and pledges on equality, that must now be implemented and resourced.

We made it clear there would be no return to the status quo at Stormont and the new Executive has shown that to be the case. In particular, the decision to establish a graduate entry medical school at Magee was a prime example of that. As well as addressing the absolute need for more doctors west of the Bann, it also had wider resonance, tackling the legacy of neglect and regional inequality.

However, there is still much more work to do. When the Assembly returns after the summer recess, as well as continuing to deal with the ongoing impact of the coronavirus pandemic and the rebuilding of our economy, there will be major outstanding issues to resolve.

The commitment to delivering and enacting legislation to protect the rights of Irish language speakers is a priority. This legislation is key to demonstrating that this is an Executive for all and that there is a new era of politics in the North.

It threatens no one and will only serve to enrich our society. Those who think otherwise have bigger issues they need to address around respect for identity and equality. Leadership will be key in all of this.

We will also be facing the looming prospect of a Brexit that the people of the North did not want and the Assembly does not support. The catastrophic economic impacts of Brexit are plain for all to see, just as they were ahead of the referendum.

The business community in the North have been crying out for information and answers on what post-Brexit trading arrangements will look like and, to date, all they have got from the British government and their Brexit supporting allies has been more confusion.

Unique protections have been secured for the North in the Irish Protocol and Withdrawal Agreement which protect our economy, avoid any hardening of the border on the island of Ireland, and protect the Good Friday Agreement. These must be maintained whatever happens.

The shortsightedness of the British government in not asking for an extension to the Brexit process as a result of the COVID-19 pandemic was yet another example of the disdain and disregard with which it treats the North.

And it also reinforces the need for both the North South Ministerial Council and the British Irish Council to step up their work to protect our economy, our rights, and our peace agreements. Brexit has also led many people to look at their future and to imagine new realities. The debate around Irish unity, which was already underway and gathering pace, has been accelerated by Brexit.

People who previously may not have been supportive of reunification are now looking at it as a way back into the EU and a way to create a better and more representative island for everyone.

With the British government recklessly pursuing its disastrous Brexit policy without any thought of its impact on the North and with the new right-wing alliance of Fianna Fáil and Fine Gael in the South, people are looking for a better way.

We have entered a decade of opportunity where the new Ireland, a united Ireland, is within our grasp. The Good Friday Agreement, voted for by people North and South, contains provision for a referendum on Irish unity, North and South.

Such a referendum offers a clear and democratic pathway to Irish unity. It also provides space for a reasoned, mature and inclusive debate on what a new Ireland would look like. And no one has anything to fear for that discussion.

Our aspiration for Irish unity is legitimate. So are the views of those currently opposed to unity. That is why we need the debate and discussion around it and why we need the Irish government in particular to get involved.

Claiming that the time is not right or waiting around until Britain loses interest in the North simply does not make sense and is an insult to our legitimately held views.

Referendums will not be won by platitudes and warm words. It will require action from the Irish government and that will require political will which has been lacking to date.

As a first step, we need to see this Irish government step up to the plate, in line with its responsibilities, and actively begin preparing for unity.

It can do this by establishing a Joint Oireachtas Committee on unity, by bringing forward a white paper on the issue, and by convening a citizen’s assembly inclusive of the entire island to discuss reunification.

It is within our grasp and it is achievable. We now have to go out and secure the referendum and win it.