A new wave of protest music is here 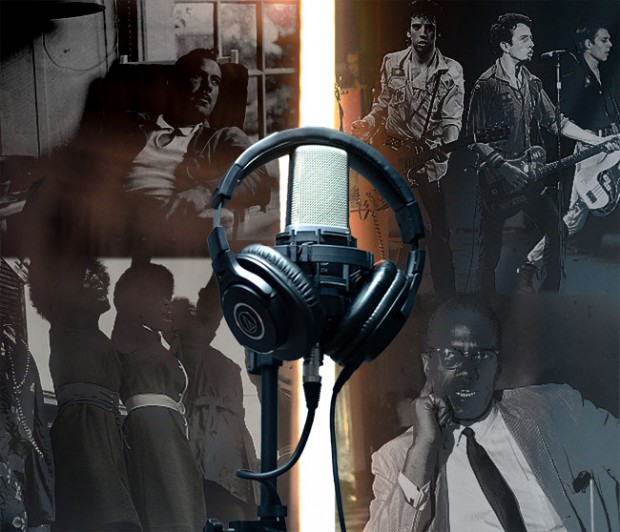 There is a Chinese saying “may you live in interesting times.” It sounds like a blessing but it’s actually a curse, we are living in those interesting times. This year has managed to compress a century of history into it so far. Australia was on fire. Iranian General Soleimani was killed by an American drone strike threatening WW3. A Ukrainian airliner crashed in Tehran. Kobe Bryant died. The WHO was notified of Covid-19 by China. The UK withdrew from the EU.

I believe it is those same interesting times that will materialise an era of protest songs and politically motivated music. This is of course only natural. What else but interesting times could have possibly inspired the music of Pete Seeger’s civil rights and social change anthems, or Bob Dylan who spearheaded the 60s’ folk revival which saw the careers of Son House and others reborn. Woodie Guthrie the Dustbowl Troubador was singing to the same people John Steinbeck was writing about, or the song ‘Strange Fruit’ by Billie Holiday, the Strange Fruit in the song being the black bodies hanging from a lynching tree. The horror that inspired that song must have stayed with the composer for life. “Southern trees, bear strange fruit. Blood on the leaves, and blood at the roots”.

What else but interesting times could birth the fury of ‘Fuck The Police’ by N.W.A. a group of young black men living in 90s Compton, a suburb of L.A. plagued by police and gang violence, where social mobility is a complete fantasy and the reality of life is tempered by violence, jail, death and addiction.

Eventually riots grow out of protests, the city literally lit on fire after the police were filmed almost beating a man called Rodney King to death. In New York Public Enemy living under the same pressures writes ‘Fight The Power’, more overtly politically motivated and inspired by Malcolm X, Fred Hampton and the Black Panthers.

They even mimicked the faux military discipline of the Black Muslims in their stage show. Chuck D’s lyrics of protest against racism and inequality inspired a generation of socially focused rockers from Manic Street Preachers to Rage Against The Machine who in turn rail against inequality and US foreign policy.

Public Enemy’s willingness to openly reference the language of revolution saw them become vilified in the world press as something akin to travelling hate preachers. They were an open threat to the post-war boomer generation who saw themselves flourish under FDRs’ new deal. A time that left black America to rot under the boot of the J. Edgar Hoover’s FBI. His agents infiltrated every attempt by the working class to unite, from the Communist Party of America in the 30s to The Black Panthers in the 60s, and the even more recent Occupy Wall Street movement in 2011.

Inevitably, protest ended up in the mainstream and peaked with Marvin Gaye’s masterworks and according to Mark Anthony Neal, the American author and academic; “I maintain that Gaye’s trilogy of recordings, ‘What’s Going On’, ‘Trouble Man’, and ‘Let’s Get It On’, aurally document the demise of the black protest movement.” And it was done in the Billboard charts.

Of course we’ve always had protest songs, what else is folk music. In Ireland some of our greatest trad songs could be described as protest, even the ancient ones. ‘After Aughrim’s Great Disaster’ to ‘The Men Behind The Wire’ which most definitely is a protest song.

In recent times, coming out of the UK in a response to ten years of Tory austerity, the punk rock of Idles lit a spark under a generation who have never had a protest movement of their own. The English musicians have captured a mood in the countries youth that saw tens of thousands singing ‘Oh Jeremy Corbyn’ at Glastonbury pinning onto him their future hopes.

They are a generation left wondering why they have it harder than their parents, why they’ll never own a home, have a job for life or why the NHS that raised their parents was gutted.

They are left wondering why the European identity that they considered normal was most violently ripped from them in a tidal wave of lies and misinformation exposing the political class as Machiavellian charlatans to a generation of youth that have been newly engaged only to be newly disengaged come the general election. It is a solace that those children should spew out a band like Idles that are every bit as irreverent, smart and questioning as Joe Strummer ever was. The conditions that created The Clash and Idles are not that different. 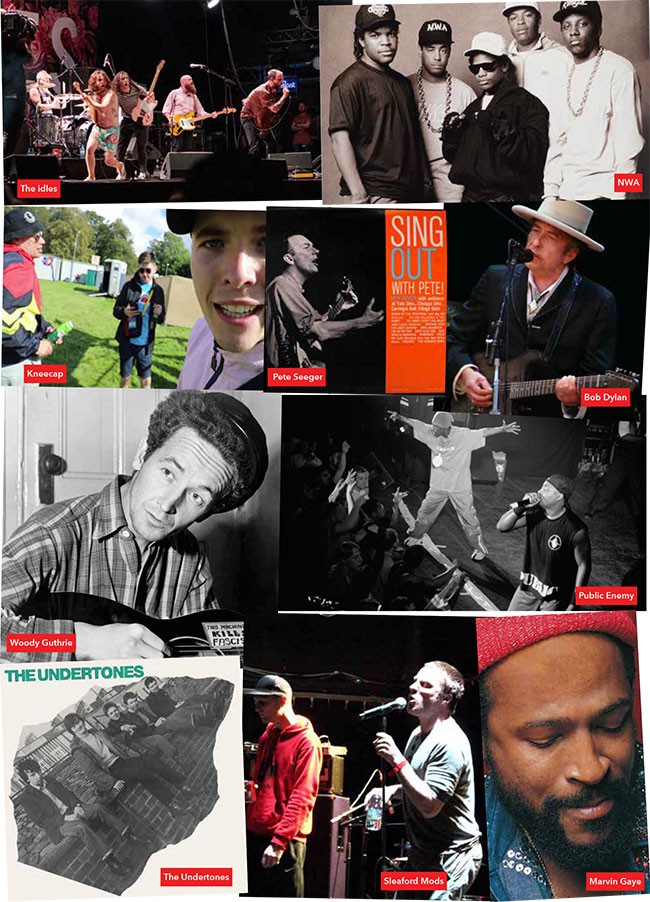 Thankfully, we in the North don’t have the same conditions today that gave us the Ulster punk scene. Joe Strummer the godfather of punk said of it “London had the haircut, Ulster had the reason”. The shambolic Terri Hooley and his Good Vibrations label gave us The Undertones and Rudi. Then everyone was a punk and we got the anthem of a generation of Troubles babies Stiff Little Fingers’ ‘Alternative Ulster’.

While we’re talking about the smart, weirdness, wit and social commentary in the lyrics of protest music, Sleaford Mods comes to mind. Jason Williamson’s observations are everything punk and poetry should be at its very best all delivered on an EDM beat but enjoyed by everyone from old mods to metalheads.

I would argue that all the best music is or has within it a form of protest. It is the awareness of the wrongs in our society that when expressed becomes art and a record of sorts that future generations can reference. The pointlessness of the Katy Perry’s and the Taylor Swifts of this world are exposed as just that when compared to Kneecap, a Belfast hip hop group. They rap as Gaeilge about things that only a Belfast youth can talk about, with songs like ‘Get Your Brits Out’ or ‘C.E.A.R.T.A.’ - about the Irish Language act that brought down the Stormont assembly. They were supposed to be on a North American tour this year then the Covid pandemic hit.

The same as Sleaford Mods, they have no business sparking the interest of anyone outside their local boozer where they would be considered weirdos or cranks but they fill venues all over the world. They are a headliner and they are brilliant but if they were singing about whatever Katy Perry sings about we would never know who they are.

This leads me to wonder what the future brings, there must be a wave of protest songs coming. Young people all over the world think their parents generation have failed them and are lashing out. Here in Ireland the Connolly Youth Movement are occupying buildings in Cork, Extinction Rebellion aren’t asking for permission and internationally Greta Thunberg is calling the U.N. out to their faces.

Socialism is making a comeback. It was inevitable. The inherent failings of capitalism that Marx warned us about are now unavoidably obvious and it is only natural that a generation that considers the system a failure looks to whatever the alternative of the current State for answers.

Writing about anything that does not have a commentary attached seems trite these days, the idea of your output being potentially important is positively glowing in the dark. On the upside, it will not be boring and we will get some great music from it. I am reminded of Orson Welles’ monologue from ‘The Third Man’.

“In Italy, for thirty years under the Borgias, they had warfare, terror, murder and bloodshed, but they produced Michelangelo, Leonardo da Vinci and the Renaissance. In Switzerland, they had brotherly love, they had five hundred years of democracy and peace – and what did that produce? The Cuckoo Clock. So long Holly”.

Andrew McGibbon is in The Bonnevilles, host of the Andy That’s In the Bonnevilles Podcast and is releasing a solo album this year.