From Spanish Flu to Covid-19 – lessons from history 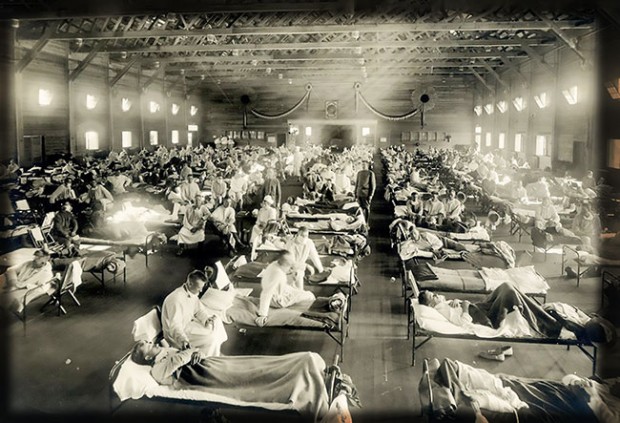 Under British rule but in the midst of the struggle for independence, Ireland, like many other countries, was caught unprepared when the flu pandemic of 1918 hit.

The 1918 pandemic was a catalyst for the development of public health systems in many countries. As that pandemic and epidemics of infectious diseases drifted from our living memories, health systems in Ireland and elsewhere came under pressure to be privatised. For example, the EU Commission demanded cuts to public healthcare in Ireland 63 times from 2011 to 2018. The Irish health service, with its mix of public and private and lack of capacity, was neither prepared nor fit for the Covid-19 pandemic.

The Spanish Flu, as it was commonly known, hit Ireland in three waves from the summer of 1918 to the spring of 1919. It was a tumultuous period in Irish history, taking in the General Election of 1918, the rise of Sinn Féin and the establishment of the First Dáil Éireann in January 1919.

Volunteer Richard Coleman who had taken part in the 1916 Rising and newly elected as the Sinn Féin TD for Tipperary Pierce McCann both died from the flu in prison, increasing public pressure for the release of republican prisoners. Dr Kathleen Lynn of the Irish Citizen Army was released from prison to help tackle the outbreak. 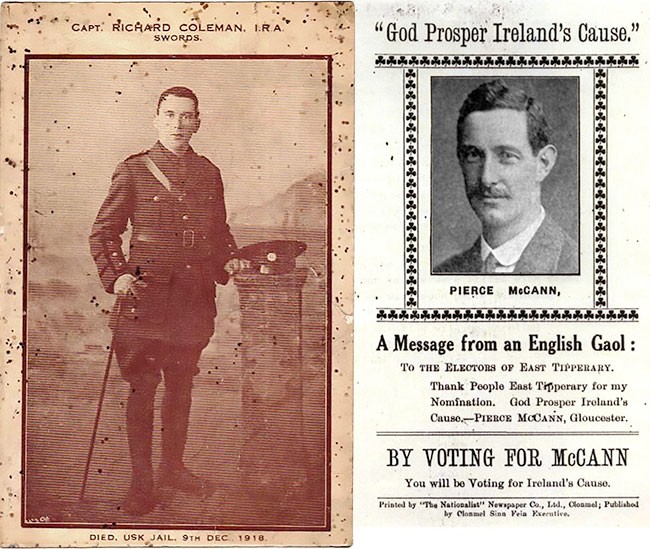 Despite the significant loss of life, the impact of the ‘Spanish Flu’ in Ireland got little attention until recently. Two books published in recent years ‘Stacking the Coffins: Influenza, War and Revolution in Ireland 1918-1919’ by Ida Milne, and ‘The Last Irish Plague’ by Catriona Foley have addressed this deficit.

‘Stacking the Coffins’ includes interviews with people who had lived through the pandemic as children recounting the trauma and fear caused by the pandemic. It concludes that, “the absence of a national influenza narrative of any sort, written or oral, elongated their trauma”. 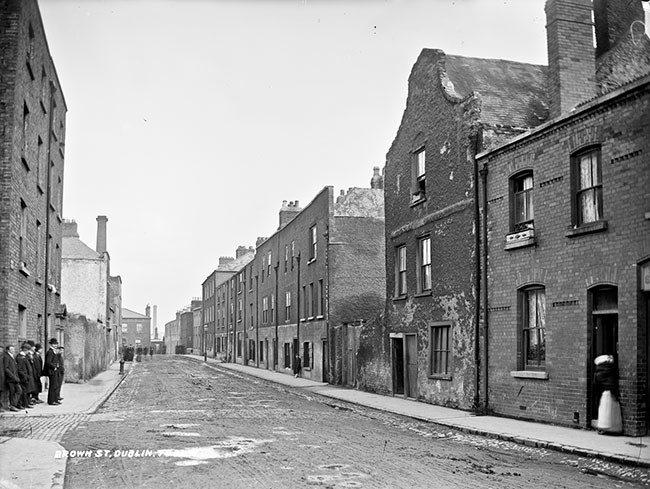 The first wave of the flu which arrived in Ireland in the early summer of 1918 was generally mild with those who fell ill experiencing typical flu symptoms, sore throat, headache, fever, chills and fatigue. However, the second wave which arrived in the autumn was the deadliest – victims died within hours or days of developing symptoms, their skin turning blue or black and their lungs filling with fluid that caused them to suffocate. Because of the blackening of the skin of those infected, it was sometimes referred to as ‘the black flu’.

There was no test to diagnose the infection, no effective vaccine, no antiviral drugs and no antibiotics to treat the bacterial complications of the flu. The fear of the flu was accentuated by the fact that it was not just killing the old and the vulnerable - there was a particularly high death rate amongst young healthy adults aged in their twenties and thirties. There were calls for soldiers returning from the battlefields of the First World War to be quarantined as it became clear they were bringing the flu back with them. Dr Kathleen Lynn described the front at Flanders as a ‘factory of fever’.

There was little agreement within the medical profession on the most effective way to treat the flu. Whiskey was widely used while tonics, cough medicines and poultices were sold by pharmacies. While bed rest was seen as the most effective response, all kinds of other ‘cures’ including the use of snuff were promoted. 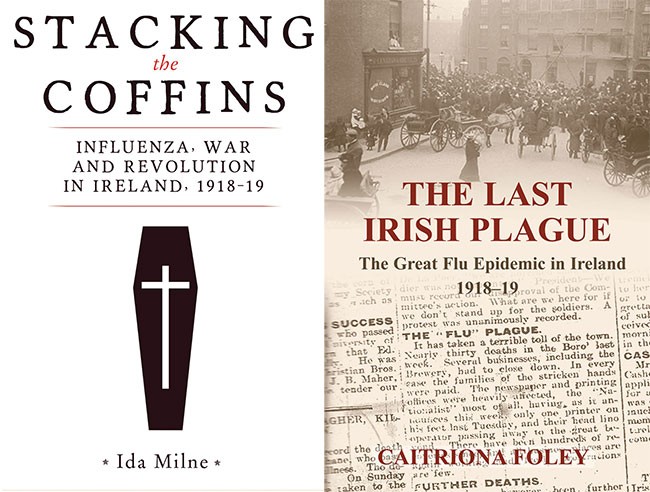 Belfast and Dublin were badly impacted and were the first to experience outbreaks. Leinster and Ulster were worst affected; particularly the counties of Kildare, Dublin, Wicklow, Wexford, Carlow Antrim, Down, Armagh, Monaghan and Donegal. The ports of Dublin, Dundalk and Wexford which connected Ireland to Britain are thought to have played a major part in Leinster’s high death rate. In Belfast high levels of urbanisation with factory workers in close contact was a factor. Seasonal migration was associated with outbreaks in Donegal and Mayo.

Postmen, shop workers, medical workers, priests and those whose jobs brought them into contact with large numbers of people were more likely to catch the disease and die.

While Milne in ‘Stacking the Coffins’ notes that it was job rather than class that made you more likely to catch the flu, she does point out that in the two deadlier waves in Dublin there was a class element for mortality from the flu with the working classes experiencing a higher death rate. The pandemic added to an already dire situation in Dublin with overcrowded tenements and high child mortality rates.

Across the country children were orphaned, families were left without a bread winner, and family and economic circumstances altered. There were cases where families lost all of their children to the flu. Business and shops closed as workers fell ill.

Now looking back, we see many similarities to the Covid-19 pandemic. We see that, now as then, the essential workers at the frontline, from health workers to retail workers are the most exposed. We see that factories without social distancing are at particular risk form outbreaks. We see that overcrowded and congregated accommodation are a health risk as social distancing is not possible. 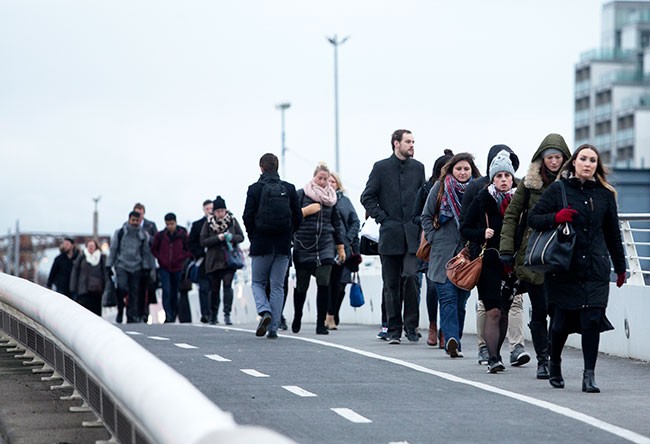 • This pandemic could be a turning point in the battle for improved workers’ rights, for greater equality and for wealth distribution

We now see clearly that the absence of strong public health systems impedes the ability of Governments to respond to epidemics such as Covid-19. Neoliberal advocates of private healthcare sought to make us individually responsible for our healthcare but when a pandemic strikes, to protect the health of one we must protect the health of all. We must emerge from this crisis taking the sense of solidarity demonstrated by communities across Ireland and build a national public health system free and accessible to all. Healthcare, childcare and eldercare are essential public services and must be removed from the realm of private profit.

There are also other lessons which we must learn from this pandemic. We must make it a turning point in the battle for improved workers’ rights, for greater equality and for wealth distribution.

If we don’t fight for stronger trade union rights, we risk a dystopian future where blue collar workers go to work during pandemics while the better off remain cosseted and safe. The plight of Amazon warehouse workers while Jeff Bezos’ increased wealth bringing him to the cusp of being the world’s first trillionaire gives us a glimpse of such as future. The outbreaks of Covid-19 in workplaces with low paid and migrant workers tell us that we must empower workers in order to protect their health and safety.