Referendum on Irish Unity is achievable and winnable 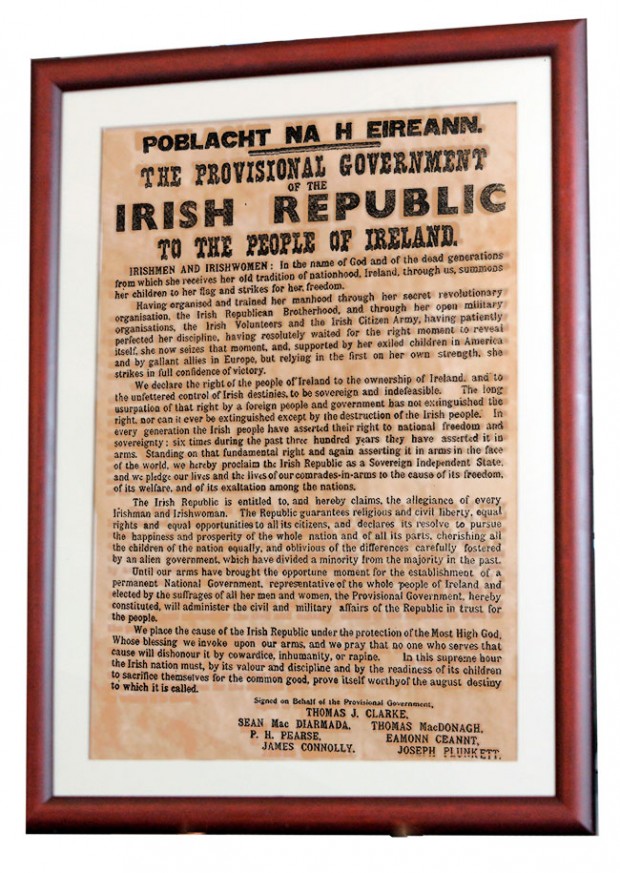 In the wake of the Coronavirus crisis that highlighted yet again the linked day-to-day reality of life on the island of Ireland, Gerry Adams considers how the pandemic threw into sharp relief the need to stay focused on the campaign for a United Ireland. In this ‘decade of opportunity’ Adams tracks the actions and planning that brought us to this point, from ‘A Scenario for Peace’ in 1987, the 1998 Good Friday Agreement to Sinn Féin’s 2005 ‘Green Paper on Irish Unity’, so that now the issue of a referendum on unity is centre stage.

Republicans understand the challenges and difficulties created by Brexit and Covid-19. Each of these issues have dire consequences for the people of the island of Ireland. We are very aware in particular, at this terrible time, of the destructive power of the global pandemic. And as Brexit comes back to centre stage, all of us need to be very alert to the real dangers posed to Ireland, North and South, by the Little Englander approach of Boris Johnson and the myopic view of some in the DUP. We are also very conscious of the injustice of Partition and of its damaging dynamic, historically and currently, for all of us.

But despite all this, we also need to appreciate the opportunities for positive change which have opened up before the pandemic and which will continue to open up in the time ahead. With the understandable focus on the pandemic this may at times be slightly below the radar. But it is there nonetheless. Mary Lou McDonald in her Presidential Ard Fheis address in Derry last November described this period as a “decade of opportunity.” She was right.

But without national freedom the 32 county Republic – The New Republic - envisaged in the 1916 Proclamation, cannot be delivered. This has been a constant mantra of republicans. In more recent decades and especially during countless negotiations around the Peace Process it was a central tenet of our political strategy. We have been consistent on this. It is not a new position.

For example, in my first meeting with John Hume in September 1986, I put it to him that we needed to cooperate to get the British Government to set aside the Government of Ireland Act. This was the Act by which Britain claimed sovereignty in Ireland. In 1987 Sinn Féin published ‘A Scenario for Peace’. Among other initiatives it called for an all-Ireland Constitutional Conference that would seek agreement on a new constitution and system of government. We called for the British government to repeal The Government of Ireland Act.

In February 1992 Sinn Féin published ‘Towards a Lasting Peace’ in Ireland. At a time when no one else was discussing the possibility of peace, Sinn Féin called for a Peace Process and spelled out a strategy to achieve it. In a very significant shift, we placed the onus for progress on the two governments. 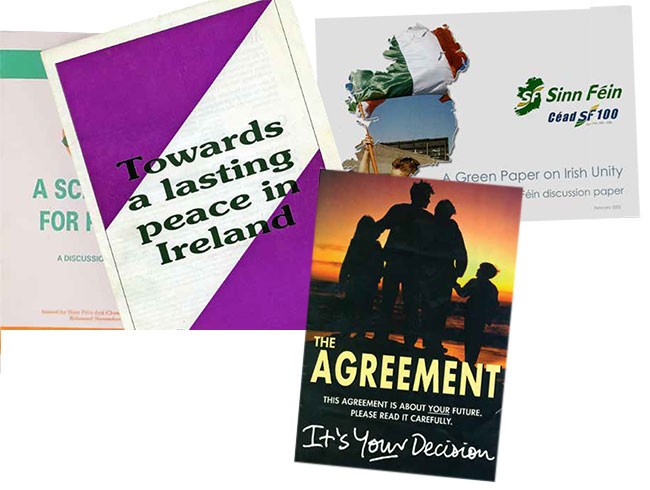 Six years later, on March 9th 1998, a few weeks before the Good Friday Agreement was achieved, I said that nationalists want an “effective, peaceful, political strategy” to achieve a United Ireland. This means an alliance of Irish political parties, with the “Irish government playing a leadership role”, and with a “common position worked out between Dublin, the SDLP and Sinn Féin”.

During this time, Sinn Féin consistently pressed both governments to end the Government of Ireland Act. In our first meeting in Downing Street in 1997 the Sinn Féin team told the British PM Tony Blair that a new Act was needed to allow for an end to British rule in a manner that was least disruptive and most beneficial to all the people who live on the island of Ireland.

We again called for the Government of Ireland Act to be scrapped. Our hard work paid off when in the Good Friday Agreement negotiations the Government of Ireland Act was replaced by legislation which declared “that if there were majority consent for a united Ireland that wish should be given effect.” Sinn Féin’s view was that the unionist veto had to end; consent had to apply both ways. It is not just unionist consent but nationalist and republican consent as well.

In the two decades since then – while engaged in peace-making, multiple elections, taking our places in the political institutions and all that this involves in terms of energy, capacity building and so on, we have pressed the Irish government to seek the referendum on unity set out in the Good Friday Agreement and for it to plan for unity.

In 2005, Sinn Féin published ‘A Green Paper on Irish Unity’ in which we called on the Irish government to publish its own Green Paper “and to begin the practical planning for Irish unity now.”

In 2017, I said: “There is an onus on the Irish government to prepare a real plan for unity. A first step in this would be the development of an all-party group to bring forward a Green Paper for Unity. In addition, plans should be developed for an all-island National Health Service and for all-island public services through a United Ireland Investment and Prosperity Plan.” 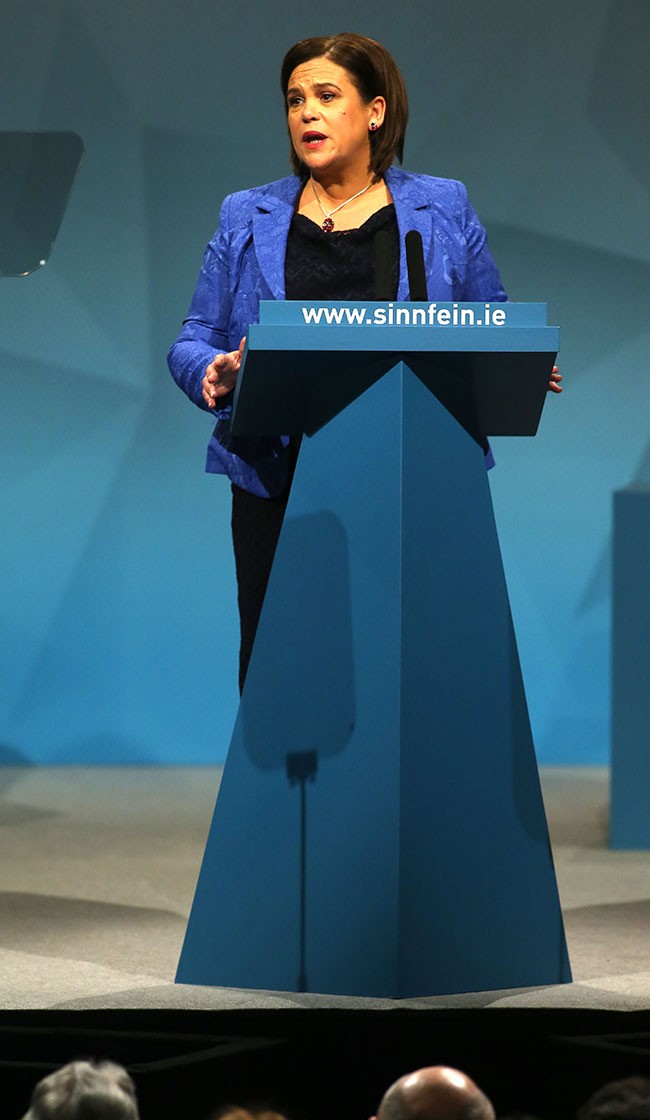 • At the Sinn Féin Ard Fheis in Derry, Mary Lou McDonald described this period as a ‘decade of opportunity’ and she was right

These are just a few of the many occasions on which Sinn Féin set out the next steps that should be part of any process toward Irish Unity. It’s all about planning. The Irish government and all those parties which claim to aspire to Unity have to plan and plan and plan again for the ending of Partition and the creation of The New Republic. We must hold the widest possible discourse to ensure the strongest ownership by the maximum number of citizens to the changes that are coming.

Sinn Féin activists especially need to remind ourselves that we are in the national liberation stage of our struggle. This is the context for our strategies and the development of policy. Without national freedom and an end to British rule we cannot attain the core commitment in the Proclamation, which “guarantees religious and civil liberty, equal rights and equal opportunities to all its citizens, and declares its resolve to pursue the happiness and prosperity of the whole nation and of all its parts, cherishing all the children of the nation equally”. Without these we will not build The New Republic.

So, the issue of a referendum on unity is now centre stage. No other generation of Irish republicans has had this peaceful opportunity to end the Union with Britain and Partition. The men and women from 1798 to 1916 had no such mechanism. Neither did Bobby Sands or Mairéad Farrell and their contemporaries.

Despite resistance from both governments and the main unionist parties, a referendum WILL be held in the next few years. The drivers for this are the failure of Partition; the social and demographic changes in the six counties; the politicisation of sections of the community there; the focus on rights, and the threat Brexit poses to our economies and to the Good Friday Agreement. Irish Unity is no longer an aspiration. It is achievable.

The unity referendum by which it can be achieved is now a daily topic of political debate. The Irish Government has a duty and a constitutional obligation to make preparations for Unity. It needs to encourage the debate through a process of inclusive dialogue and to persuade those – unionists, nationalists and others – who have reservations about unity - that Irish unity makes sense for them, their families and for the future.

Of course the leaderships of Fianna Fáil and Fine Gael and the Irish establishment are deeply Partitionist. They enjoy the power which a Partitioned Ireland has given them since the establishment of the 26 county State. As we have seen they will not easily give up that power. If they succeed in forming a government at this time it is certain that they will pay only lip service to their constitutional obligation to promote the unity of the people of this island and to uphold and implement the Good Friday Agreement.

That’s where we – and all the other United Irelanders - come in. We need to campaign for the Irish government to:

Planning for Irish Unity is primarily, though not exclusively, the responsibility of the Irish Government. That process should begin now. I believe a referendum on Irish Unity is achievable and winnable. It is time to set a date for the referendum and to let the people have their say.

The unity of the people of the island of Ireland and an end to the Union with Britain is now a do-able project.