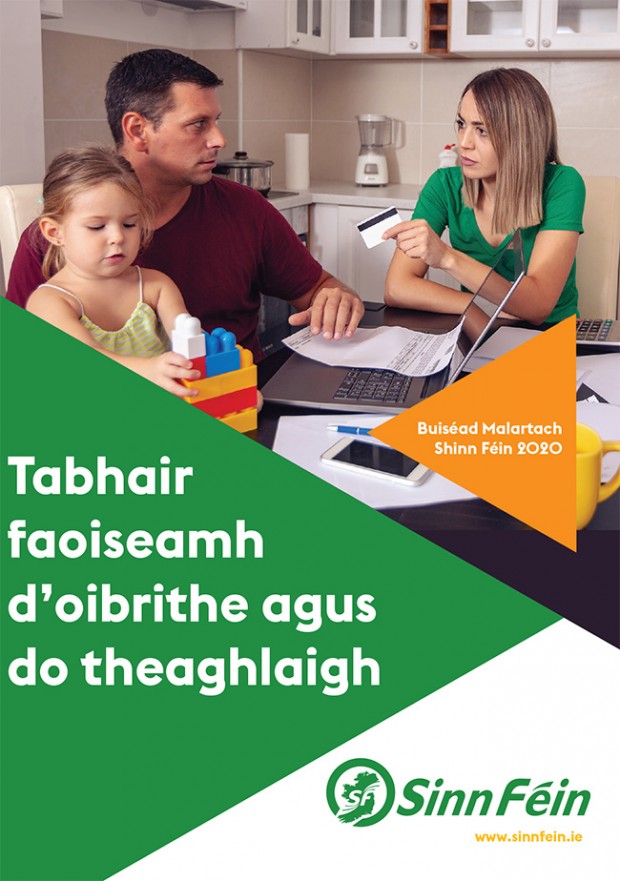 ‘Not in the interests of the country’ was the reason Leo Varadkar gave for not calling an early election in late October. It is a compelling standard for judging the coalition government held in power for more than three years by a benevolent Fianna Fáil party and independents who are also hesitant in putting themselves before the people.

There are a range of examples of lapsed standards by this coalition government. They range from the failure to effectively tackle the housing and health crises, or the inability to halt vulture fund sell offs by the financial institutions bailed out by the taxes levied on Irish citizens. When you add in the rising homeless figures, the cost overruns across government projects, including the new National Children’s Hospital, you have a clearer picture of the real national interests not being met by Fine Gael in power.

Varadkar’s government failures in recent months were compounded by Paschal Donohue’s budget. It should have given workers and families a break. It didn’t. With political will and the right ideas, this budget could have put money back in people’s pockets and improved their access to public services.

It could have begun to broaden our horizons, making sure that work pays and delivers security and the chance to plan for the future. It could have begun to build a fair tax system, making sure that those who benefit most from our economy pay their fair share – the banks, multinationals and international property investors who have enjoyed a free ride for far too long.

The budget failed to deliver on these modest demands. It was a budget short on ideas, policies and solutions. Fine Gael’s budget lacked ambition, direction, and most importantly, it lacked hope. 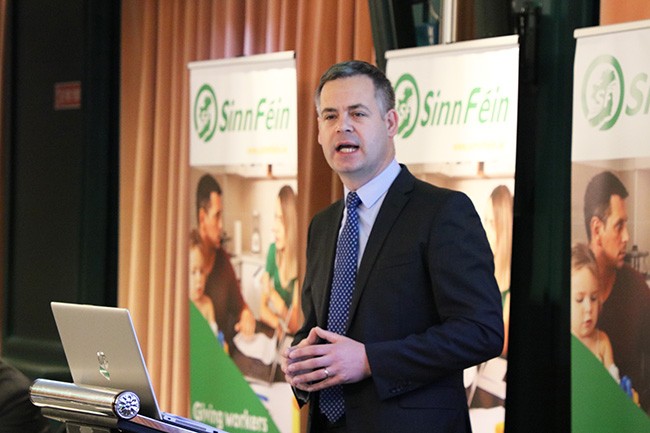 Sinn Féin would have tackled the rip-off costs faced by countless families – sky-high insurance premiums, extortionate rents, eye-watering childcare and back to school costs. Citizens continue to pay rather than the bankers, the insurance companies, and the vested interests that this Government and their partners in Fianna Fáil have never and will never stand up to.

Since the economic crash a decade ago, the Irish people have carried the weight of a recovery that has been enjoyed by some, but not by all. This Government has failed to turn a growing economy into real returns for those who have built it and for those it should serve. The banks, multinationals and international property investors have enjoyed a free ride for far too long.

This government have introduced child homelessness as a permanent feature of our society. They have laid out the red carpet to cuckoo funds and speculators that have bought up our cities, pushed up prices and left young people and families locked out of the property market and locked in to an unaffordable rental system.

In 2016 Fine Gael promised to abolish the Universal Social Charge. A promise they have broken. Last year the Taoiseach promised to deliver a 2.3 billion euro tax cut for workers paying the higher rate in every Budget over the next five years. The budget broke this promise. 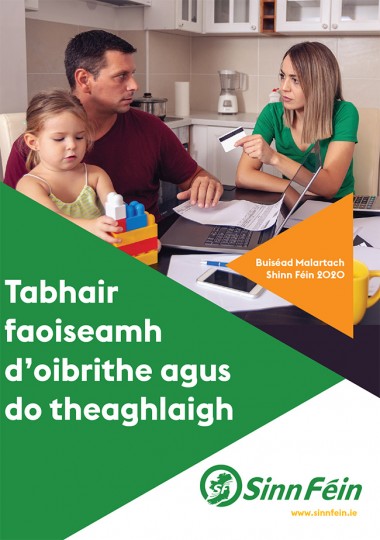 Fine Gael has made wasting taxpayers’ money official Government policy. We have a National Broadband Plan that will see taxpayers subsidize a private consortium to the tune of 3 billion euros, for infrastructure that the State will never own.

We have a National Children’s Hospital that has seen costs escalate by more than €450 million. We have found out in October that the Department of Health requires a €350 million bailout next month just to break even.

Brexit was always going to have an impact on this Budget. But it shouldn’t be used as an excuse for failure. Out-patient waiting lists are at their highest since records began, with over 569,000 patients waiting for a hospital appointment. That was not caused by Brexit. Over 10,000 citizens are homeless and average rents have increased by 20% since Varadkar took office. That wasn’t caused by Brexit.

This budget could have given workers and families a break had the right choices been made.

It is a decade since taxpayers bailed out the banks to the tune of €67 billion. The Government pumped billions into AIB, Bank of Ireland, Permanent TSB, Anglo and Irish Nationwide.
It was done at great social and financial cost. That bill stands at €42 billion.

The Government refused to tackle the inequality in our society and to ensure that those most able to shoulder the burden pay their fair share - the banks, international investors and super rich. Instead the Government have chosen to distil their entire climate action plan into a regressive tax on households. The increase in carbon tax is no panacea to the climate crisis. It is a box ticking exercise.

Sinn Féin have shown how revenue can be raised through progressive taxation, closing loopholes and making sure that those who can pay do pay their fair share. We have once again put forward effective, radical and realistic alternatives.

Fine Gael and Fianna Fáil’s answer to the climate crisis is a tax that will hit low-income households and the most vulnerable in our society hardest, without offering alternatives or adequate respite.

The social welfare package announced by government is less than one third of the size of the package proposed by Sinn Féin. The Fine Gael measures fail to give families, lone parents, carers and people with disabilities the break they badly need.

In our alternative budget Sinn Féin advocated a €5 increase to all weekly rates and €9 on disability payments, in order to begin to recognise the additional costs to which disability gives rise.

Every day our attention is drawn to housing. Renters handing a third of their pay packet to their landlord. Families and couples struggling to find a home they can afford. Homeless figures reaching more disturbing levels. Rents that continue to rise with no sign of letting up.

Over 10,000 people were recorded homeless at the end of August for the seventh month in a row, nearly 4,000 of them children. The number of child homeless has increased by 365 percent during five years of economic growth. 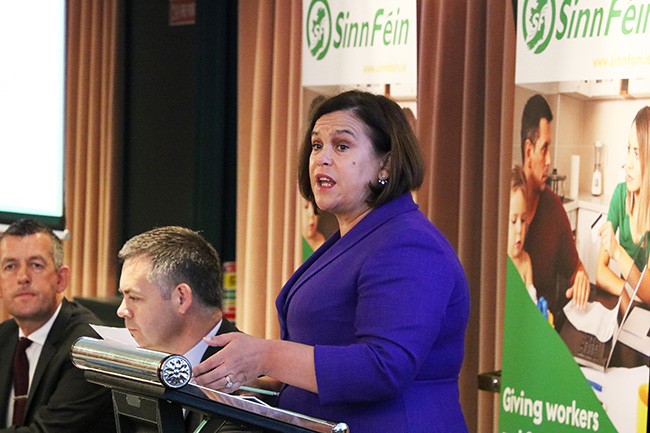 The budget had no additional targets for social housing, with build and acquisition targets unchanged. And no affordable homes to be delivered in 2020. Sinn Féin have a vision for housing that has at its centre the right to a home. It is a vision backed up by solutions. These include holding a referendum to enshrine the right to housing in our constitution.

Sinn Féin would introduce an emergency three-year rent freeze and provide a refundable tax credit worth one month’s rent for all renters not in receipt of HAP or RAS. This measure alone would put one month’s rent back in tenants’ pockets next year, giving them a break and the breathing space to save and plan for the future.

This Government has built homes at a glacial pace, with a Rebuilding Ireland Programme that has failed on all counts. Sinn Féin have provided for large scale investment in public housing in our alternative proposals. We would double capital investment in public housing, increasing the output of social and affordable homes in 2020, delivering an additional 8,700 housing units.

They are the values we must abide by; stepping up and providing where there are failings, rectifying wrongs where they’ve been made and taking charge where the State has abdicated its responsibility. Fine Gael has failed to deliver on these values. Sinn Féin will continue to lead the way. The full Sinn Féin budget proposals can be found at the www.sinnféin.ie website.

Pearse Doherty is a Sinn Féin TD for Donegal and the party spokesperson on Finance, Public Expenditure and Reform