The Battle of the Bogside 40 years on - was it worth it? 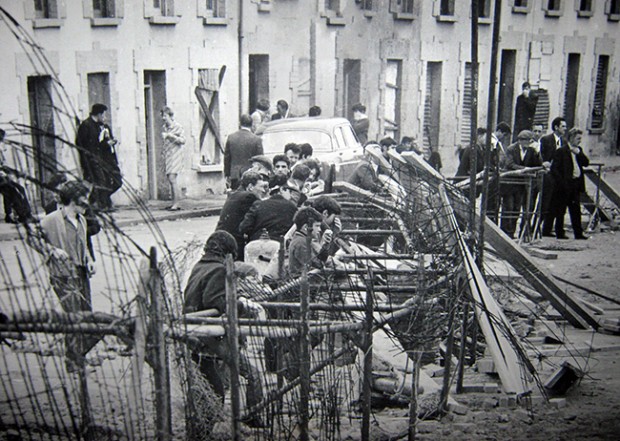 Mitchel McLaughlin, a Derry youth in 1969, who progressed on to be a Sinn Fein MLA, National Chairperson of the party, the first Sinn Fein Speaker of the Assembly and this year’s Le Chéile honoree recalled the events of August 1969 in his native city for An Phoblacht in 2009. Today we reprint Mitchel’s article. Also see – The battle which seceded the Bogside from British Rule, by Callum Smyth.

In the late 1960's, Civil Rights struggles in the US, and student protests in France, Germany and England, especially the anti-Vietnam war protests, had evoked a demand for reform and social justice in Ireland but particularly in the North.  The Civil Rights movement was formed in the mid-1960s and sought to achieve reform by publicising, documenting, and protesting for an end to abuses in areas such as housing, gerrymandering, discrimination in employment and the Special Powers Act.

The Derry Housing Action Committee had identified a popular cause and a capacity for direct action which had very quickly produced a number of relatively minor but symbolically important victories. The lesson that further pressure might produce other much needed change was not lost on nationalists. Unionists believed that more reform would eventually lead to a United Ireland and were instinctively opposed to the very concept of equality. In hindsight, this may perhaps offer the best rationale for the conflict that was about to engulf the North. 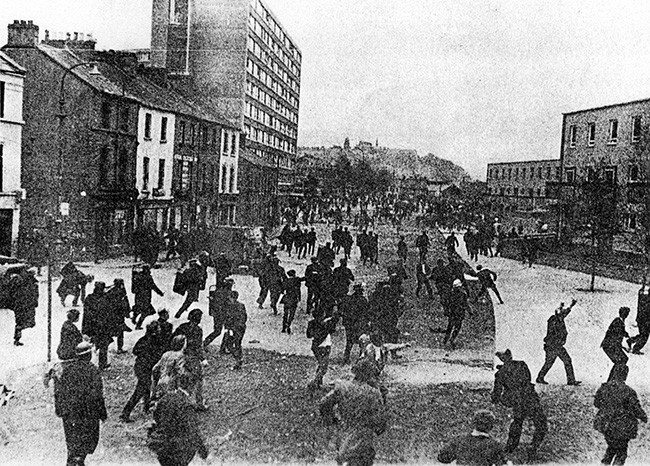 • RUC and loyalists mob attempted to enter the Bogside 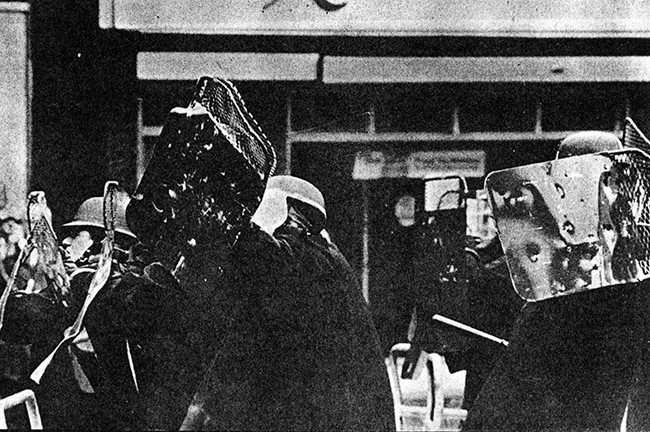 In August 1969, the political context for the controversy about the Apprentice Boys march was anger over the blatantly sectarian decision in 1965 to locate the new University in Coleraine instead of Derry, the housing agitation and direct action of the DHAC, the Duke Street Civil Rights march, October 5th 1968, the Burntollet ambush of the Peoples Democracy march, January 1969, the subsequent invasion by the RUC of the St. Columbs Well's area of the Bogside and in particular, the deaths of Francis McCloskey, from Dungiven, 14th July 1969 and Sammy Devenny 16th July 1969 who were the first fatalities of the 'Troubles', batoned and beaten by the RUC.

An interesting feature of Derry in August 1969 was the number of organisations or personalities who joslted for the leadership from time to time or indeed from protest to protest.  What was equally interesting was the unionist insistence that all of these various leaderships were only a front for republicans.

Whilst a working accommodation would often prevail, the reality was that no single group or leadership could claim to exercise an overall authority. Despite the debates and disagreements about tactics and objectives, a consensus of sorts would often emerge especially during what is now known as the Battle of the Bogside. In reality the nationalist community had rejected the state and the RUC and it seemed that most front and back doors were left unlocked if shelter or food were needed and this became a dependable feature during riots or 'snatch' operations for a number of years thereafter. 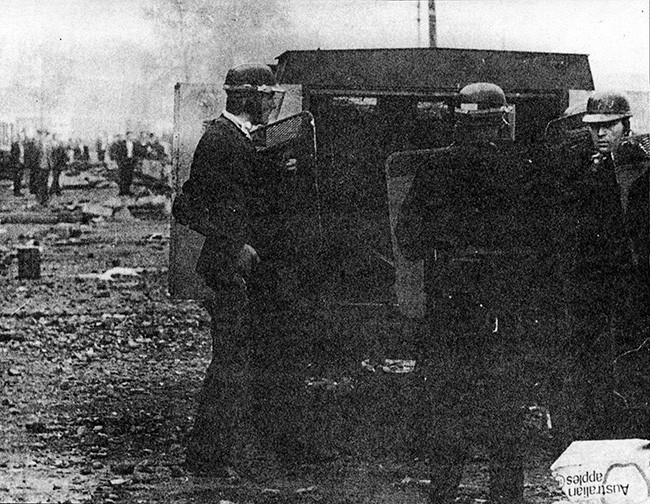 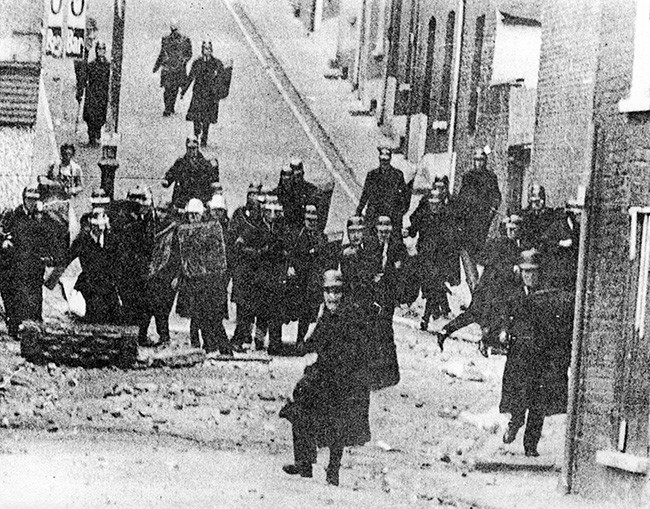 The Battle of the Bogside will of course be remembered in popular memory for the first use of CS Gas by the RUC and the trigger for the redeployment of the British Army on the streets of the Six Counties. As the Apprentice Boys parade passed close to the Bogside area the predicted rioting erupted.  The RUC used armoured cars and water cannons to drive the rioters back and initially attempted to enter the Bogside.  The RUC were closely followed by a loyalist mob.

The Bogsiders eventually succeeded in forcing the police and the loyalists out of the area.  It was a mighty riot alright, and without doubt after more than 50 hours of fierce combat, the RUC were exhausted and on the verge of defeat. But it was the fact that the Unionist Government was losing control of the situation, especially as more nationalist areas rose in support of Derry, which impelled the British Government to send in the British Army. 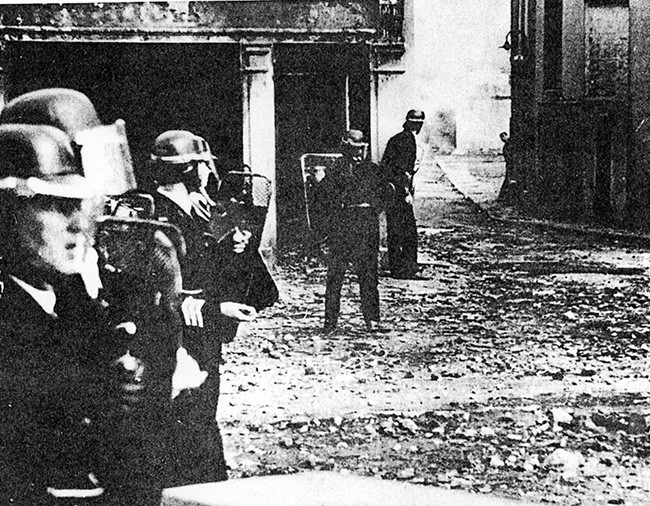 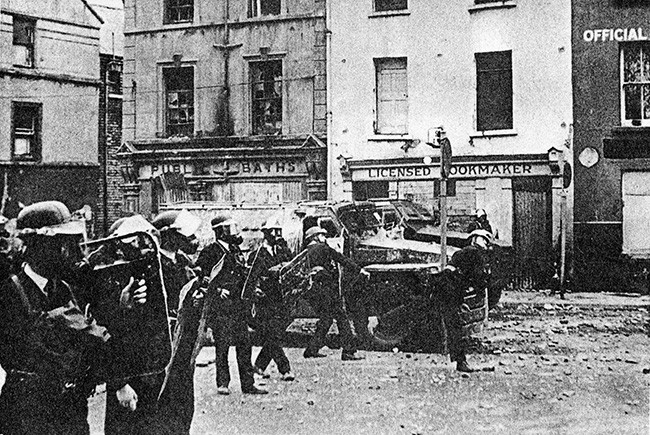 It was only later that I became aware of the price that Belfast and other areas had paid, indeed would continue to pay in the days that followed.  At the height of the Derry riots, appeals had been made for other areas to come out and to draw the RUC away from Derry. Calls had also been issued by various spokespersons for the Irish Government or the British Government to act.  Jack Lynch made a television address announcing that 'field hospitals' would be set up in border areas.  He went on to say: "The present situation is the inevitable outcome of the policies pursued for decades by successive Stormont governments.  It is clear also that the Irish government can no longer stand by and see innocent people injured and perhaps worse."

It should be remembered that in Derry, despite the intensity of the riot with more than 1,000 casualties and notwithstanding that some RUC officers had used live rounds; no-one had been killed. But in Armagh a local man, John Gallagher was shot dead by the B-Specials during a protest. He was the first fatality of August 1969 but in the following two days another seven people would die.

In Belfast, after nationalist protests about the RUC actions in Derry, vicious sectarian riots erupted and continued throughout the following day. In Divis Street the RUC fired a number of shots from a heavy Browning machine-gun mounted on an armoured car into the Divis Flats and Towers killing a nine-year-old Catholic boy, Patrick Rooney as he lay in bed

The next day, 15th August, six more people were killed and countless more injured during escalating sectarian pogroms against Catholics in Belfast. Despite the heroic efforts of a small band of IRA volunteers, many families were burned out or forced to move from their homes. 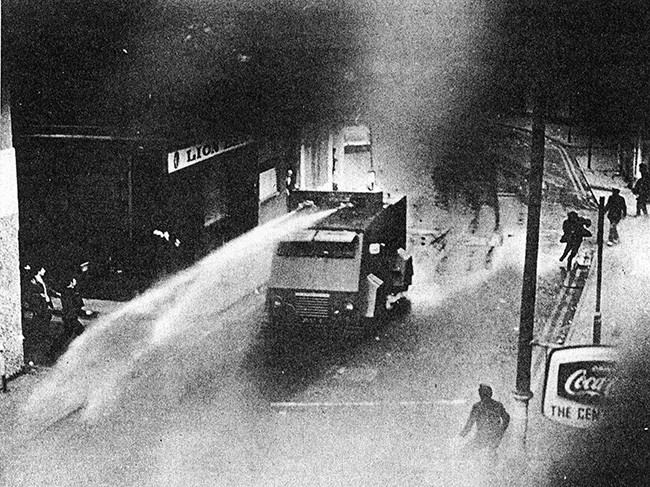 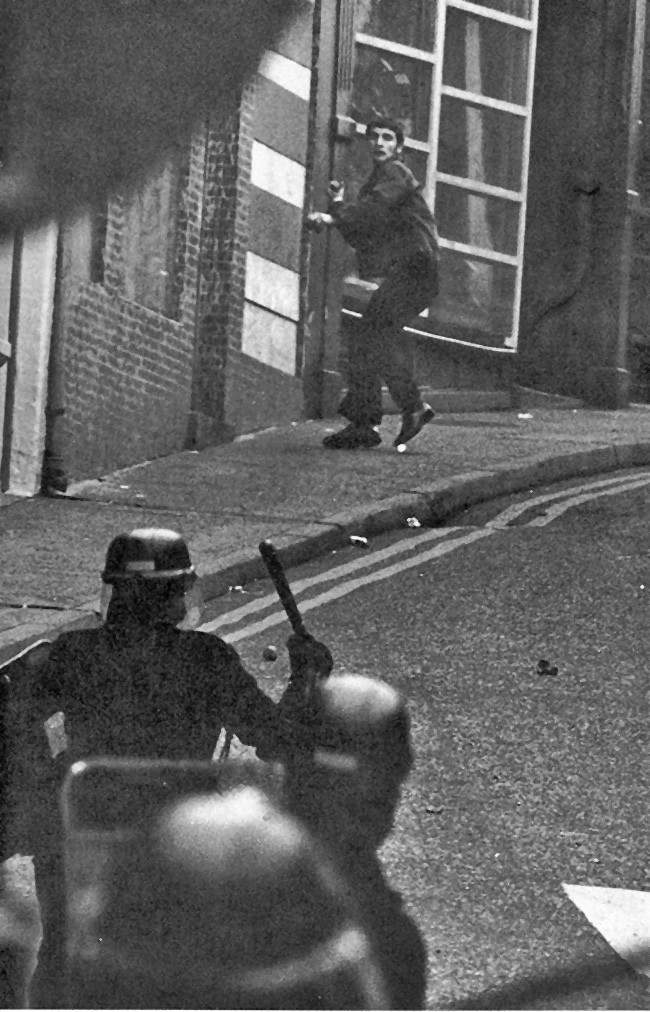 I have often listened in Derry to discussions, conversations and reminiscences about the 'Battle of the Bogside' and wondered if we have a certain parochial smugness about our part in defeating the RUC on that occasion. But is that a perspective that too often understates that other areas and most especially Belfast had come out in support with the certain knowledge that a massive backlash would follow? A question arises: 'Is it not long past time when Derry should formally acknowledge the courage and sacrifice of those areas which came out in support of the Bogside?'

In typical republican fashion I will approach that question by asking another. Did the conditions for social, political and economic justice exist in the North of Ireland in 1969? (I could well ask that as an All- Ireland question but we are discussing the 'Battle of the Bogside').  I have already referred to the reasons for the emergence of the Civil Rights struggle and indeed Unionist resistance to those demands. It might be beneficial to remember the Civil Rights demands, making due allowance for the language of that time:

Discrimination in employment and housing, gerrymandering, the denial of access to political power meant that for the vast majority of the nationalist community, the conditions for change did not exist and would continue to be denied by state violence.

But as Ian Paisley recently remarked "that was then, this is now". 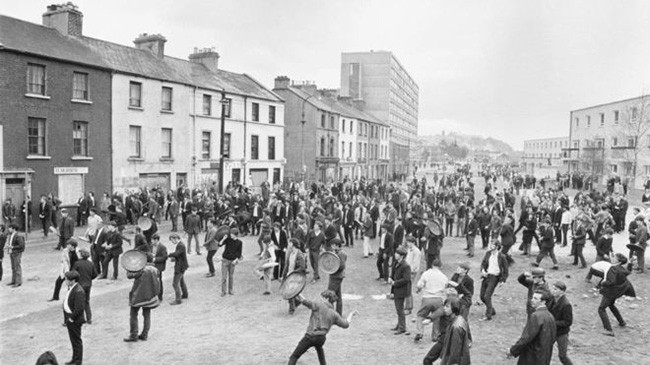 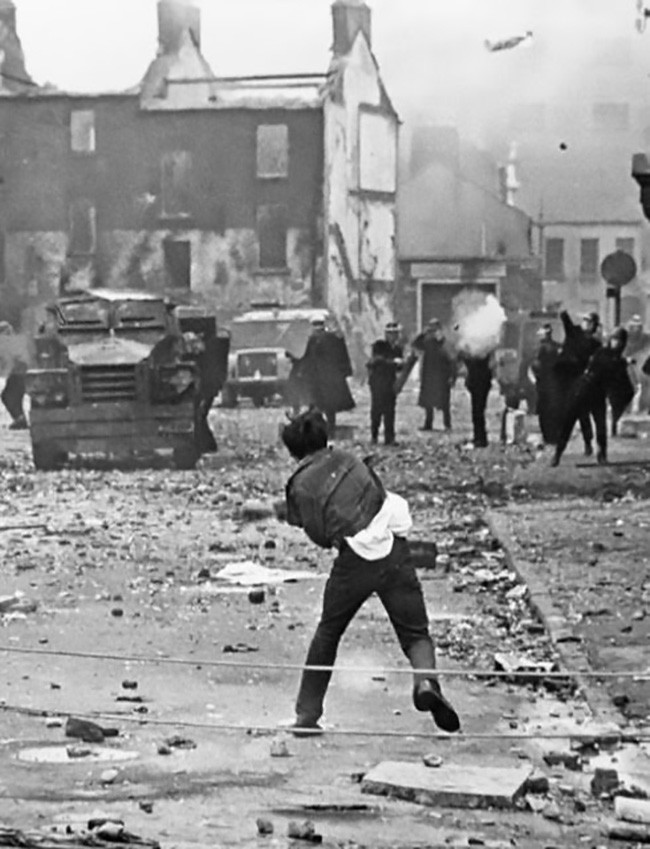 Most people in Ireland have accepted that massive reforms have now been won and indeed are guaranteed by an international agreement which was ratified by the people of Ireland.  The Good Friday Agreement made historic strides towards redressing injustices by ensuring;

• Power-sharing as of right

• No return to Unionist domination

• Equal rights enforceable by the courts

• Reform of the judiciary and the justice system ongoing

• Formula within the Good Friday Agreemen to address the issue of Partition.

Republicans, after many years of struggle have now created the basis for peaceful and democratic means to pursue our goal of national self-determination.  No one can seriously deny that these changes have been delivered and that the Orange state of 1969 no longer exists.

To come back to the original question - "Was it worth it?"

'Yes!' is the answer, always being conscious that the longest journey begins with the first step and we still have a lot of work to do to complete the journey.