Brexit has internationalised the issue of partition 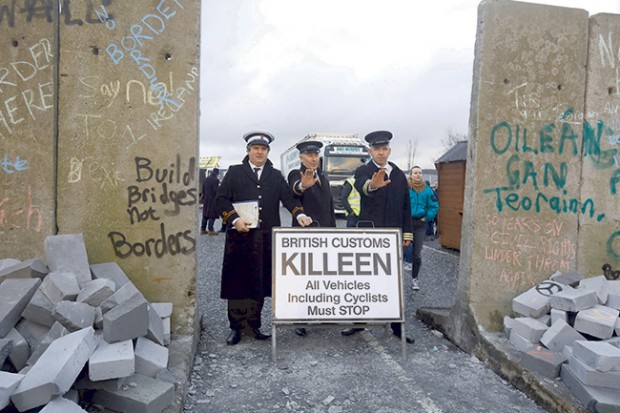 Governments in Dublin have always been keen to downplay the issue of the border for fear that it might put the whole notion of partition in question. The immediate aftermath of the Brexit referendum was no exception. For all the spin about what a fantastic job has been done by the government in Dublin, we shouldn’t forget that at the European Council meeting immediately following the referendum the then Taoiseach spoke about the situation of Scotland.

Enda Kenny didn’t use the opportunity to place the issue of the border in Ireland centre-stage. Subsequent government actions, such as seeking locations for customs posts, indicate the very limited approach that they had with regard to the Brexit negotiations, as well as a fundamental misreading of the mood in border communities.

The Irish government have always tended to downplay the importance of the Good Friday Agreement. They tended to accept the London government narrative that the Agreement was a one-off event in a particular time and place - the end of a conflict rather than the beginning of a process. They ignored the fact that the GFA is a dynamic document that underpins a political process towards increasing north-south cooperation and eventual Irish unity.

The London/Dublin consensus on this issue made it difficult throughout the years to internationalise the issue of the border. In general the EU is reluctant to challenge the governments sitting around the table about issues considered to be their “internal” affairs. And when the two governments most directly affected signal their acceptance of the status quo then they remain silent.

When the British people voted to leave the EU, the mood within the EU changed. The European Parliament, often overlooked by commentators, insisted that the negotiating mandate of the EU was to uphold the Good Friday Agreement in all its parts. This was a significant victory for the Sinn Féin team in the European Parliament, and in particular Martina Anderson as negotiator for the GUE/NGL Group.

The EU - and in particular the European Parliament - took this seriously and started to look at the reality of north-south cooperation, the need for the north to remain in the customs union and single market, the implications for rights and the situation of Irish citizens in the north of Ireland.

The outworking of this was the Joint Report agreed by British and EU negotiators on 8 December 2017, a report that the DUP tried to sabotage. It did not contain the “special status” that Sinn Féin had been seeking, but was clearly based on a similar analysis of how to square the Good Friday Agreement with EU Treaties. This position has been somewhat watered down in the negotiations on the legal text of the Withdrawal Agreement, but the key provisions to avoid border infrastructure in Ireland remains clearly in place in the form of the backstop.

The one provision of the GFA that EU officials and politicians have been reluctant to speak about publicly is that of the provision for a border poll. They don’t want to be seen as being “antagonistic” to the British government, echoing the “not the right time” line of the Dublin government. The priority remains getting a Withdrawal Agreement which protects the essential interests of the EU, including the backstop. The preference of the EU is for a backstop specific to the north of Ireland, but they have reluctantly accepted the British government proposal to extend it to Britain.

Informal discussions about Brexit in Brussels invariably turn to the issue of the border in Ireland. It’s a rare discussion in which somebody, and sometimes the most surprising people, doesn’t observe that things would be so much easier if there was no border. Brexit has internationalised the issue of partition.

Regardless of how the Brexit saga plays out over the coming days, weeks and months, the issue of Irish unity is in the Brussels air. If the Withdrawal Agreement is accepted in Westminster, unity is still the only long-term solution compatible with the GFA and with EU Treaties.

If there is no Withdrawal Agreement then physical infrastructure on the border is not an option. It would risk a remilitarisation of the border.

Some have spoken of “moving controls away from the border”. To where? To the sea between Ireland and the rest of the EU? This would amount to removing Ireland from the Single Market and punishing Ireland for a mess created by Britain.

Again, the only way forward which would be compatible with the Good Friday Agreement and with EU Treaties is Irish unity. This is increasingly recognised in EU circles. The discussion has begun on the EU level. And when the current phase of Brexit plays itself out that discussion will only get louder.