Now what was the question?

Apart from the, ‘if there was an election tomorrow, which of the following parties would you vote for’, the most enduring opinion poll question in Irish politics is about support for a United Ireland. Yet, despite being a survey question in various forms for over 50 years, we still have yet another Irish and British Government unwilling to put the question to voters on this island.

Instead, much of the news media, political commentators and an endless parade of Taoisigh and cabinet ministers have over the years danced their way around the ‘not yet, ‘not the right time’, ‘not the right question’, and on and on.

For a political issue whose time has not yet come, there is an insatiable news media willing to put the question to voters in opinion poll surveys as a flawed platform for discussion of partition and the need for a united Ireland. The platform is flawed because no matter what the opinion poll result is, many news media voices and opinion writers are firmly in the ‘not yet’ camp and this biases their reporting.

Since the constitution was ratified by a referendum in 1937, 26-County voters have had a total of 48 referenda, 37 of which have resulted in constitutional change, eight of these referenda were on the European Union. Yet we still don’t have time for a border poll. Two of the EU-related votes were reruns, which puts the lie to one of the reasons for not having a border poll that there might be a ‘wrong result’. Governments can rerun referendums when there is a political will to do so.

There have been two referenda on divorce in Ireland and there will be a third in May on the length of time separated couples have to wait to divorce. The state’s position on abortion has been put to six separate constitutional amendments since 1983. So we can as a society have long ongoing national discussions on an issue, and test this through referenda.

We should though recognise the downside of referendum debates. This includes the distorted nature of the 2014 Scottish independence referendum and the cycle of lies and untruths surrounding the 2016 Brexit referendum. In both cases the media coverage and fairness of the conditions that the referendum debates were held was questionable. But so far in Ireland there has been a better political environment when it comes to referendum campaigns. This is partially as a result of the 1995 McKenna judgment, which prevents governments from using public money in a referendum campaign. 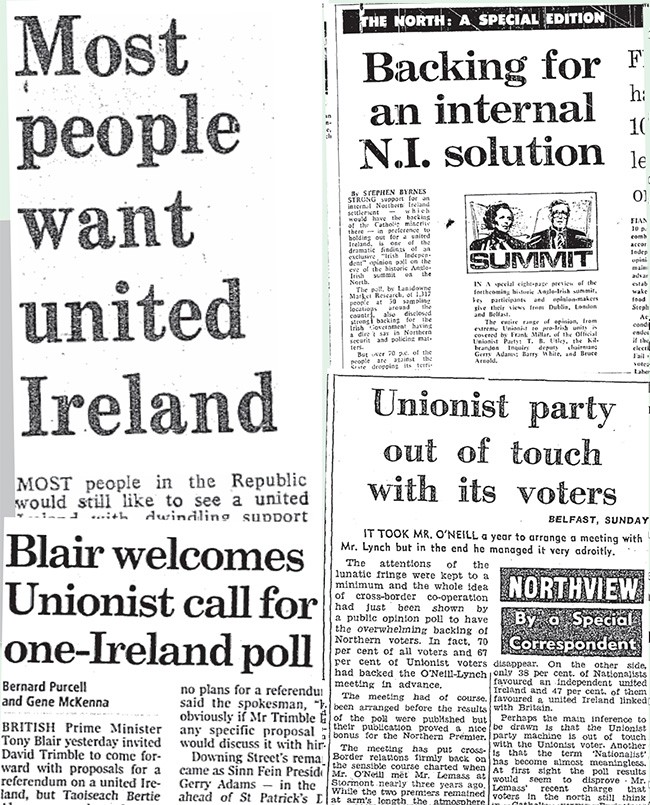 With no border poll referendum in sight there is still a supply of news editors determined to put the question. For some reason the establishment media and the opinion poll companies they hire to survey voters often either cannot ask the question directly or have to caution the answer with caveats that seek to reinterpret what is an ongoing desire for significant change in the island’s political structures.

The most recent entrant here was the Irish Times in March. Ipsos MRBI polled voters on both sides of the border. Their result showed 32% of northern voters in support of “unity with the republic”, 45 % against. In the 26 Counties, 62% of those polled in favour of “unity with Northern Ireland”.

An interesting result, but what would be more enlightening would have been a series of questions on how politics on the island of Ireland could transition from the two flawed states model it is currently locked in onto something that would have widespread enduring support. Colin Harvey teases out some of these issues in his article in this edition of the magazine

A Deltapoll survey conducted in September 2018 found that 52% of voters would favour a United Ireland post Brexit, with 39% wanting Britain to remain part of Britain. A RED C Paddy Power Poll in September 2018 of 26-County voters found that 61% would like to see Irish Unification out of the Brexit negotiations. A similar 2016 poll by RED C for Paddy Power found that two thirds of voters would back a United Ireland if a border poll was held.

A RED C poll for the Sunday Business Post in February of this year found that 43% of voters believe that Brexit makes a United Ireland more likely, with 45% disagreeing with this proposition. It comes down repeatedly to the question put, and this is why a border poll is needed. There clearly is sizable amount of voters throughout the island who have strong opinions on partition, but the government refuses to engage and the media recycle the poll questions without the necessary consistency on asking questions that can stimulate relevant debate.

In the weeks before the Anglo Irish Agreement was signed on November 15th 1985, the Irish Independent published a Lansdowne poll. The survey had been conducted over a month, between October 3rd and November 3rd. One question asked was on the “only way to solve the Northern Ireland problem”. Respondents were give the options of a “united Ireland only way”, “don’t know” or “other options could work as well or better”. 57% of respondents took the ‘other options choice’, 12% don’t know and 31% took the united Ireland ‘only way’ choice.

Compare this to the same paper’ front page on June 1984, “United Ireland backed by 75%”. This poll was conducted by British company MORI, who asked 26-County voters their opinions on a simple yes or no to a united Ireland. 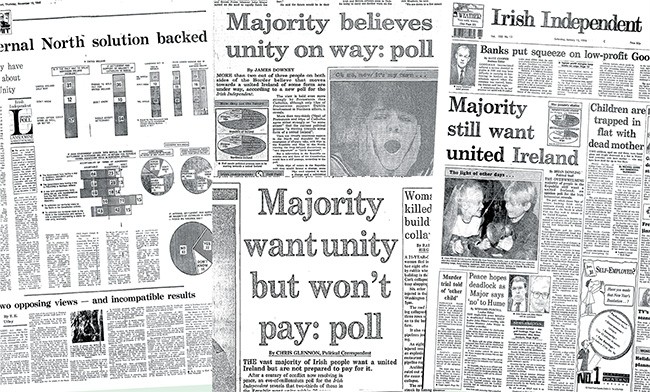 In November 1980, another Irish Independent headline proclaimed, “Most people want a United Ireland”. The paper was reporting on a poll commissioned by RTE. It found that 56% “favour a united Ireland as the best long-term solution”. The other options were, “supporting an independent Northern Ireland” (13%) or a power sharing assembly (9%), a joint Dublin London administration (10%), or direct rule (3%).

In April 1991, an MRBI survey reported on the front page of the Irish Independent found that 82% of 26-County respondents ‘favoured the ideal of a United Ireland’. But more on this later.

“Majority still want United Ireland” was an Irish Independent front page headline in January 1994. The article reports on two surveys, one conducted for the Independent and the second for UTVs Counterpoint programme found that in the North, 61% wanted to ‘stay in the UK’, 25% want to ‘join a United Ireland’.

“Majority want unity but won’t pay” was an Irish Independent front page poll in December 1999. 86% of those polled wanted to see unity “at some stage”. In 2003, a Belfast Telegraph poll conducted by Millward Brown found that 26% of those polled supported a United Ireland. 61% wanted to maintain the link with Britain.

An example of the Irish Times approach is shown in a 1987 MRBI poll. Here the question put was about “expectations of unity”. Two thirds of voters had an “aspiration” of Irish unity, compared with 75% of voters when a similar question had been asked four years previously. This “aspiration to unity” had risen to 82% when a similar poll was conducted again in 1991.

This 1991 poll prompted then Sinn Féin president Gerry Adams to write to the Irish Times, regarding a question which asked those surveyed would they put off unity if the then Brooke talks on an internal settlement progressed. This was “a play on emotions” according to Adams, who wrote that, “that there was an obvious natural desire on the part of many people for peace In Ireland. What it is not is a blank cheque for Dublin and the SDLP to concede the Irish people’s right to independence and unity”.

The need to let the Irish people decide on a border poll is a necessity. The need for a fair conditions for how that poll is debated and discussed in the media and the public sphere is an imperative.