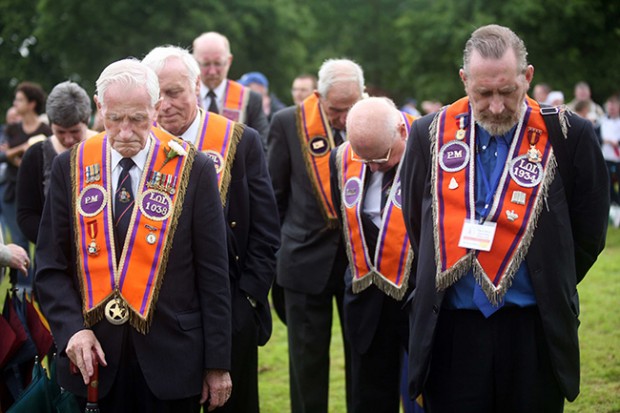 • Protestant/Unionist/Loyalist communities are feeling the winds of change

Let us be clear from the beginning.

I was brought up on Belfast’s Shankill Road throughout the worst of the troubles. My cultural and political reference points – neither monarchist nor Loyalist – draw from the Labour movement and British working-class values.

However, be in no doubt. I am an Irishman. And I defy any nationalist or Republican to tell me otherwise.

For mine is a Dissenter creed. That of Henry Joy McCracken and James Orr. And whilst like them, I harbour an aspiration for an agreed 32-county unitary state, I do not envisage the DUP or Sinn Féin as the likely midwives to such a happy event.

To be sure, something is moribund in the body politic of the United Kingdom.

The Union is terminally ill.

Yes, there may yet be periods of remission. Even some good days when self-delusion wins out over existential inevitability.

But undeniably, Brexit and Scottish, English and Irish Nationalism are all eating away at the very fabric of the Act of Union itself.

We live in very different times from previous 20th century certainties and everything from portentous national and international events to unremitting demographic change, have ensured that Irish history marches relentlessly on.

Those who feel the winds of change most of course are the Protestant/Unionist/Loyalist communities of Northern Ireland. For more than any other community within the union, they have (or perceive that they have) most to lose.

This community have been at war to protect and preserve their constitutional and cultural status. A community who feel that the very ground beneath their feet is coveted by many of their fellow citizens who walk amongst them. And by another jurisdiction to the south, where senior politicians speak publicly of aspiration, inevitability and the fielding of candidates in their elections. Where the Brexit vote has rendered the nationalist community in Northern Ireland for many, a sort of Europhile 5th column, asserting again that England’s misfortune is Ireland’s opportunity.

It is an axiom that democratically elected structures have failed both of these communities. Shared civic values and a common desire for stable, effective, devolved government have fallen foul of questionable ethics, conservative social mores and a relentless pre-occupation with identity politics and partition. Whilst internationally, shibboleths and previous certainties come under review and revision, the immovable object of unionist intractability continues to be vexed by the irresistible force of aspirant nationalism. 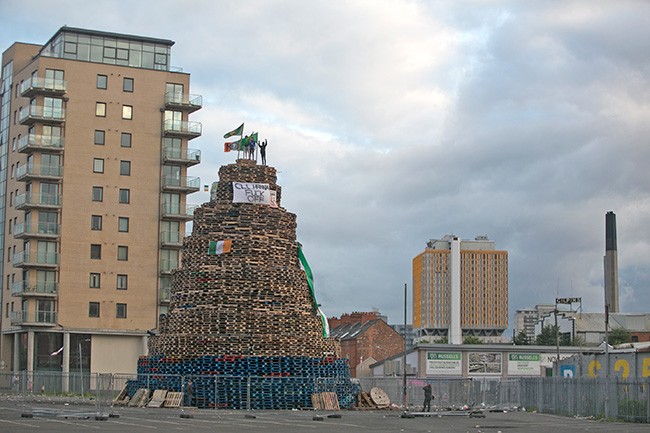 We live in an age where identity politics have increasingly come to influence – even define perhaps – affairs of state, nationally and internationally.

Remainers and Brexiteers; The Alt-Right and Antifa; The ‘Me-Too’ movement; The LGBT movement; ‘Black Lives Matter’; Everywhere it seems, we see struggle between the socially liberal and the socially conservative.

It would appear that western societies are more divided now than they have been in decades. There is growing extremism at both ends of the political spectrum. Politics, it seems, is no longer about what you think… but who you are.

This lining up of identities dramatically changes the democratic stakes: previously if your political party lost, other parts of your identity were not threatened, but today losing is also often a blow to your racial, religious, regional and ideological sense of self.

Once the other party becomes an enemy rather than an opponent, winning becomes more important than the common good and compromise becomes an anathema. Such situations also promote emotional rather than rational evaluations of policies and evidence.

Making matters worse, social scientists consistently find that the most committed partisans – those who are the angriest and have the most negative feelings towards out-groups – are also the most politically engaged.

This inclination for groups of specific religion, race, gender or ethnicity to mobilise politically in order to advance a specific set of  interests or goals – without due deference or regard to wider societal concerns – is not something new to Northern Ireland of course.

In most facets of political and civil society, Northern Ireland is still dogged by recourse to identity politics and segregated communal identification.

In that virtually unique manner in which Northern Irish politics can reduce the most complex and nuanced issues to a simple binary sectarian electoral outcome, both communities there find themselves signed up to the respective Brexit positions of the DUP and Sinn Féin. If dissent does occur within the virtually ‘Balkanised’ system of Northern Ireland, there exists no viable alternative political vehicle by which to mobilise or express it.

All this of course, feeds into the wider debate fuelling the so-called ‘culture wars’ being fought for hearts, minds and the collective psyche, in establishing an acceptable post-conflict narrative. Not only for the citizens of Northern Ireland it seems, but also for interested parties from further afield, who have invested heavily in a peace process that can be used as an exemplar by others.

Faced with this scenario, the political representatives of Ulster Unionism have shown little or no capacity for adroit or imaginative responses to the unfolding dilemma. Rather, the duopoly of power sharing that passes for (sometime) governance in Northern Ireland continues to lock them into a ‘no surrender’ mind-set that is simply no longer fit for purpose.

It may now be necessary to admit that until the ‘national question’ is adequately resolved, no durable and lasting solution to governance in the region is possible. We can no longer put the ‘cart before the horse’ so to speak. Former DUP Leader, Peter Robinson has acknowledged as much. 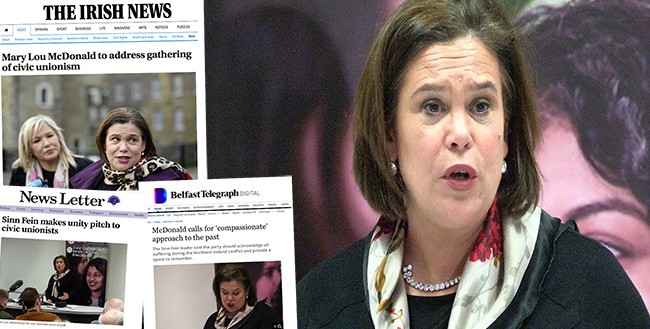 But how to begin to do this?

In short, nothing less than a bold ‘reimagining’ of the national question is required.

In the first instance, both communities (and political parties) in Northern Ireland should be encouraged to reflect upon the changing nature of their relationships with their respective ‘Motherlands’.

Ulster Unionists have for some time feared that British citizens generally (and the metropolitan elite in particular) show a practiced indifference to their status. Furthermore, whilst the DUP may briefly enjoy a position of influence with the British Government, they should be in no doubt that the Tory party, civil service mandarins and a considerable number of the British public, are holding their noses whilst doing business with them.

Similarly, Northern Nationalists surely (if begrudgingly) must now accept that their ‘Irishness’ is viewed in somewhat different terms to/by those citizens residing in Munster, Connaught and Leinster.

Archaic appeals to outdated notions of exclusive affinity with both British and Irish states, needs to be re-cast in terms of a common, shared agency, dictated by the uniquely historical, cultural and socio-political factors pertaining to those who live within the state of Northern Ireland.

One that adequately accommodates the complex and unique identity forged by Irish, British and regional/provincial associations. And whilst it has been the tradition of liberal left thinkers to assert that this must begin with the Protestant/Unionist/ Loyalist community loosening their grip on the Union, the real challenge to resolving the national question in perpetuity, lies with the Catholic / Nationalist/Republican communities in Ireland, North and South.

Until recently, the attitude of respective British and Irish governments has been to consign the Irish border question to the middle or distant future, remembering no doubt, the horrors of the near past and concerned that any such re-emerging narrative would risk dangerous destabilisation.

Calls for an Irish border poll on the national question further risk reinforcing both division and democratic frustrations, by again reducing a complex and multi-faceted conundrum to a simple ‘Yes/No’ designation. (Have we learned nothing from David Cameron’s folly?)

Similarly, proponents of the ‘demographic inevitability theory’ which reduces the question of national sovereignty to a sectarian head-count, make unfounded presumptions on the preference that the nationalist community will express when (eventually) in a majority.

It is an oft-stated maxim in the Republic of Ireland – spoken from bar room to boardroom – that ironically, the biggest impediment to Irish unity, is in fact… Sinn Féin themselves.

Sectarian infused interpretations and ownership of the concept of ‘Irishness’ – where the term is given to be synonymous with ‘Catholic, nationalist, Republican’ – has done much to alienate Irish (and British) Protestants (who otherwise might be encouraged to find common cause with shared affiliations).

Therefore, central to the premise of nurturing political courage and creativity, is the rejection of the perceived dichotomy of the designations, ‘British’ and ‘Irish’. That is to say, that the two are not mutually exclusive and – in keeping with the tenets of the Good Friday Agreement – duel / joint nationality should be the accepted status of all citizens in the Province. However, perhaps a third designation – that of Northern Irish – could usefully sit alongside these fixed affiliations and be actively promoted by legislators in all civic arenas.

Writing over 45 years ago, Michael Sweetman stated plainly, what was required.

“We [in the Republic] have got to go back to 1912 and relinquish a great deal of what has happened since, in order that both parts of the country can make a new start.

He cited, “…consistent attempts to impose a narrow concept of Irishness, involving the primacy of Gaelic culture, the rejection of British strands in Irish traditions, and a particular view of history which made a virtue of fighting against Britain and a vice of defending British rule”.

We are now in a new, pending – Brexit dispensation. One that has disorientated unionists (despite their bluster) and undermined the very Union itself. Furthermore, the prospect of a far left labour party in power – with traditional ties to Sinn Féin- certainly focuses the mind.

There have previously been periods when Unionism has been presented with opportunities to ‘recalibrate’ their locus on the island of Ireland, largely on their own terms and from an advantageous position of strength.

Now is another such opportunity.

History may yet judge that their interests were more threatened by the UK’s determination to do a deal with Sinn Féin/IRA than by a negotiated future with Dublin to unite Ireland under a federal arrangement.

Unionists must realise that they have a far more productive and safeguarded future with an increasingly self-confident and affluent Irish Republic, than they do with a power-sharing Sinn Féin party, who have often been antagonistic toward them, their state and their legitimate place on the island of Ireland.

To underwrite this, Irish nationalists – north and south – must also be prepared to re-examine and compromise treasured shibboleths established from the formation of the Irish state and before.

In doing so, a new Ireland can move forward with the imagination and courage of a state no longer mired in the politically infantile legacies of the 20th Century. Revolution and rebellion, church-state controls and post-colonial inferiority complexes must be consigned to the dustbin of history.

And what of Sinn Féin’s place in bringing about Irish unity?

While in attendance at a recent address by Mary Lou McDonald at a civic unionism forum at Queen’s University Belfast, I was struck by the president’s comments regarding the party’s lack of any unilateral ownership of a “blueprint for a unitary state”.

I wonder if she might go further? In the event of some future dispensation where political unionism tentatively discussed the parameters of a “new Ireland” with the sitting government of the day in the Republic, might Sinn Féin remove themselves from these negotiations due to the emotional and historical baggage that their party carries for that community? And instead, focus their efforts on making any new Ireland a truly inclusive and just socialist Republic for all.

•  Dr Thomas Paul Burgess is Director of Youth & Community Work in The School of Applied Social Studies, University College Cork. His book, ‘The Contested Identities of Ulster Catholics’ is published by Palgrave Macmillan and his latest novel, ‘Through Hollow Lands’ by Urbane Books.