Social progress in Ireland has far to go

A bleak conservative view of Ireland is a thing of the past, argues CWU organiser Ruairí Creaney 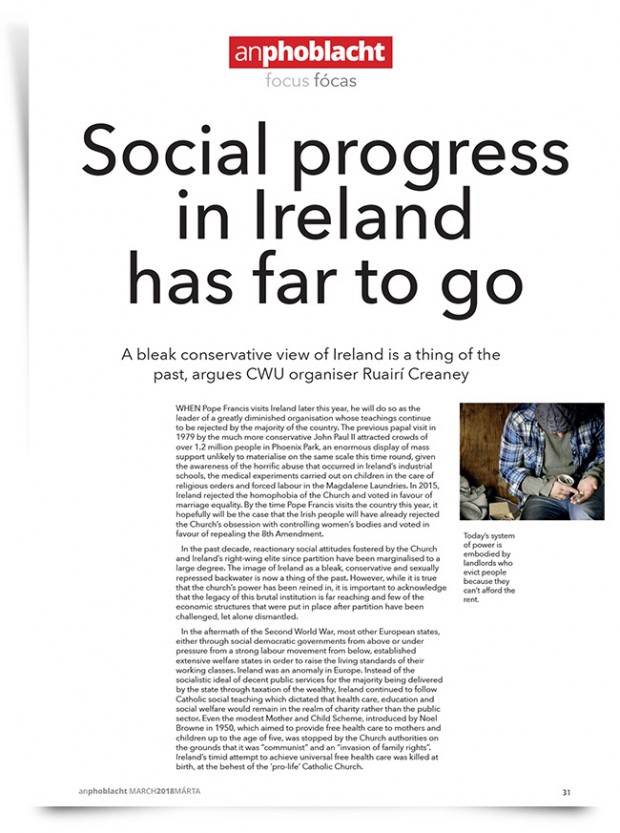 As well as sexism and misogyny, class bigotry has always been a dominating feature of the Irish state, and it is this bigotry that has perhaps been challenged least in recent years.

When Pope Francis visits Ireland later this year, he will do so as the leader of a greatly diminished organisation whose teachings continue to be rejected by the majority of the country. The previous papal visit in 1979 by the much more conservative John Paul II attracted crowds of over 1.2 million people in Phoenix Park, an enormous display of mass support unlikely to materialise on the same scale this time round, given the awareness of the horrific abuse that occurred in Ireland’s industrial schools, the medical experiments carried out on children in the care of religious orders and forced labour in the Magdalene Laundries. In 2015, Ireland rejected the homophobia of the Church and voted in favour of marriage equality. By the time Pope Francis visits the country this year, it hopefully will be the case that the Irish people will have already rejected the Church’s obsession with controlling women’s bodies and voted in favour of repealing the 8th Amendment.

In the past decade, reactionary social attitudes fostered by the Church and Ireland’s right-wing elite since partition have been marginalised to a large degree. The image of Ireland as a bleak, conservative and sexually repressed backwater is now a thing of the past. However, while it is true that the church’s power has been reined in, it is important to acknowledge that the legacy of this brutal institution is far reaching and few of the economic structures that were put in place after partition have been challenged, let alone dismantled.

In the aftermath of the Second World War, most other European states, either through social democratic governments from above or under pressure from a strong labour movement from below, established extensive welfare states in order to raise the living standards of their working classes. Ireland was an anomaly in Europe. Instead of the socialistic ideal of decent public services for the majority being delivered by the state through taxation of the wealthy, Ireland continued to follow Catholic social teaching which dictated that health care, education and social welfare would remain in the realm of charity rather than the public sector. Even the modest Mother and Child Scheme, introduced by Noel Browne in 1950, which aimed to provide free health care to mothers and children up to the age of five, was stopped by the Church authorities on the grounds that it was “communist” and an “invasion of family rights”. Ireland’s timid attempt to achieve universal free health care was killed at birth, at the behest of the ‘pro-life’ Catholic Church.

Charity was a convenience that the religious orders would never give up. It bestowed upon them a system of power and patronage that would have otherwise been impossible had services like health and education been under democratic public control. As well as that, it serviced the needs of the right-wing elites by diminishing the expectations of what social rights Irish people felt they were entitled to as citizens. Thus, it is seen as perfectly normal in the south of Ireland that the access to health care should be determined by the amount of money in your wallet. In housing too, market forces and reliance on charity dictates policy. Whether or not you have a roof over your head is a matter between you and your landlord, a bank or the vulture fund that wants to repossess your home. The role of government in this regard is merely to ensure you have access to a charity should you be faced with the worst-case scenario.

On top of preventing a proper welfare state materializing, the Church fought to ensure the role of women in the Irish state was restricted to child bearing and house work, a vision that took hold at the very foundation of the Free State. During the revolutionary period, many women displayed a radicalism that challenged narrow Catholic nationalism and conservative pre-determined gender roles. This was a radicalism that did not go unnoticed, as John M Regan points out in The Irish Counter-Revolution, 1921-1936: “After the civil war, there was deep suspicion about the role republican women… All the female Dáil deputies voted against the treaty”.

As well as sexism and misogyny, class bigotry has always been a dominating feature of the Irish state, and it is this bigotry that has perhaps been challenged least in recent years. The sexual orientation and immigrant background of Leo Varadkar, for instance, was picked up by much of the international media as proof positive of Ireland’s apparently unstoppable liberalisation. What was rarely mentioned was that he built his leadership on a hate campaign aimed at welfare recipients. Varadkar’s sexual orientation does little to diminish the open contempt with which he obviously holds working-class people.

The conservative Ireland that Pope John Paul II visited in 1979 is almost unrecognisable today. However, conservative official Ireland is not dead and done; it has merely changed it clothes to become more “liberal” and “diverse”. The counter-revolution that started in 1922 is still very much intact and the same exploitative economic power structures remain unchanged. Ireland’s right-wing elites ensure that any progressive gains that are made do not interfere with the profits of landlords, corporations and vulture funds. Their equality is a strictly neo-liberal version of equality. Social progress is tolerated only insofar as it does not alter capitalist power relations. Hence, in a spectacle that should haunt all progressives, corporate entities like PayPal, Microsoft and Bank of Ireland that did precisely nothing to further the cause of LGBT people have the brass neck to take leading positions in the annual Dublin Pride Parade.

The system of power in Ireland is no longer personified by bishops who possess a weird fixation on other people’s sex lives. Today’s system of power is embodied by the landlord who evicts a pensioner because she can’t afford the increased rent; it is the multinational firm that is assured by powerful people that they will never have to deal with trade unions or treat their workers fairly; the banking system whose debts we will be paying off for decades; it is the abusive system that forces 3,000 children growing up in homelessness causing unfathomable psychological damage; it is the lawyers, the accountants and the advisors who help the rich avoid paying tax, cheating the Irish public out of vital funds for our hospitals, schools, communities and public transport systems.