• The Central Bank is responsible for making sure that the banking system is functioning properly for the banks – but what about for the public?

Protecting the customer, the consumer of bank services, is a secondary task for the Central Bank

AS WE FACE in to yet another round of scandals, maladministration, a failure to regulate and a general rip-off of the ordinary citizen, it is more and more apparent that the political and economic system isn’t working – at least not for ordinary voters.

The rich and powerful are still doing well and – under this Fine Gael/Fianna Fáil partnership government – can expect to stay doing well.

The latest row about the banks taking people off tracker mortgages – without legal justification – and forcing them to pay much higher repayments on other mortgage schemes just emphasises the point.

This is not a new issue. It has been known for a year and yet nothing has been done. The regulatory authority – the Central Bank – failed to regulate. In Pearse Doherty’s memorable words, it was a case of the watchdog that didn’t bark.

And the Fine Gael/Independent Government, with no murmur of dissent from Fianna Fáil, was content to let the issue stew.  But now that it has burst upon the political scene with a vengeance, they are all huff and puff, threatening dire action against the banks and so on.

But contrast this with the petty vendetta that Leo Varadkar launched against people on social welfare.  While his campaign failed to net many ‘fraudsters’ (for the prosaic reason that not many people were guilty of any fraud), it was still pursued with maximum vigour and a blaze of publicity.

People whose crime was to get a few hundred euro more than they were entitled to have ended up in courts – but bankers responsible for some people losing their homes and for many thousands of others suffering stress and hardship can’t be found on the courts’ rolls. 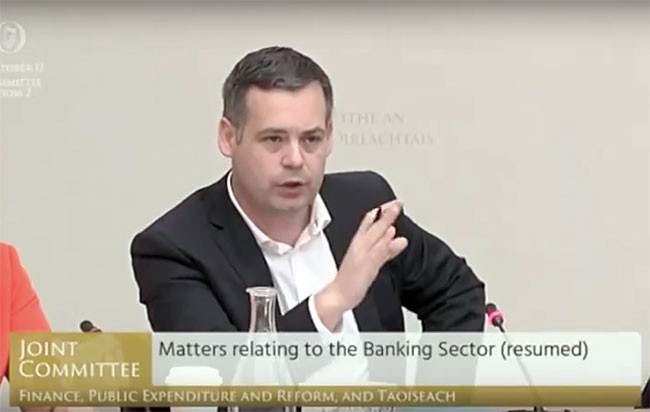 In the case of the banks, apparently, there are ‘difficulties’ in proving intent and establishing what crime exactly has been committed. And there is another ‘difficulty’, apparently, as to whether there is individual responsibility or whether the banks as institutions should be called to account.

The point is that some individual in the banks instructed that this illegal action be taken; and other individuals, knowingly or otherwise, did it. Not so hard, surely, to find out who is responsible and charge him or her?

Institutionally, though, there is a bigger problem.

The Roman poet Horace once asked who would police the police. As we contemplate the failure of the Central Bank – yet again – this question comes strongly to the fore.

The Central Bank is responsible for making sure that the banking system is functioning, that the banks have the capital need for investment in the economy, and in our society that means ensuring that the banks make a profit.

Protecting the customer, the consumer of bank services, is a secondary task.

But what happens when ensuring the banks’ profitability means that consumers are ripped off and money is taken from them illegally? The rip-off is a small problem but profitability remains central, especially as the banks are readied for reprivatisation, which means making sure that they are profitable enough for a vulture capitalist to buy them.

Don’t worry, though. The Government is determined – yes, determined – that this problem will be resolved by Christmas.

Nothing to see here, so move along, please.

But there is something to see.

This is not just a question of dodgy practices in the banks – all the banks at the same time, apparently. It is a question of the Government’s priorities for the social and economic systems.

Fianna Fáil, from the heights of its pretended opposition, may nitpick on certain issues (for the sake of a bit of publicity and to pretend to be some sort of opposition) but both parties accept the priority of the market – in finance as well as in housing, health and even education.

To put it simply, if you vote for either of these parties you can’t complain when you get the same rip-off policies that they’ve always given us.

The answer is to vote for change. Not just, or mainly, a change of name of those in charge, but a change of policy to put the needs of ordinary working people to the forefront of all policy positions.

Surely it’s time for all those who claim to speak for working people to set aside personal ambitions and combine to argue for the policies that will deliver the change that people need.

Sinn Féin is committed to that. Are the other parties, on both the social democratic and Trotskyist Left, willing to do the same?