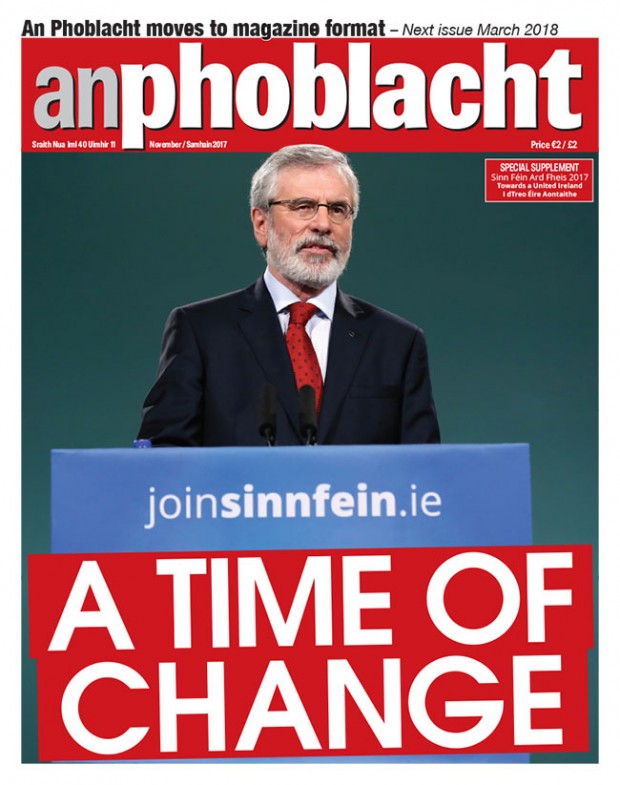 WE ARE in the midst of a truly historic and exciting time of change within Sinn Féin and for our struggle for a united Ireland and an Irish Republic.

The 2017 Ard Fheis was another signpost in that change.

When Gerry Adams took over as President of Sinn Féin the war was raging, censorship was in place and the party was on the margins of the political process. At that time, there were only 10 councillors in the South.

The growth of the party is meaningless unless accompanied by a real change in the lives or people and progress to an Irish Republic.

Gerry Adams, with others, has led the process of change.

The war is over and we now have a peaceful and democratic pathway to Irish unity. The perpetual unionist majority is gone. The censorship and repression of the past has ended and power-sharing and equality must be at the centre of institutions in the North.

Sinn Féin is no longer on the margins. Sinn Féin is at the centre of political developments across the island

This was under the leadership of Gerry Adams. As he said at the Ard Fheis, leadership is also about knowing when it is time to pass on the baton to the next generation and that time is now.

Throughout the history of struggle there comes a time for a new generation to step forward. Anyone looking in on the Ard Fheis will be a witness to the ability of a new generation of Sinn Féin leaders. The challenges remain: to continue to build the party, to be in government North and South, to deliver rights and equality, to make a real change in the lives of citizens, and to progress the cause of Irish unity.

We have the leadership to meet these challenges and we look forward with confidence to the election of a new leader of Sinn Féin.

Just as Sinn Féin is in a process of renewal and regeneration, so is An Phoblacht. The print and newspaper environment is changing in a fast-developing world of social media. Our newsprint edition is now only a fraction of our online readership and with a demand for longer, reflective pieces and discussions on articles.

With this in mind, we are ending the monthly print edition with this issue and we will be moving to a new magazine format with the first edition in March 2018.

We will continue to produce online articles and reports with the support of our contributors.

We want to thank all those who have worked on the monthly edition, the contributors, photographers, production staff, sellers and – most importantly – you, the readers.

We especially extend our thanks to outgoing Editor John Hedges and Designer Mark Dawson for their commitment and skills in producing the monthly paper and associated publications over the past seven years while introducing and maintaining our social media platforms.

So onwards to another chapter for Sinn Féin and An Phoblacht. In the words of Gerry Adams’s Ard Fheis speech: