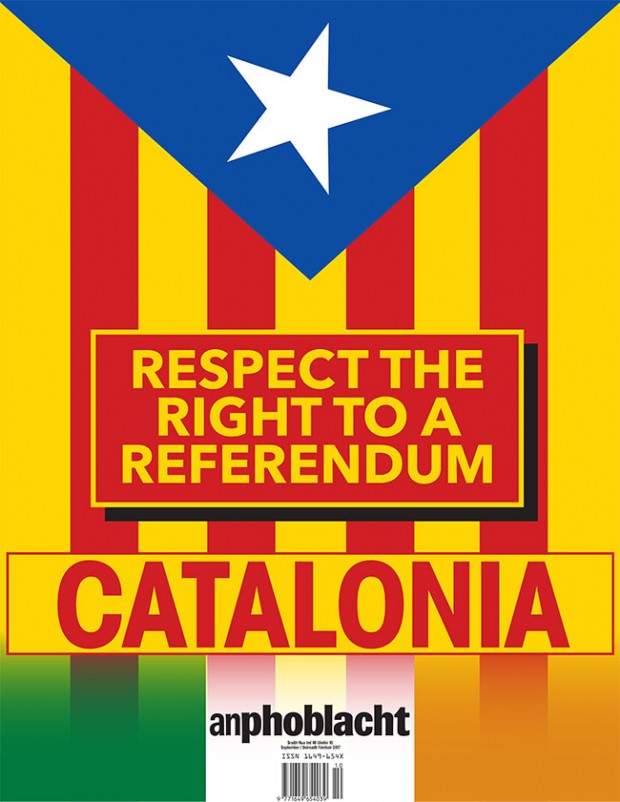 JUST DAYS before the Spanish state placed Catalonia under siege ahead of the 1 October independence referendum called by the Catalan Government, 25 members of Sinn Féin Republican Youth were guests of youth movement Joventus d’Esquerra Republicana de Catalunya (JERC) to take part in the Catalan National Day on 11 September.

The Spanish state’s crackdown on the democratic poll began with threats to arrest more than 700 mayors supporting the referendum, police raids on printers of referendum information, and orders to postal workers not to handle mail-shots. Websites were blocked. Squads of armed paramilitary police descended on Catalonia Government offices to arrest and threaten officials and also seize ballot boxes. Madrid moved to freeze Catalonia’s finances

It was in the build-up to all this that the SFRY delegation arrived in a tense Catalunya.

Solidarity between Sinn Féin Republican Youth and JERC (Young Republican Left of Catalonia) has been long established. Members of JERC are invited annually to attend the SFRY National Congress and this has created a strong sense of solidarity between the two organisations . As well as attending Catalan National Day celebrations (which are renowned for the mass mobilisation of millions), SFRY were also invited to engagements with the Asemblea Nacional Catalana (Catalan National Assembly).

The Irish republican activists were given a tour of Barcelona City Hall by Alfred Bosch. Alfred is a former Mayor of Barcelona and prominent pro-Catalan independence politician from Esquerra Republicana de Catalunya (Left Republicans of Catalunya), the senior party of JERC.

There they were told about the history of the parliament, its artwork and architecture, and how the mechanisms of local government could be used to advance the left republican ideas of Esquerra Republicana de Catalunya.

On Monday 11 September, the SFRY contingent flew the flag for Ireland at La Diada, the National Day rally in which two million Catalans take to the streets to demand their national sovereignty. La Diada remains a huge spectacle that attracts activists from around the globe who are supporters of national sovereignty in their respective home countries. 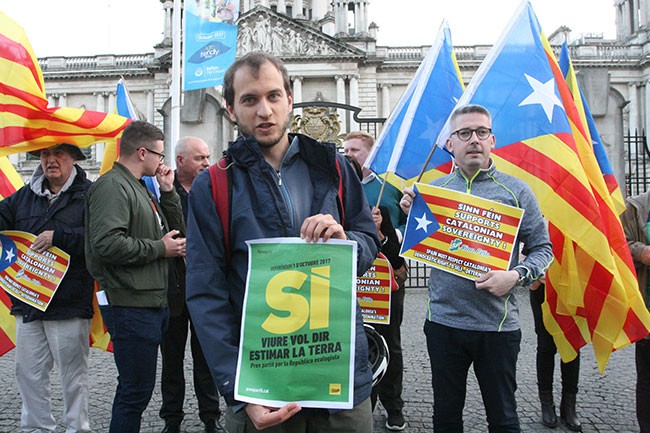 The Assembly has organised many national demonstrations (including a human chain that spanned the length of Catalunya) and the People’s Referendum of 2014, in which the Catalans expressed their desire for freedom.

SFRY activists found it striking that a unifying factor for the Catalan people is their language and how that creates a sense of nationhood  For them, this conveyed the importance of the  full implementation of the ‘Plean 20 Bliain’ and Acht na Gaeilge.  The importance of our native language remains a crucial element of our own national liberation struggle. As Mairtín Ó Cadhain said: “Is í slánú na Gaeilge Athgabháil na hÉireann agus is í Athgabháil na hÉireann slánú na Gaeilge.”

Now the SFRY members are back in Ireland but Spain’s suppression of the democratic voice of the people of Catalonia continues. So Sinn Féin Republican Youth activists are involved in solidarity actions across the island of Ireland to help raise public awareness as the mainstream media sidelines the issue of an EU state banning political rallies and armed police confiscating ballot boxes.

The Catalan Parliament was suspended on the morning of Wednesday 20 September.

General Franco, the military dictator who was in power from 1939, may have died in 1975 but the shadow of fascist Spain still looms over Catalonia.

International solidarity and pressure is vital to enable the Catalan people to freely express their will through the democratic process.