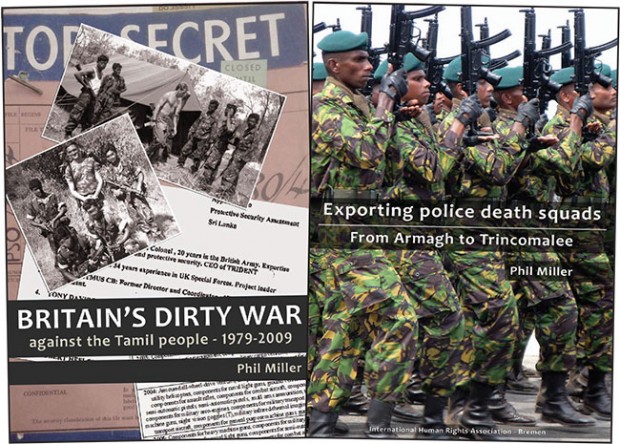 THE British Government’s support for the indiscriminate military repression of Tamils by the Sri Lankan regime will be under even greater scrutiny now that a Tamil widow has lodged a complaint with the North’s Police Ombudsman over the killing of ten of her relatives in 1986 by a special police unit trained by the elite Special Support Unit of the Royal Ulster Constabulary, predecessor of the PSNI.

The killings in Sri Lanka were carried out by the regime’s Special Task Force (STF) police commando unit. The STF was established after top police officers from the former British colony had visited Belfast to learn from their RUC hosts to aid their war with the Tamil Tigers guerrillas fighting for an independent homeland.

Belfast-based solicitor Darragh Mackin is representing the woman complainant. Her identity is being withheld because she fears being murdered by state forces.

“The Special Task Force would not have acquired the paramilitary characteristics of the SSU without the engagement between the RUC and the Sri Lankan police,” Mackin said.

Reporting on the Tamil woman complainant’s case human rights activist and researcher Phil Miller stated that senior Sri Lankan police officers visited Belfast in 1983. This was just months after the RUC’s Special Support Unit ambushed and killed six men in Armagh in what became notorious as the ‘shoot-to-kill’ assassinations linked to a deliberate British Government strategy of killing rather than arresting suspects.

IRA Volunteers Seán Burns, Eugene Toman and Gervaise McKerr, INLA members Seamus Grew and Roddy Carroll, and 17-year-old civilian Michael Tighe were shot dead by the RUC unit described by Miller as an elite squad trained by the SAS whose rules of engagement were to use overwhelming “firepower, speed and aggression”.

In her complaint to the North’s Police Ombudsman, the woman refers to a series of letters dated from 1983 in which Sri Lankan diplomats asked London for help with “commando operations training” for a superintendent “who would be responsible for training and administration of a paramilitary unit to be set up here”.

As a consequence of this exchange, senior Sri Lankan police officers visited the RUC in Belfast. 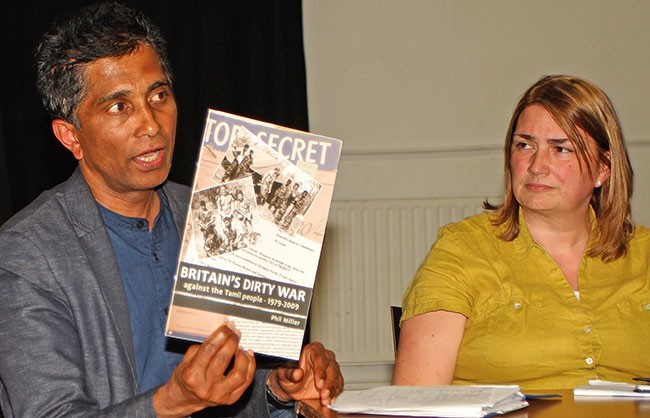 From Armagh to Trincomalee

In his 2015 report, Exporting Police Death Squads: From Armagh to Trincomalee, Phil Miller reveals that Sri Lanka’s STF was established between 1983 and 1984, within a year of the ‘shoot-to-kill’ operations in Armagh. Those tasked with training this specialist unit were British mercenaries who had served in the SAS.

A number of them “served in some of the British Army’s most sensitive operations in Northern Ireland” while former SAS Major Brian Baty – who commanded the SAS squadron deployed to South Armagh in 1976 – was the most senior British former special forces soldier in Sri Lanka in 1986 “where he trained the STF to fight the Tamil Tigers”.

One of the first recruits to the STF was Kapila Jayasekara, who commended the squad responsible for the murder in January 2006 of five Tamil students playing on a beach in Trincomalee – Sri Lanka’s military and naval HQ and which houses training bases.

The victims became known as ‘The Trinco 5’.

“At around 7:30pm, a grenade was thrown from a green three-wheeler towards the students which, according to reports, then proceeded into Fort Frederick, the army headquarters. Three of the students were injured from the explosion.

“Jeeps from the Sri Lankan police’s Special Task Force arrived soon after, accompanied by the Superintendent of Police Kapila Jayasekara. Members of the STF, wearing full facemasks, put the youths into their jeeps and beat them with their rifle butts.

“The students were then pushed onto the road and shot on the seafront, by the statue of Mahatma Gandhi.”

All had been shot through the back of the head.

The website Together Against Genocide reported in January of this year that 13 STF officers were arrested in 2006 but released shortly afterwards. They were then rearrested in July 2013, only to be released again in October 2013.

“The STF commander at the time [Kapila Jayasekara] was identified at the crime scene; he was not, however, among the STF officers arrested. On the contrary, he remains in the area and has since been promoted. In October 2014, the Government stated that the trial had been suspended in order to locate witnesses abroad.” 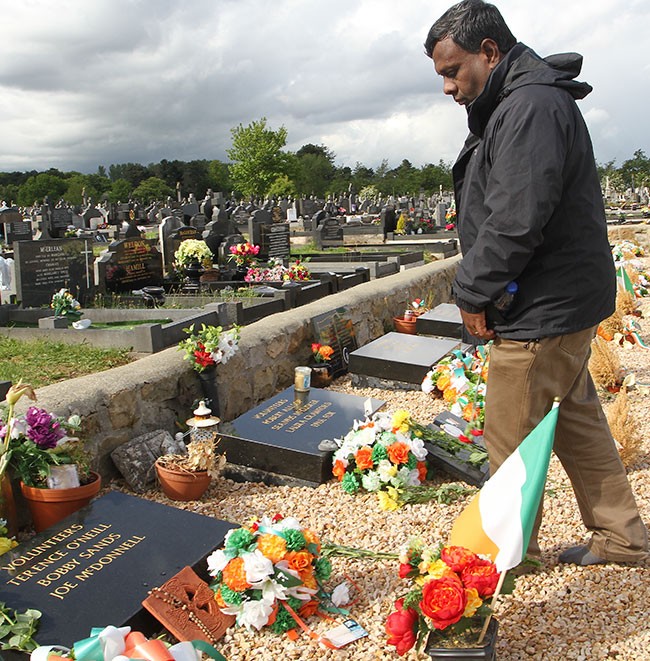 Britain withdrew in 1948 from Ceylon (as Sri Lanka was known then), leaving behind a constitutional arrangement that handed power to the Sinhalese majority and the Tamils being disenfranchised and their language rights abolished.

A month beforehand, two senior Sri Lankan police officers were in Belfast “to see at firsthand the roles of police and army in counter-terrorist operations”. And, according to Miller, the pair also attended MI5’s ‘International Conference on Terrorist Devices and Methods’ and visited the Metropolitan Police Special Branch at New Scotland Yard.

These visits were arranged by senior British Government civil servants.

Miller emphasises how even in this period – between 1979 and 1983, before the Tamil armed struggle had really taken off – MI5, with the imprimatur of the Margaret Thatcher Government was already spying on London-based Tamil activists in London and sending senior counter-insurgency advisers to the Sri Lanka capital, Colombo.

This was, according to the British Foreign & Commonwealth Office, due to “the importance to us of Sri Lanka’s stability and pro-Western alignment”.

Blazing that particular trail for the British was John Percival ‘Jack’ Morton.

Morton served with Special Branch in the Punjab during the anti-colonial uprisings that led to the end of British rule in India. He subsequently joined MI5 and worked as a senior intelligence adviser in Malaya (1952-54) and in the North during the IRA Border Campaign (1956-62).

On his return to the North in 1973, Morton was tasked with reorganising the RUC’s Special Branch. Special Branch would gain the reputation of being “a force within a force” running unionist paramilitary death squads.

Peter Ricketts, an aide to then Foreign Secretary Geoffrey Howe, in a letter to Margaret Thatcher’s Private Secretary, talks of the deniable nature of this relationship, saying:

“We have made it clear that this is a purely commercial matter and HMG are not involved.”

One of those “commercial” firms the British Government could hold at arm’s length but still ‘influence’ was KMS Ltd. KMS was founded in 1974 by ex-SAS Major David Walker and a former head of SAS Group Intelligence, Lieutenant Colonel Andrew Nightingale. It was supposed to have taken its name from Keenie Meenie Services, variously said to be derived from Swahili, Arabic or SAS slang for covert operations.

KMS had already trained the feudal Sultan of Oman’s special forces and would go on to work with the right-wing the Contras in Nicaragua (where it is claimed it bombed a hospital as well as pipelines and harbours) and eventually the Taliban.

John K. Cooley has written about the role of KMS in Afghanistan, reporting:

“It was indeed KMS, along with individual SAS veterans, to which the main British role in training holy warrior cadre for the Afghan Jihad seems to have fallen.”

In their official history, Sri Lanka’s STF refers to the training provided by KMS, including the use of the five psychological interrogation techniques used by British military and RUC Special Branch interrogators to torture internees and detainees in the North.

When its role in the Iran-Contra affair was exposed in 1987, KMS was dissolved and Saladin Holdings replaced it.

Archie Hamilton, Tory Defence Minister between 1986 and 1993 was a director of Saladin from 1993 to 1997, indicating how distant “Her Majesty’s Government” really was from its former special forces killers, including the SAS. 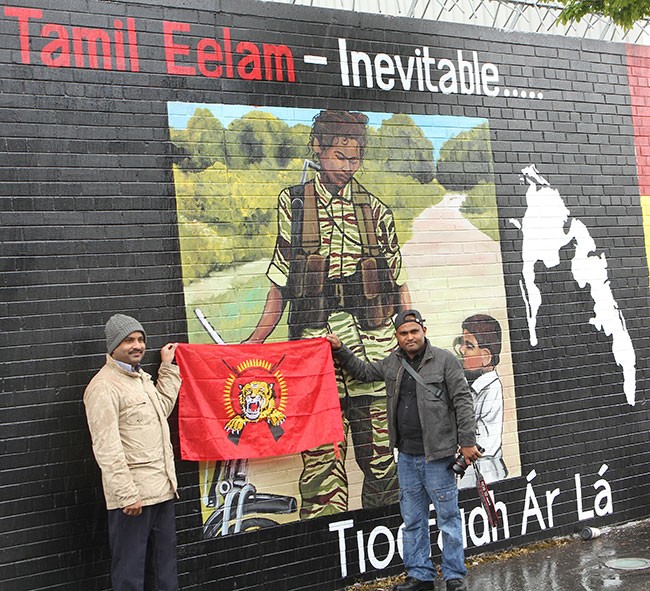 The 30-year war in Sri Lanka officially ended in 2009 as the military cornered the Liberation Tigers of Tamil Eelam fighters and civilians into what became known as ‘The Killing Fields’, liquidating up to 70,000 people.

300,000 ethnic Tamil civilians fled the fighting, only to be rounded up and ‘screened’ for militant sympathies in squalid barbed-wire internment camps. By August 2009, Amnesty International warned that this system of indefinite and arbitrary detention included some 50,000 children.

It may be a coincidence that this was precisely the six-month period when two senior PSNI officers, Duncan McCausland and Gary White, were seconded from the PSNI and deployed to Sri Lanka by the Foreign & Commonwealth Office. The pair, who retired from the PSNI with the ranks of Assistant Chief Constable and Chief Superintendent respectively, were ordered “to act as a ‘critical friend’ to the Sri Lankan police” and provide “hands-on assistance”.

Corporate Watch has discovered through a Freedom of Information request to the PSNI that the itinerary for their first visit included “high-level meetings with Inspector General of Police” Jayantha Wickramaratne, who trained in Scotland and the North during 2007.

As Inspector General of Police, Wickramaratne was part of the ‘Task Force’ responsible for the administration of the internment camps.

As with so many aspects of the conflict in the North, the blanket of secrecy used to cover up Britain’s dirty war is gradually peeled back to reveal the lies and cover-ups.

The job ahead for the Police Ombudsman is surely to expose the subterranean dealings between the British state, the RUC and British Army during the conflict, and a Sri Lankan government that carried out genocide against the Tamil people.