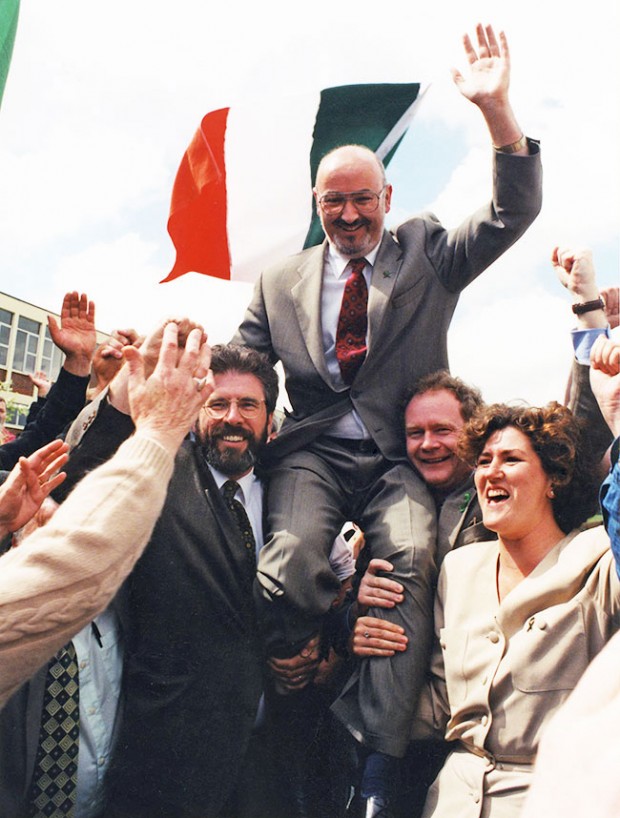 ON 26 June 2017, I had the honour to be elected Ardmhéara Bhaile Átha Cliath in Dublin’s City Hall. Exactly 20 years earlier, on 26 June 1997, Caoimhghín Ó Caoláin walked through the gates of Leinster House, on the new Dáil’s first sitting day, as the first participating Sinn Féin TD, proudly representing the people of Cavan and Monaghan.

For most of the years between those two events, Caoimhghín and myself worked together in Leinster House.

So much history, so many historic connections.

City Hall, where my election as Ardmhéara Bhaile Átha Cliath took place, was occupied by soldiers of the Irish Republic in Easter 1916.

The Mansion House, Teach an Ardmhéara, where I live and work during my year in office, was the meeting place of An Chéad Dáil Éireann on 21 January 1919.

When Caoimhghín took his seat in 1997, a large group of republicans walked with him from the Mansion House to Leinster House, symbolising our unswerving belief that to fulfill the Proclamation of the Irish Republic of 1916 and the Declaration of Independence of 1919, we must work for a Dáil that is truly Dáil Éireann – a Dáil for all of Ireland, all 32 Counties.

That was reiterated in January 2009 when a special sitting of the Dáil took place in Teach an Ardmhéara to mark the 90th anniversary of An Chéad Dáil Éireann. Caoimhghín, as Dáil leader of Sinn Féin, said in his address:

“As we mark the 90th anniversary of the First Dáil, we look forward to a day when the elected representatives of all the people of our country will once more gather in the national assembly of a united Ireland.

This was the aim that guided Caoimhghín and myself over the nearly two decades we worked together in Leinster House – this and the implementation of the First Dáil’s Democratic Programme, guaranteeing social and economic rights and true equality for all the people of Ireland. 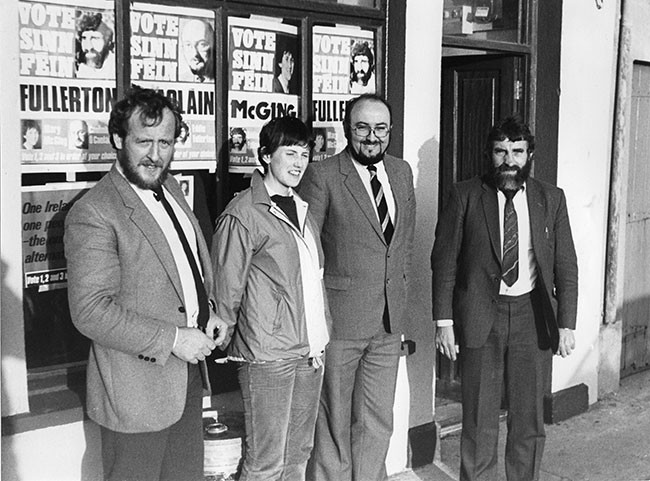 For the first five years, Caoimhghín was the sole Sinn Féin TD and I was his only Sinn Féin co-worker and comrade in Leinster House.

We were pioneers. We were pathfinders for others who were to follow.

Caoimhghín was elected when the ‘dual mandate’ still existed, whereby TDs could also be members of local authorities. For Caoimhghín this meant a gruelling schedule of Dáil attendance in Dublin combined with meetings of Monaghan County Council, the Health Board and numerous other committees. And, on top of that, as a key regional and national leader of Sinn Féin, he had multiple duties in that capacity which entailed countless late nights and early mornings. He had – and has – a deep-seated work ethic, pushing himself to the limit and always striving for better for the cause to which he has dedicated himself.

Initially, this relentless schedule was a bit of a shock to myself. One of the features of the first few weeks working with Caoimhghín from September 1997, when I started in the Dáil, was my eventually successful effort to convince him that it was necessary to eat! (That said, it was a sandwich at the desk rather than a break for lunch or evening meal.)

All this was taking place at a momentous time.

The Peace Process was at its most crucial stage. Negotiations in 1997 and 1998 led to the Good Friday Agreement. The spotlight was on Sinn Féin and we were involved in intense engagements, internally and externally.

Caoimhghín, to add to his many duties, played a key role in promoting the Peace Process and successfully bringing republicans together on the common path of a new strategy for peace, democracy and Irish unity. The unity and cohesion that was maintained among republicans at a time of such great change was due in no small measure to the leadership provided, both locally and nationally, by Caoimhghín.

The broadcasting ban on Sinn Féin in the 26 Counties had only been lifted since 1993 and the party was just beginning to build a political challenge to the total domination of Fianna Fáil and Fine Gael. It was to be a long road ahead. 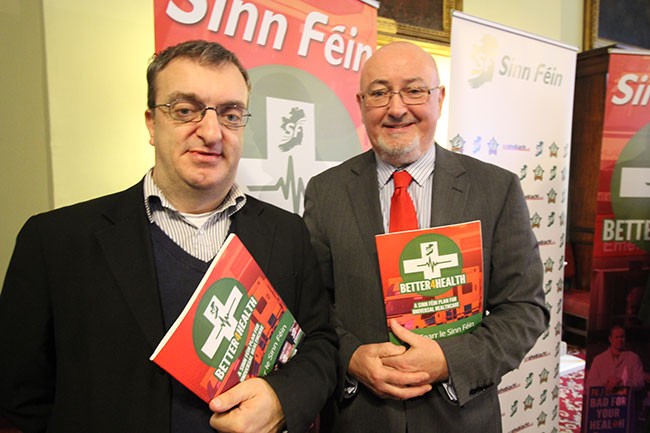 In the Dáil, it was an uphill struggle as one voice among 166.

I recall on one time when Caoimhghín asked Taoiseach Bertie Ahern a key question on the Peace Process and received a reply that was deemed newsworthy. The Taoiseach’s reply was duly carried on RTÉ News but not Caoimhghín’s question – in fact, he was not even mentioned. When I challenged the RTÉ correspondent on this he replied: “What the Government says is news. What others say is views.”

On another occasion, Caoimhghín submitted a written question which exposed the fact that Bertie Ahern had brought in a package of special privileges for former Taoisigh, including a paid secretary for life! The Sunday Independent reported the reply on page 2 but never credited Caoimhghín with the question. When I challenged the journalist he told me to “get off your high horse”. Years later, much to his puzzlement, I reminded him, in Caoimhghín’s presence, that I still did not own a horse.

During that first term there were some veteran TDs who were more vociferous than others in their utter hostility to Sinn Féin and their regret that we were even allowed to exist, notably the likes of Des O’Malley.

I recall an inebriated Fine Gael TD heckling Caoimhghín during one of his first Dáil speeches (a tradition that some continue today). Others did not know what to make of us. One  journalist described curious TDs looking up at Caoimhghín in his back row seat as if he were an exotically-coloured bird perched in a tree. 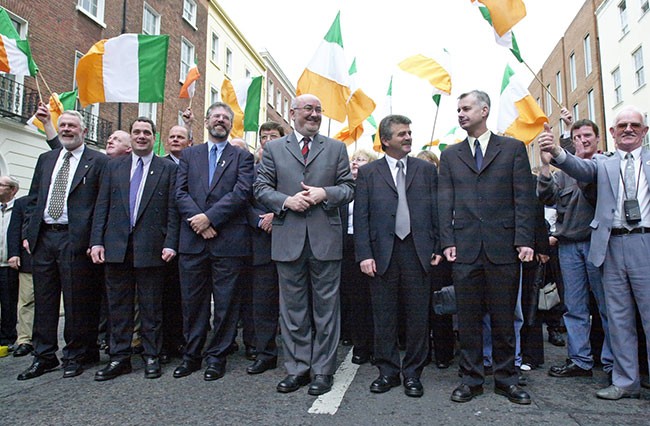 Some, especially in Fianna Fáil, seemed to believe that Sinn Féin was a ‘Northern party’ and our policies were not to be taken seriously, making them a little puzzled when we voted against the Fianna Fáil Government. We were happy to assist in their political education over the following years.

Challenging as those days were, it was a great privilege to carry the Sinn Féin banner to that level. It became a rallying point for Sinn Féin across the country as we used the position in Leinster House to help build Sinn Féin.

Significant advances were made in local elections in 1999, notably in Counties Cavan and Monaghan. (Indeed, the story of Sinn Féin’s growth in those counties is a remarkable one, ahead of their time in many ways, and one that needs to be written – hopefully by Caoimhghín himself some day.) But the Dáil breakthrough of 1997 helped build for the local election advances of 1999 across the 26 Counties and on to the further breakthrough of the 2002 general election.

You can imagine the satisfaction of Caoimhghín and myself in 2002 when we were joined by four new Sinn Féin TDs in 2002 – Martin Ferris in Kerry North, Aengus Ó Snodaigh in Dublin South Central, Seán Crowe in Dublin South-West and Arthur Morgan in Louth, and the support staff that came with them. This meant there were great opportunities and great challenges also as we built a Dáil team, including our TDs and support staff, and moulded them into a collective, working as a collective, with all voices valued.

Much could be written about the years that followed and the development of Sinn Féin to its unprecedented strength today. For that advance, huge credit is owed to Caoimhghín Ó Caoloáin TD. But for now I salute my comrade and friend Caoimhghín as we recall the time, 20 years ago, when together we rolled up our sleeves and laid the foundations.