Nothing new in Malachi O’Doherty’s new book on Adams 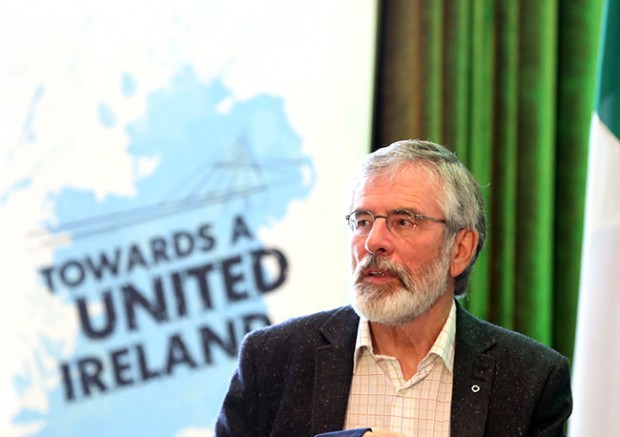 No political context, no objective outlining of the conditions of the time, the sectarian pogroms or the discrimination against nationalists and Catholics rife in Belfast

THE BEST BIOGRAPHIES detail the experiences that mould and shape the life of their subject. We travel with the biographer as we discover the new, the unknown actions, and untold anecdotes that reveal the person.

This biography is different.

Gerry Adams: An Unauthorised Life, by Malachi O’Doherty, tells us more about the biographer than the subject.

All good biographies need a distance and an objectivity that should let the story of a life lived tell itself. Here it is obvious that the author is not objective. He selects and presents history to serve his narrative and not an exposition of the subject.

In his view of history, republicans always wanted a war, wanted conflict on the streets. They had a plan to provoke conflict. The ruling unionist Establishment was benign and the actions of the British Government were simply foolish.

The first part of the book deals with the 1950s and early 1960s, painting a picture of an idyllic time when there was no conflict and no trouble. In the oddity of this book this section reads as more of a memoir than a biography. It is as if the writer grew up beside Gerry Adams, went to school with him. The reason for this is that it draws heavily from Gerry Adams’s own writings and his autobiography, Before the Dawn.

This book offers no political context, no objective outlining of the conditions of the time, the sectarian pogroms or the discrimination against nationalists and Catholics rife in Belfast. In common with the rest of the book, it puts unattributed, sneering comments forward as fact to raise a question about Gerry Adams’s character. He even questions the truthfulness of a story Gerry told about his First Confession in church. “Gerry’s sin was cheating at marbles, however that was done.”

In the section dealing with the onset of the conflict, again context is dropped in favour of contradictory narratives.

One proposition by O’Doherty is that the IRA and republicans were completely inept and amateur, while also being extremely devious and strategic in drawing first the unionist establishment and then the British Government into a conflict. The Falls Curfew by the British Army was badly done and Bloody Sunday was a “calamity”.

The Royal Ulster Constabulary are described in their dealing with civil rights protesters as “stolid and disciplined constables”!

The burning of Catholic homes is explained because:

“The loyalists swarming onto the Falls perhaps really did fear the police had been overwhelmed and that the Shankill was exposed to invasion by the IRA.”

God forbid that it was actually the same sectarian pogroms which had existed in the 19th century as well as since the foundation of the gerrymandered unionist state. 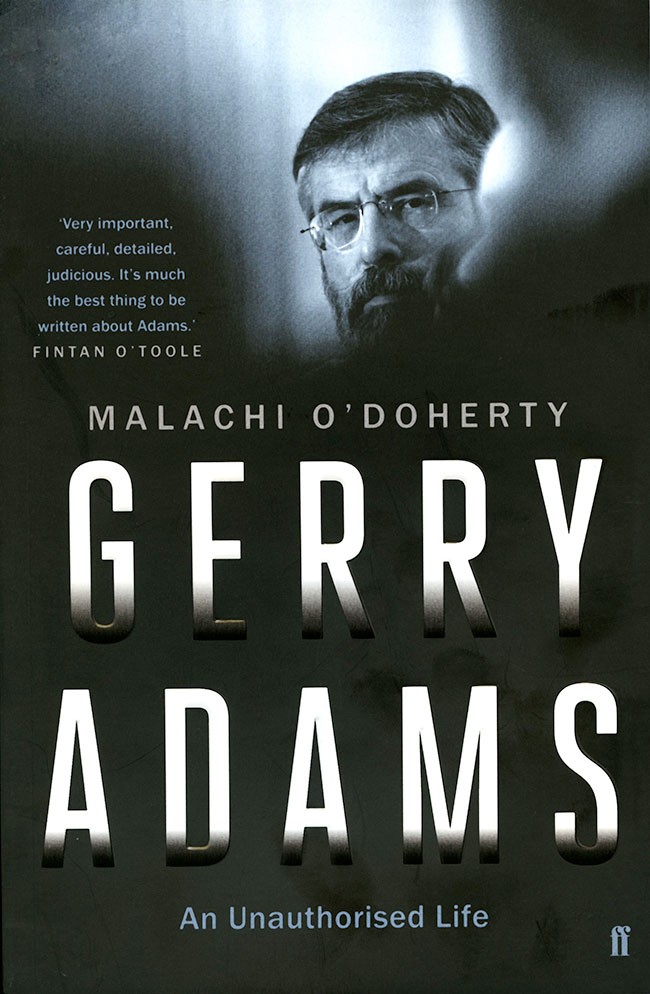 The terminology used in the book is largely pejorative to the point of Establishment, anti-republican propaganda, so IRA Volunteers are “blooded” in the same way packs of dogs would be for hunting.

Much of the credibility afforded to Malachi O’Doherty is that he grew up in west Belfast in an estate called Riverdale. He adopts the mantle of an ‘insider’ who became outspoken, an honest and fearless writer, while the vast majority of us are lackeys, caught up in the cult of Sinn Féin and Gerry Adams.

I too grew up in Riverdale, although years apart from Malachi. And there are telling references in the book that demonstrate that history and fact is set aside when it doesn’t fit with the narrative.

In one section, the Military Reaction Force of the British Army is described as “stirring up trouble by shooting at civilians”. What is omitted is that the same unit was responsible for shooting dead Patrick McVeigh and wounding four others about 200 yards from Malachi’s family home – the indiscriminate killing by the British forces that could never make it into his book.

Malachi O’Doherty claims that Gerry Adams is a millionaire. When asked to explain this, he said it was based on earnings from books and Westminster from when he was an MP. It is, however, widely known in the media (and by Malachi) that Sinn Féin MPs do not receive any salary from Westminster. And his books have not made him a million, either in Gerry’s or Malachi’s dreams.

Outrageously, the book repeats the claim from the RUC Special Branch that Pat Finucane was in the IRA and that he was shot instead of Adams. The author adds, without any evidence: “Finucane would take a bullet for Adams, or, in fact, 14.” This is what passes for insight by O’Doherty.

He references state collusion between unionist death squads and the British state only once and even then it is dismissed as “laxity” in the actions of the British forces.

The final section of the book deals with more contemporary issues that have been well-rehearsed and reads more like a cut-and-paste job from reports of the time.

Just as Malachi’s ‘credibility’ stems from being from west Belfast but not actually representing the views or experiences of many from that community, some of the contributors are former IRA Volunteers and ex-prisoners; some stayed with the Officials, all oppose Sinn Féin.

In common with each other, they are all proud of their contribution to the republican struggle and yet they contribute to a book that at its core is anti-republican and damning of their actions. Many of these contributors turn up endlessly on TV and in print. They have a parasitic relationship with Gerry Adams. Their views are afforded more prominence in the media over other republicans only because they are stridently critical of Sinn Féin and Gerry Adams in particular.

Reading this book is a waste of time.

If you are looking to this for an insightful and objective analysis of Gerry Adams, you might as well spend your time slapping yourself in the face with the Sunday Independent. It offers nothing new except an insight into the mind of Malachi O’Doherty. And that is not a good place to visit. 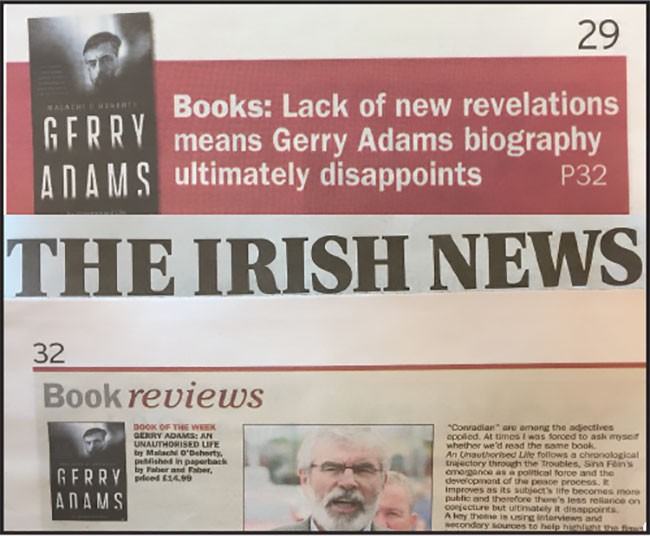 THE IRISH NEWS is no fan of republicans or Gerry Adams but even Political Correspondent John Manley was scathing about Malachi O’Doherty’s book on Gerry Adams.

The Sinn Féin leader’s “political career and personality warrant deep scrutiny, though too often the authors of such pieces are clouded by bias and a predetermined agenda”, John Manley said under the headline “Lack of new revelations means Gerry Adams biography ultimately disappoints”.

“This book isn’t a polemic though the author’s obvious contempt for and resentment of the Republican Movement and its methods are never far from the surface.

“And while it’s non-fiction, the early chapters rely heavily on O’Doherty’s imaginings and recollections of 1970s Belfast, alongside many of Gerry Adams’s own experiences, as recalled in his memoirs.

“The effect is to give the narrative a rather twee, concocted tone that jars, given that the expectation is for something much more sober and factual.

“Nevertheless, there are plenty of O’Doherty’s peers happy to be quoted on the jacket, telling us how significant its contents are. ‘Illuminating’, ‘judicious’ and even ‘Conradian’ are among the adjectives applied. At times I was forced to ask myself whether we’d read the same book.”

“Arguably, many may regard the book’s most startling revelation to be the author’s claim that ‘Gregory Campbell is both intelligent and funny’.”