British Army veterans march in London for immunity from prosecution 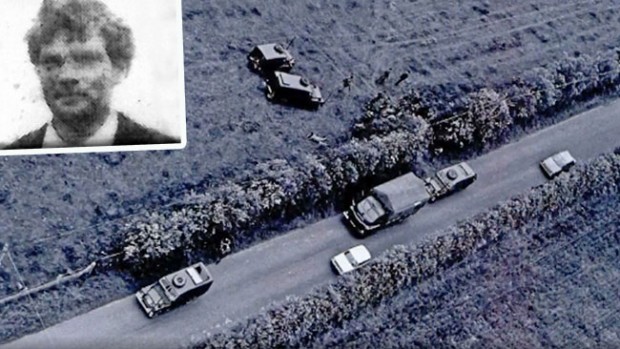 BRITISH ex-military personnel have marched in London to demand that Parliament give them immunity from prosecution for controversial killings and shootings during the conflict in the North of Ireland.

The ex-soldiers took to the streets on Saturday 16 September under the banner of “Justice for Northern Ireland Veterans” in support of Dennis Hutchings, a soldier who served with the Life Guards regiment charged with the attempted murder of an unarmed civilian in 1974, John Pat Cunningham.

John Pat was physically 27 years old but he was a vulnerable adult with a mental age of between 6 and 10. He had a fear of men in uniform. He was shot in the back while running away from a British Army unit on patrol.

The British Army were already well aware of John Pat’s condition, cruelly underscoring this in the Life Guards operations log by describing John Pat as the “village idiot”.

The local GP had also made representations to the British Army and the Royal Ulster Constabulary a year before John Pat was shot dead when the doctor had found him taking refuge in a ditch, terrified because British soldiers were about to arrest him.

As the British Army veterans marched in London (some throwing their medals at Parliament), supporters of John Pat’s family responded to a call from human rights NGOs the Pat Finucane Centre and Relatives for Justice and held vigils in Belfast, Derry and Strabane as well as London, where the ex-soldiers held their protest.

The most poignant gathering was by members of the Cunningham family, including John Pat's aunt and cousins, near the field on the Carrickaness Road, close to the Servite Priory in Benburb where John Pat worked as a farm labourer.

• Benburb: Members of the Cunningham family protested near where John Pat worked as a farm labourer

A Press Association journalist covering the events at Whitehall in London reported that some of the ex-soldiers had hurled abuse at the respectful vigil highlighting John Pat’s case, shouting “scum”. One British veteran ludicrously claimed that John Pat was shot “before he blew innocent people up”. (The Daily Mail continues to describe John Pat as “an IRA suspect”.)

Another speaker at the ex-soldiers’ protest, in an attempt to shift the blame and responsibility on to the Cunningham family, maintained:

“The whole area was cordoned off yet the family of John Pat Cunningham thought it was sensible to let a boy or a man with an age of 12 out on the streets.”

Paul O’Connor of the Pat Finucane Centre, who attended the demonstration in London, reminded observers:

“John Pat Cunningham is the victim in all this.”

The political campaign calling for immunity for British military personnel who served in the North has intensified since the soldier Hutchings was arrested and charged in 2015. It took on an added intensity when, in December 2016, two paratroopers were charged with killing Official IRA Volunteer Joe McCann in the Markets area of Belfast in 1972.

Demanding an end to the “witch-hunt” against British soldiers, the immunity campaign has been backed by the Fleet Street media as well as the Tories and various generals.

In the North, unionists of all shades attacked the Director of Public Prosecutions, Barra McGrory, over his decisions to level charges against armed forces personnel involved in controversial killings.

The tone of the debate in the Tory press can be summed up by Conservative MP Johnny Mercer, a former British Army officer. He told The Sun newspaper:

“This is a brand new witch-hunt as well as a total and complete betrayal by the Government of those who have done its bidding.”

“The dam is about to burst on our heroes.” 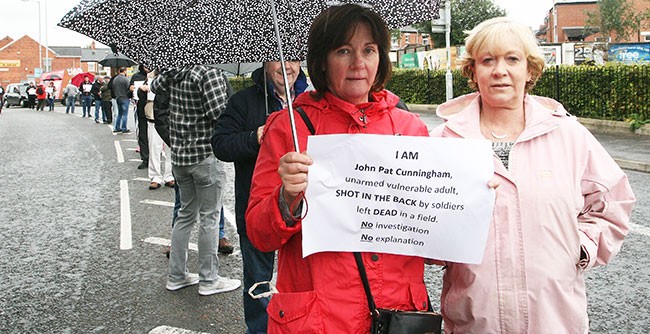