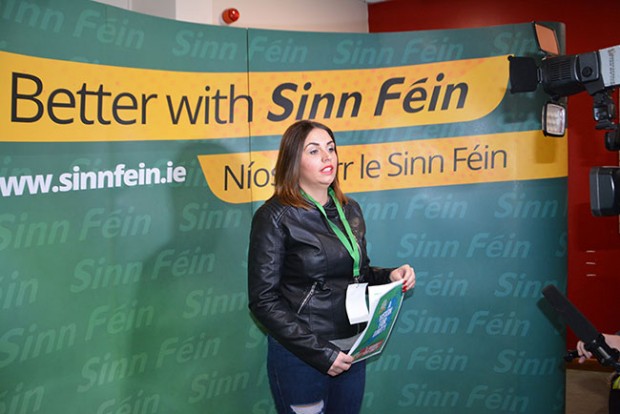 FOYLE Sinn Féin MP Elisha McCallion has called for an end to discrimination and urgent progress to be made towards a rights-based society.

Speaking at the Sinn Féin fringe meeting ‘Rights for All’ at the British Labour Party conference, Elisha McCallion said that rights are universal:

“Rights are for all. Sinn Féin is working towards a united and agreed Ireland with rights and equality at its core.

“Securing the human rights, language rights, and welfare rights of citizens is a stand that has been endorsed in historic numbers by the electorate in the North of Ireland.

“So this is the context in which Stormont talks continue to take place. Previous agreements and commitments must be implemented so that we build a rights-based society that delivers and protects all citizens.”

“Can anyone logically explain why a loving couple cannot marry in the North of Ireland when that right has been accepted across every other part of these islands?

“Why children being educated through the medium of Irish are being denied the same language rights as enjoyed by their peers in other parts of these islands?

“Or why some bereaved families have now been waiting over 40 years for inquests to be held?

“Our destination is a society that puts an end to the denial of these rights.”

The recently-elected MP for Foyle said that the time has come to “engage meaningfully” with the institutions of the Good Friday Agreement and to form an Executive again based on the principles of rights, parity of esteem and equality.

“And in this context,” she continued, “Sinn Féin wants to engage in a civic conversation, a debate and discussion on the benefits of Irish unity with rights at its core, which involves everyone and threatens no one.

“We are absolutely committed to seeing the political institutions re-established. We are determined to build on the legacy of Martin McGuinness.

“That is what success in the talks looks like – institutions founded on their original guiding principles of equality and mutual respect.

“This would be an important advance for citizens who want the parties to turn a corner and who want to see a significant step-change – new political era which looks to the future.”