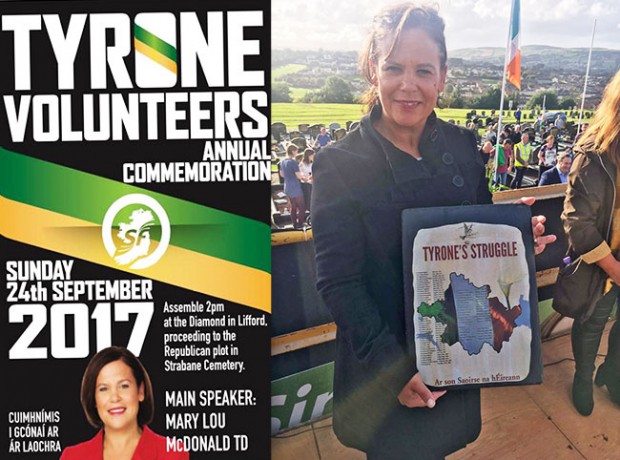 THE 2017 Tyrone Volunteers Commemoration was held in Strabane on Sunday 24 September after a parade across the Border from Lifford, emphasising the strong links between County Donegal and County Tyrone.

Mary Lou McDonald TD, Sinn Féin deputy leader, gave the main address, paying tribute to the sacrifice and commitment of republicans in the region and setting out Sinn Féin’s commitment to political institutions in the North that deliver in the manner and terms agreed since the Good Friday Agreement.

TODAY’S MARCH was significant as it crossed the bridge between Lifford and Strabane.

It highlighted the opaque rationale for an arbitrary line drawn on the map almost 100 years ago to serve only the interest of the few.

Partition has failed miserably yet, despite this failure, today’s commemoration demonstrates the close bonds of republicans North and South and their vision for a prosperous, diverse and united Ireland.

Cross-Border bonds between west Tyrone and Donegal are bonds of family, of community. They have not been broken by an artificial border. I think this unity is best symbolised by Pat Doherty’s political leadership and unrelenting humanity.

I look forward to the day when that fracture of partition is gone and replaced by a new and united Ireland.

The right to remember

Speaking at the graveside of our friend and leader Martin McGuinness, Gerry Adams said: “Martin did not go to war, the war came to him.”

This was true for Martin McGuinness.

It was true for the people of Derry

And it was true for the people of Tyrone, Strabane, Castlederg, Glenelly and east Donegal who we remember today.

After years of discrimination and repression, the people stood up for change. Their demands for fairness, equality and respect were met with the might of the unionist establishment and British military.

They brought the war to the towns and hillsides of Tyrone and a generation was left with no other option but to step forward.

Young lives who should have had the opportunities and hope afforded their peers in the South and in Britain.

And that is why we will never forget them.

They were a generation that fought so that no other generation would have too. We now have a peaceful pathway to progress.

Even in death, even after all of these years, there are those who seek to disrespect the loss of this community and the memory of our patriot dead.

They believe in a hierarchy and inequality. In a deserving and underserving dead. They believe that republicans should not be remembered. That you, after all you have endured, have no right to remember your family and friends.

Be in no doubt my friends: they are the minority barking from the sidelines with their mean-spirited revisionist position that flies in the face of what the majority of people voted for when they supported the Good Friday Agreement.

“It is recognised that victims have a right to remember as well as to contribute to a changed society.

“The right to remember.”

So be in no doubt: republicans have the same right as any other section of the community to remember our loved ones. Your pain is no less and no more than anyone else’s.

That was what previous generations of republicans fought for. That is what this generation is seeking to achieve.

A just and peaceful society not just for nationalists and republicans but for all who share this proud island.

That’s what Martin McGuinness dedicated his life to.

Bravely, selflessly and, when the time came, as a peacemaker and as a statesperson of international stature and enduring but principled tolerance.

Outreach, generosity and patience were his hallmark.  But when the barriers to the necessary progress became immovable he called time on the DUP. For the value of the institutions lies in their ability to deliver, to deliver in the manner and in the terms agreed in various agreements since 1998.  That is the Sinn Féin objective in the current talks – a reasonable and achievable objective.

And we are determined to secure it. There is little appetite at any level of society for another protracted round of political inertia. The issues are well known. They are rooted in equality, mutual respect and justice. And in agreements reached but not delivered on.

The rights of Irish-speakers to live their lives through the Irish language.

The rights of bereaved families to inquests after, in some cases, the denial of this for decades and more.

The right to marriage equality as enjoyed by citizens in Britain and the rest of Ireland.

The right to expect that the political institutions will play the role intended of them in progressing the peace and political processes.

That is the benchmark for Sinn Féin in these talks. 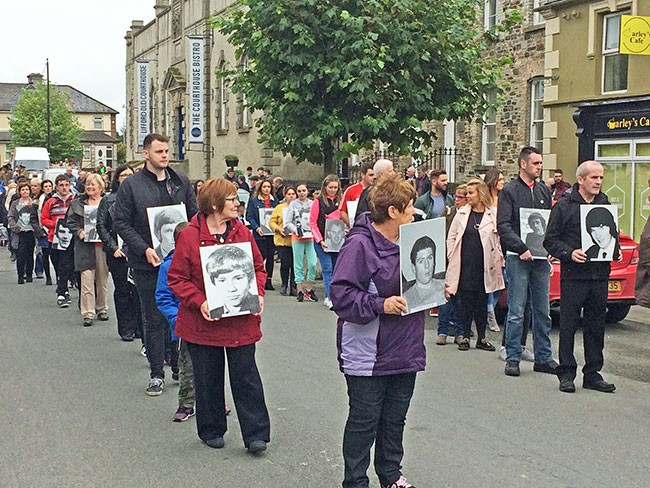 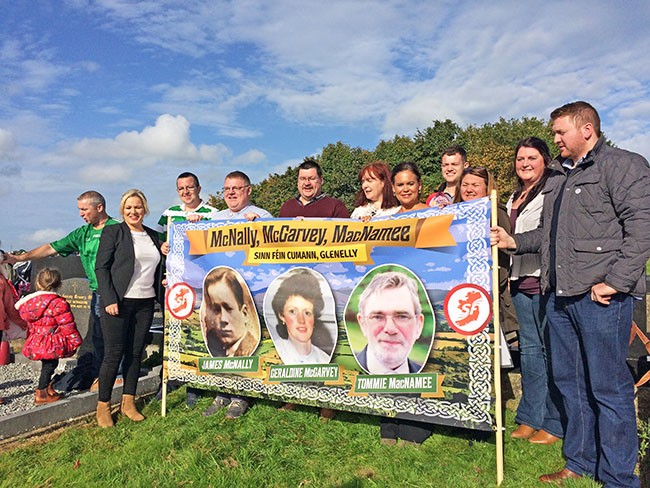 We want to end the segregation and separation. We hold no truck for sectarianism, sexism, racism or any other ‘ism’ that preserves inequality.

A just and peaceful society must be a reconciled society. The conflict was brutal as conflict is.

There were losses and hurt on all sides. We cannot and we will not shy away from that truth.

We must not only acknowledge the hurt endured by our community but also the hurt inflicted on others. That is the duty that falls on us all if we are to build a new and united Ireland.

There is a responsibility on us all to promote real reconciliation, to acknowledge, to reconcile and to heal.

As a society we must never forget the loss and we can never take our peace for granted.

But we must find a way to heal, to forgive and to reconcile. This is not the sole responsibility of republicans; it cannot be achieved by republicans alone. It cannot be a one-sided process.

We must have partners in the process. Unionism and the British Government must end their policy of prevarication, of inequality and the denial of rights.

They must honour previous agreements. They must seek to resolve the issues of the past and not refight them. The people are demanding more of all of us. Democracy must be respected and delivered on.

It’s time too for the leaders of Fianna Fáil and Fine Gael to stop using the North as political whipping stick as Sinn Féin grows in strength and support across the island.

It insults many of those left behind and fails to advance the cause of reconciliation, of progress.

Within a decade of centenaries marking partition, the Treaty, the Civil War and a violent birth of two states, political leaders of every hue owe it to all who have lived with the outcomes of the island’s history to embrace the challenges and opportunities ahead.

It is time now for a truly national discussion on reconciliation, on respect and on rights.

I want to be part of the discussion, where unionist leaders and the Irish and British governments sit down with us as equals, acknowledge the past and begin to chart a united and prosperous future for all peoples living on this island.

No one has anything to fear from reconciliation and our society has everything to gain.

So we leave here today, proud of the memory of those that came before. Grateful that the conflict has ended and a peaceful pathway to unity established.

Resolute in our resolve to bring about a just, prosperous and peaceful society for all.

That is the only fitting tribute to those we remember today, for all of those who lost their lives and as our legacy for future generations.