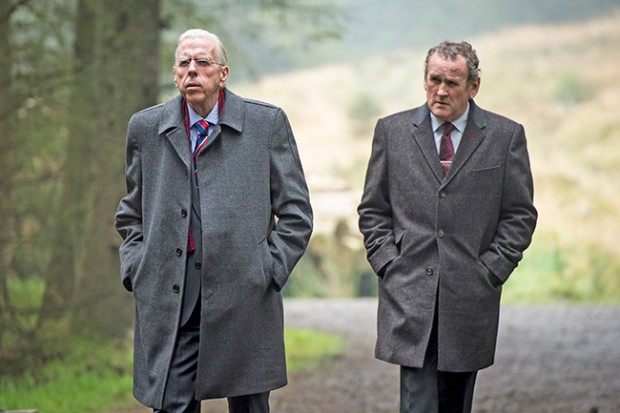 IT’S SAD to see what a truly pointless exercise this film eventually is when it had so much potential with two seasoned and talented actors playing two huge political characters in Ian Paisley and Martin McGuinness.

Colm Meaney does the best he can with the script as ‘Our Martin’ and Timothy Spall as Ian Paisley chimes with his public persona to those of us who didn’t know him as we did Martin.

The storyline, however, falls down on so many levels.

The title comes from a fictional car journey by the DUP and Sinn Féin leaders from St Andrews in Scotland to Edinburgh Airport. Crime novelist and screenwriter Colin Bateman (Murphy’s Law and Scúp) makes the obvious point that the growth of the relationship between the two men took a lot longer than 90 minutes but he argues he was writing for a foreign audience who would have little knowledge of Ireland, the recent conflict, or the two men.

The talks, at St Andrews in 2006, between the Irish and British governments, all the parties in the North – including Sinn Féin and the DUP – resulted in the St Andrews Agreement, the formation of a new Executive, restoration of the Assembly and (ultimately) Sinn Féin supporting a new beginning to policing. It was a bit more complicated than Paisley shaking hands with Martin McGuinness after a jaunt in the Scottish countryside.

The plot is that Paisley, mid-talks, wants to go home for the night to celebrate his 50th wedding anniversary. When the Sinn Féin delegation is told of this, Martin decides to go with him. This much is true, but while the two men were on the same flight home, they were not alone and they travelled to the airport in separate cars. 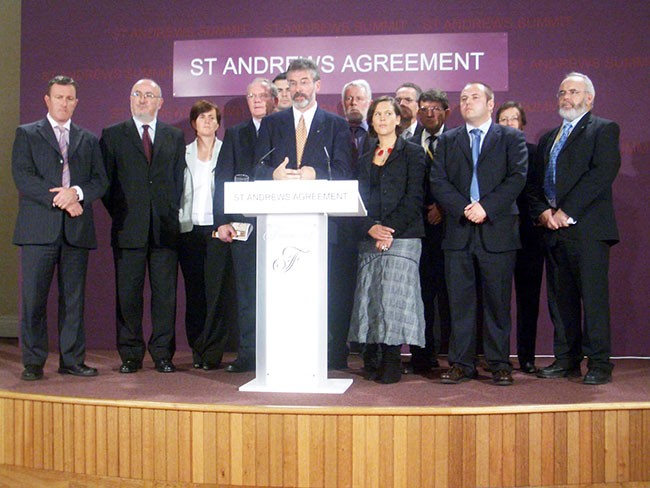 • Sinn Féin in the real drama of the St Andrews Agreement

The film suggests that the stalled talks would be saved if the relationship between the two men softened during the journey. So British Intelligence bug the car and we are asked to believe that Tony Blair, Bertie Ahern, sundry British civil servants and Gerry Adams (!) all stand around a monitor together watching and listening to them as the journey progresses. It stretches fiction to ludicrous.

As the movie journey nears its end, the watching Brits agree that they need more time, so the Special Branch driver, who begins the journey by feigning ignorance of who he has in his car (really?), is told to divert from the main road and lose the security detail.

There follows a cringe-fest where they walk in the woods, come upon a dying deer which Martin goes to put out of its misery before deciding not to, explore a derelict church (which conveniently provides a pulpit for Free Presbyterian preacher Dr Paisley) and wander in a graveyard while expressing the most trite beliefs about Ireland, their politics and the conflict.

The final moments, when the handshake takes place, has each man saying they despise everything for which the other stands. The unspoken suggestion is that, despite that, they will work together.

I saw the film in the Irish Film Institute with a Q&A with the screenwriter, Colin Bateman. He had met Martin in the Bogside during the creation of the script and confided to the IFI audience that he was aware he was entering “enemy territory” and had to think about if he would shake hands with Martin when introduced. He did.

If this was the starting point of the script, it could have been worse but since very little of the storyline bears any relationship to the truth (except that the men concerned did, indeed, form a friendship and were able to work together at a very significant moment in history), there is – regrettably – really no point to it at all.

Wait until it appears on Netflix or turns up on television to see what you think. 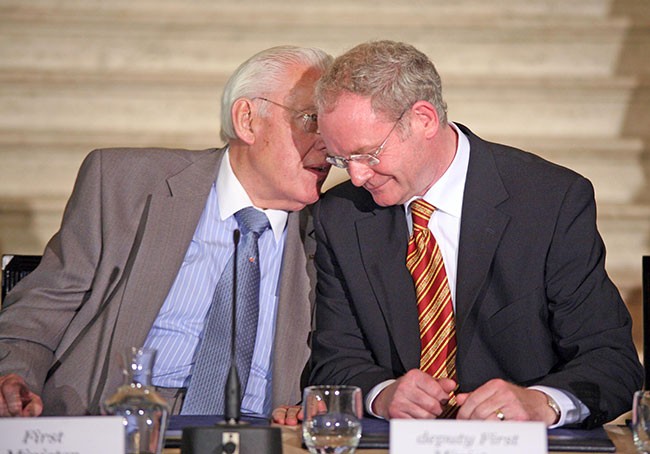