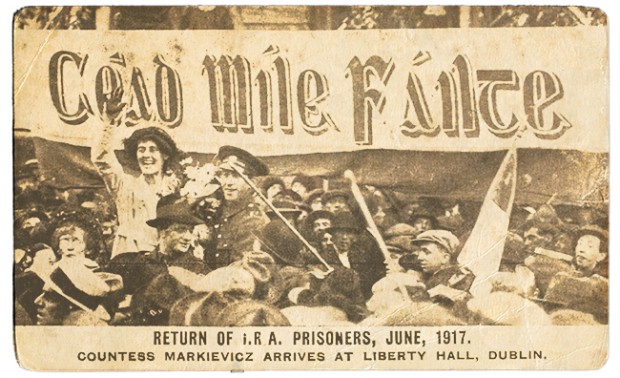 BY JUNE 1917, the most senior woman officer of the Irish Republican Army in 1916, Constance Gore Booth, Countess Markievicz, known to close friends and family as “Con”, had been in British custody for over a year. She was held in the Women’s Prison in Aylesbury, a town to the north-west of London, between Oxford and Luton.

Markievicz’s prison number was 12, prompting her to sign herself ironically “Con(vict) 12” when writing to her sister Eva. As the only remaining Irish republican female prisoner in England, she was deprived of any association with fellow political prisoners.

Conditions for the women in Aylesbury were atrocious.

Con described the prison as filthy, crawling with lice and other bugs, with appalling food, served in dirty dishes and in meagre portions so that the prisoners were constantly hungry. While she and her supporters on the outside demanded political treatment for her, and segregation from criminals, Con had sympathy for her fellow prisoners. Many were young women with mental health problems who were prone to what would now be called self-harm and there were several suicide attempts during Con’s time in Aylesbury.

Con was very close to her sister Eva who dedicated a poem to her and the executed 1916 leaders:

And my own sister, through wild hours of pain,

Whilst murderous bombs were blotting out the stars

Little I thought to see you smile again

As I did yesterday through prison bars.

While physically divided from her comrades, Con had growing support in Ireland. In August 1916, she had been elected President of Cumann na mBan. The Irishwomen’s International League petitioned the British Home Secretary on her behalf in February 1917. More and more public attention was focused on the plight of the Irish political prisoners.

At the start of June 1917, hundreds of Irish prisoners were still in jails in England. Most of these had been moved to Lewes Prison, near Brighton on the south coast of England, at Christmas 1916. Among them were the two most senior surviving commandants from the Rising, Eamon de Valera and Thomas Ashe. Both their commands had inflicted heavy casualties on the British Army in Easter Week but they escaped the firing squad because, after the executions of Seán Mac Diarmada and James Connolly on 12 May, the British Government concluded that further executions would be politically counter-productive, especially in the USA.

US opinion was increasingly important in British imperial policy.

In April 1917, the US joined Britain and France in the war against Germany but it would be months before significant numbers of US troops were deployed to Europe and the British wanted to ensure the maximum commitment.

The election of Joe McGuinness, another Lewes prisoner, as MP for South Longford, increased the pressure.

Inside and outside the prisons, agitation grew. The Lewes prisoners commenced a no-work strike at the end of May, with de Valera moved to Parkhurst Jail as punishment.

Still with an eye to US opinion, at the end of May the British Government announced that an Irish Convention would be established. Its membership, agenda and outcome were set by the British who made clear that the future government of all Ireland would be within the Empire, Lloyd George already having promised the unionists that partition would be implemented. Sinn Féin refused to participate unless there was an open agenda with the right to recommend independence and that political status was given to Irish prisoners in Lewes and Aylesbury. These demands were refused and both Sinn Féin and Labour boycotted the Convention. 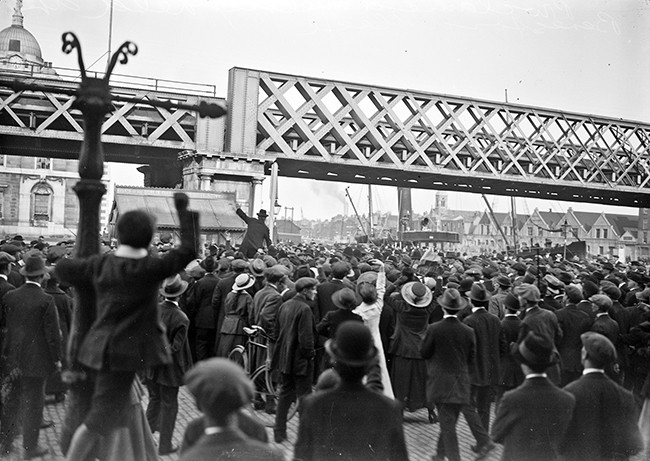 • Dublin Metropolitan Police clash with the crowd as the police move in to arrest Cathal Brugha and Count Plunkett on 10 June 1917 at Beresford Place, beside Liberty Hall in Dublin

On 10 June, at Beresford Place, beside Liberty Hall in Dublin, a protest meeting was held, demanding political status for Irish prisoners. It was addressed by Cathal Brugha and Count Plunkett, victor in the North Roscommon by-election. The British authorities banned the meeting and arrested Plunkett and Brugha. Amid clashes between the crowd and the police, Dublin Metropolitan Police Inspector Mills died after he was struck on the head with a hurley.

On 15 June 1917, in the House of Commons in London, Coalition Cabinet member Andrew Bonar Law, leader of the Tories, announced a general amnesty for all prisoners “now in confinement in connection with the rebellion of 1916”. He linked the releases directly to the Irish Convention.

The prisoners arrived by boat in Dún Laoghaire on 17 June and were greeted at Westland Row (now Pearse) railway station by many thousands of cheering people waving Tricolours.

The streets were thronged as the prisoners were carried in triumph and receptions for them were held all over the country.

Addressing the crowds in Cork, released prisoner Diarmuid Lynch said he was glad to return to “a rebel Cork, a republican Cork and an Irish Cork”.

‘Con(vict) 12’ arrived in Ireland the next day, 18 June, and received an equally tumultuous welcome in Dublin. Waiting for her was her comrade Dr Kathleen Lynn with her car – the same one she had used in Easter Week. Con greeted the crowds from the open car and the Irish Citizen Army led a parade through the streets to Liberty Hall.

While the British Cabinet thought the Convention and the releases would win them political credit, the tumultuous welcome given to the prisoners when they returned to Ireland demonstrated that “all had changed, changed utterly”.

The general amnesty took effect in June 1917, 100 years ago this month.