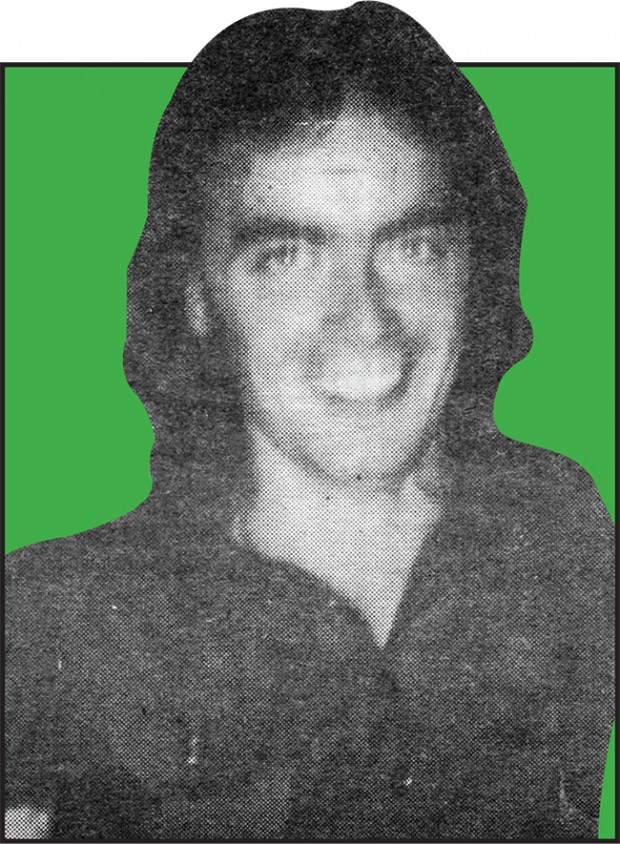 RA VOLUNTEER Brendan O’Callaghan was shot dead by British soldiers lying in ambush on 23 April 1977 in the car park of The Hunting Lodge bar on Belfast’s Stewartstown Road.

British troops, dug in at the rear of the premises, opened fire on two IRA Volunteers who, they claimed, were cocking a pistol. Brendan (21) was hit by two rounds and died of his wounds. The other Volunteer was uninjured and evaded arrest.

As Brendan lay mortally wounded, the British soldiers broke cover and ordered customers back into the premises as they attempted to apprehend the dying Volunteer’s comrades.

Eyewitnesses were clear that the troops were in uniform but were heavily disguised and with their faces blackened, indicating that they were involved in a surveillance operation at the popular bar.

The IRA confirmed in a statement that the father of two from the Lenadoon area was a Volunteer on active service as part of a three-member unit “designed to protect republican areas after recent bombings and shootings carried out by British and loyalist elements”.

The story behind Volunteer Brendan O’Callaghan’s killing reveals so much about the Belfast of 1977, in particular, the so-called ‘Dirty War’ and the counter-insurgency tactics deployed by British Military Intelligence and the British Establishment at Westminster and Whitehall. The cold strategy was to undermine nationalist communities by fomenting sectarianism, with the ultimate objective being the military defeat by the British state of the IRA.

It is also a story that sheds light on the evolving intelligence strategies that British Military Intelligence, RUC Special Branch and MI5 were developing as the nature of the war changed.

These were the years that saw the British introduce their three-pronged strategy of “Ulsterisation, Normalisation and Criminalisation” with the intention of framing the context of the conflict at home and across the world as an internal ‘law and order’ issue for Britain rather than a political struggle.

“Ulsterisation” led to many English, Welsh and Scottish troops being taken off the frontline and replaced with a highly-militarised RUC and Ulster Defence Regiment soldiers.

“Criminalisation”, both in political and propaganda terms, was pumping out the lie that the IRA was a mafia-type gang rather than a politically-motivated guerrilla army, a People's Army. 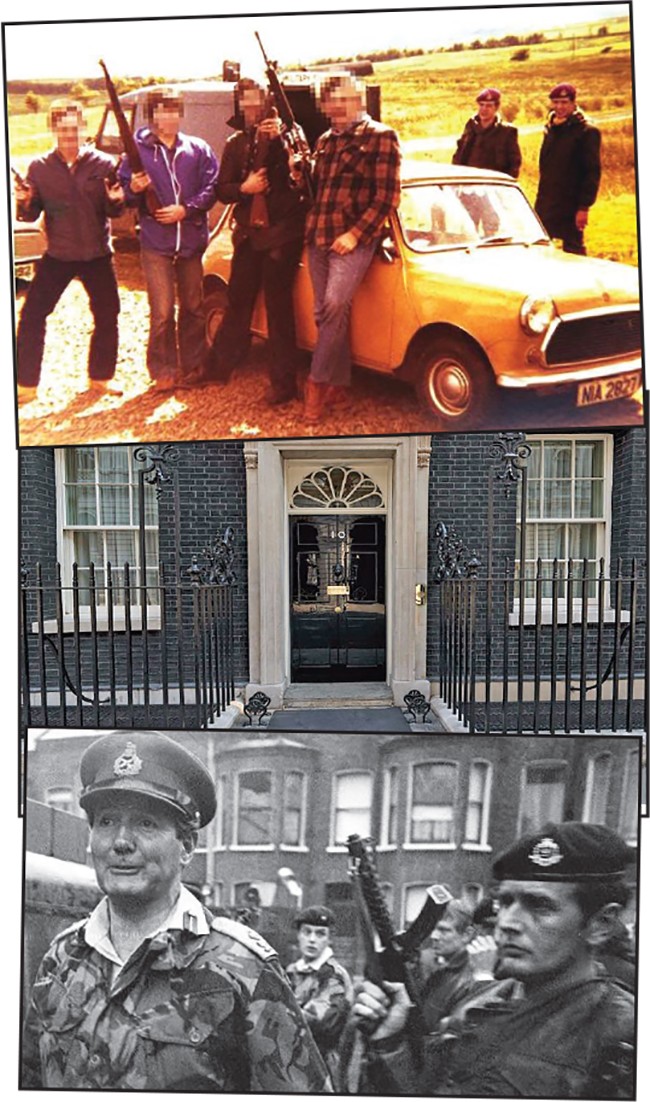 Within the newly-built H-Blocks of Long Kesh, captured republicans who had previously won the right to be treated as political prisoners were to be subjected to a regime geared to break their political will and psychological resolve.

On the day he was killed, Brendan O’Callaghan and other IRA Volunteers had gone to the Hunting Lodge bar to arrest people suspected of acting as British agents provocateurs. The British soldiers hidden behind the building claimed they saw the Volunteers with a handgun and opened fire.

Why British troops would be staking out the bar and keeping it under surveillance is open to conjecture but the Hunting Lodge was one of three local bars targeted in bomb attacks around that time. One of the attacks, on the White Fort on the Andersonstown Road in July 1976, left three men dead.

While the media were understandably describing the bombings as sectarian attacks and laying the blame for the explosions on unionists (in the case of the White Fort attack, going as far to identify the culprits as members of the Ulster Volunteer Force), republicans were looking closer to home.

The IRA was sure that the British Army was recruiting people from the nationalist community, training them in the use of explosives and weapons, and directing them to carry out attacks on targets within nationalist areas. 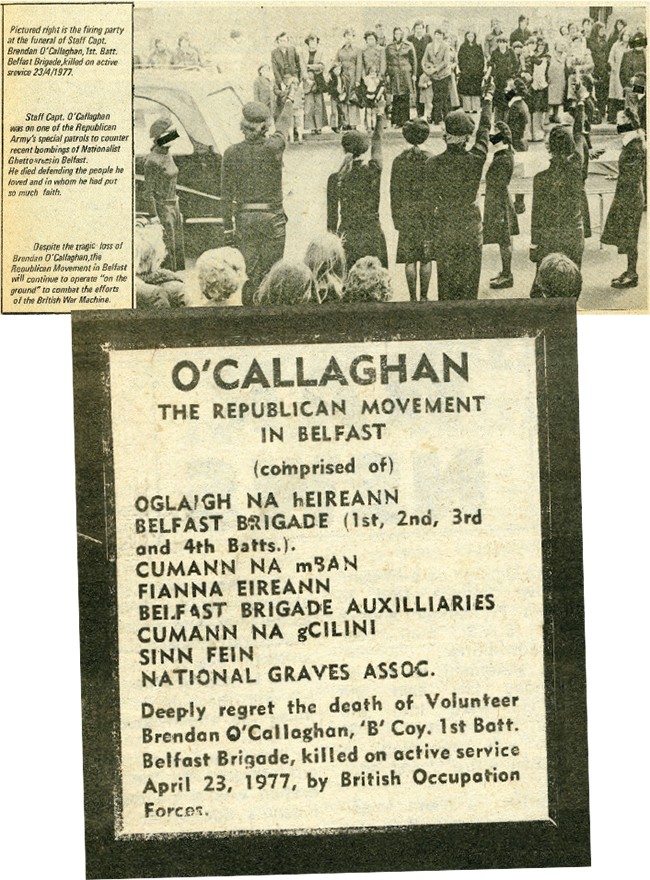 An Phoblacht has spoken to senior republican sources who described that period from 1976, in the aftermath of the disastrous 1975 truce as “a very critical phase of the struggle”.

The British had used the truce to undermine the struggle and were pushing forward with the criminalisation policy.

But it was their day-to-day counter-insurgency tactics and their increased use of agents provocateurs, particularly in Belfast, that underpinned Britain’s military intentions and pointed to the ever-increasing and important role of the British Intelligence services (British Military Intelligence and MI5, the Security Service) in the conflict.

In the early 1970s, Britain’s crude attempts to fan sectarianism in its gerrymandered statelet centred on the Military Reaction Force (MRF), a death squad made up of 40 hand-picked members of the British Army who operated from 1971 to 1973 under the command of a brigadier.

Its genesis was in the counter-insurgency doctrine of Brigadier Frank Kitson, developed particularly from his colonial experiences in Kenya and Malaya.

The MRF was officially tasked with targeting IRA activists but its “elite” members almost dismissively admitted in a BBC TV Panorama investigation broadcast in December 2013 that the MRF carried out ‘drive-by’ shootings of nationalists. These included people keeping watch at barricades to protect their homes from loyalist sectarian gangs in the years after unionist mobs and the RUC launched pogroms against nationalist areas, razing entire neighbourhoods such as Bombay Street to the ground.

Among those killed in a series of shootings across Belfast in 1972 were Patrick McVeigh, who was killed at a barricade in west Belfast while four others were wounded. Also killed, in the St James's area, was Daniel Rooney. His friend, Brendan Brennan, was wounded.

In June 1972, Jean Smyth, a 24-year-old mother of one, was shot by the MRF as she sat in a car on the Glen Road but the RUC told her family that she was shot by the IRA because they mistook her car for an undercover British Army vehicle.

According to republican sources, British Military Intelligence remodelled the MRF in the wake of it being exposed as being responsible for the killing and wounding of numerous nationalist civilians in its quest to fuel sectarianism.

Added to the political pressure for disbanding or reconfiguring the unit was the success the IRA had in identifying and attacking MRF commercial business fronts. These included the Four Square Laundry operating in west Belfast, a massage parlour on the Antrim Road in north Belfast, and an office in Belfast City Centre.

The British Army acknowledged that one soldier (Ted Stuart) was killed in the attack on a Four Square Laundry van in Twinbrook. The IRA maintained they killed a further two undercover military agents secreted in a roof compartment of the laundry van and three operatives in the massage parlour.

The MRF, reported to be reconstituted as the Special Reconnaissance Unit (SRU), was to rely on mostly nationalist civilians or, in some cases, IRA Volunteers who had been ‘turned’ by the enemy. 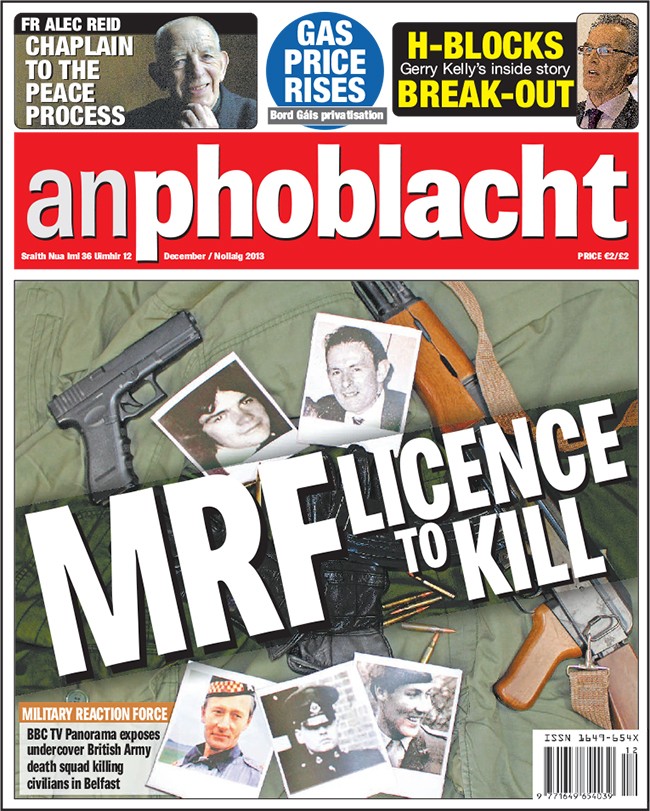 The IRA began to unravel the new modus operandi when two of these agents provocateurs (dubbed “Freds” by British Military Intelligence), Vinty Hetherington and Myles McGrogan, neither of whom was a member of the IRA, were arrested and charged by the RUC over the killing of two RUC officers in Finaghy on the outskirts of west Belfast.

The charges were later dropped but, while on remand, Hetherington eventually admitted under questioning by the IRA to being an agent.

He disclosed that he and other members of the group were based in Palace Barracks, Holywood. He revealed they were supplied with money and women and had been taken away for training in England, where they were quartered in a large country house in Essex.

There they were given weapons, explosives and anti-interrogation training and sent back to the North.

As well as confessing his activities, Hetherington named a number of IRA Volunteers as “Freds”, something he would he would later admit was disinformation. According to An Phoblacht's sources, this was a deliberate strategy designed to create confusion and paranoia as it was linked to an alleged plot to poison republican prisoners being held on remand in Crumlin Road Jail.

Campaigner and author Margaret Urwin (in her paper Counter-Gangs: A History of Undercover Military Units in Northern Ireland 1971-1976, written for Spinwatch and the Pat Finucane Centre) said that a third MRF agent, Seamus O’Brien, was alleged to have been involved in a bomb attack on the Strand Bar, in the small nationalist east Belfast enclave of Short Strand on 12 April 1975. Six people, four of them women, were killed. The women and one man died instantly; the sixth victim, a second man, died a week later.

An Phoblacht’s source told us that O’Brien, who had connections to the emerging Irish National Liberation Army, met his British military handlers in houses in west Belfast where, as well being debriefed, he received training and instructions on the use of firearms and explosives.

O’Brien, who was executed by the IRA in January 1976, was linked to attacks on three popular west Belfast bars – The White Fort, The Glenowen and The Hunting Lodge, where Volunteer Brendan O’Callaghan would be killed in 1977.

Even with its success in neutralising this MRF/SRU unit, the IRA was only too aware that the intelligence war would intensify.

• Volunteer Brendan O'Callaghan's sister Pauline with her daughter Danielle and her children along with Brendan's other sister, Michelle

UPWARDS OF 200 republicans from across Belfast gathered in the grounds of the Roddy McCorley Society on Sunday 23 April, the 40th anniversary of Brendan O’Callaghan’s death on active service.

They heard numerous speakers pay respects to a man whose qualities as a husband, a father, a brother, a soldier, a comrade, a friend and a leader set him out as someone with special gifts who was a loss to his family, his community and the struggle.

Chaired by Sinn Féin’s Alex Maskey, the main speaker at the event was Brendan’s sister, Pauline, who described her brother’s life and experience growing up in war-torn Belfast and how it influenced his decision to join the IRA and fight back.

“When we hear IRA Volunteers referred to as a ‘terrorists’, ‘thugs’ or ‘non-worthy’ victims of the conflict it pierces our hearts,” Pauline said. “Had Brendan worn the uniform of the state, he would have been labelled a hero.

“We will not accept a narrative of his life that undermines him or his character – he will not be lambasted by those who seek to secure only their version of the conflict.

“Brendan was not born an IRA Volunteer – he was, like so many, created an IRA activist.”

Among others speakers who stepped up to praise Brendan for his courage and friendship were comrades, such as former POWs and Blanketmen Jim ‘Jaz’ McCann and Seamus Finucane, Sinéad Moore (who was on protest in Armagh Women’s Prison), and senior republican Bobby Storey.

• The crowd listens as Jim 'Jaz' McCann recalls his fallen comrade, his friendship and his courage