Probably the most important election of a lifetime

Westminster campaign counts down to voting on 8 June 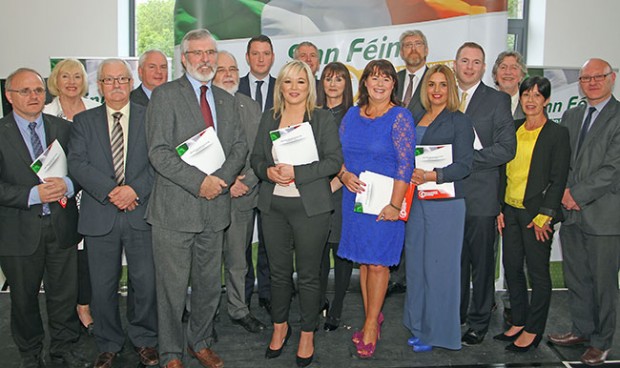 ‘We must keep the momentum going, make our voices heard and our anger felt by the spineless British Tory Government in London’

THE Westminster election is just weeks away and campaigning is well underway across the North as Sinn Féin looks to get the highest number of votes possible.

As expected, given the timing and motivation of British Prime Minister Theresa May in calling the election, Brexit has been the main theme of campaigning.

While Theresa May, the Tories and their DUP unionist allies are seeking a mandate to push through their Brexit agenda, Sinn Féin has made it clear to voters that this election is an opportunity to send a message against Brexit, against Tory cuts and for Irish unity.

The election campaign may have been slower to start in the North than in Britain but there is no doubt that it is now in full flight with posters on lamp-posts in cities, towns and villages across the North and canvass teams knocking on doors, seeking the all-important votes.

The issue of electoral pacts dominated the early stages of the campaign as the possibility of unionist pacts was the main topic of discussion.

Given the historic election performance of Sinn Féin in the Assembly election in March and the ending of the unionist majority at Stormont for the first time since partition, attention turned to whether the DUP and Ulster Unionist Party would stand aside for each other or field agreed candidates in key constituencies to prevent Sinn Féin winning more seats.

Despite the fact that no formal pact was agreed between the unionist parties, the UUP unilaterally agreed not to stand candidates in West Belfast, Foyle and North Belfast.

Sinn Féin entered into discussions with the SDLP, Green Party, Alliance and others about the possibility of securing arrangements which would allow the anti-Brexit, pro-equality vote to be maximised in constituencies but no agreement could be reached.

Following the announcement by Sinn Féin that John Finucane, son of murdered Belfast human rights lawyer Pat Finucane, would be the party’s candidate in North Belfast, Sinn Féin called on the SDLP to stand aside in the constituency, as well as in Fermanagh & South Tyrone, where Michelle Gildernew is the only serious challenger to sitting Ulster Unionist MP Tom Elliott. 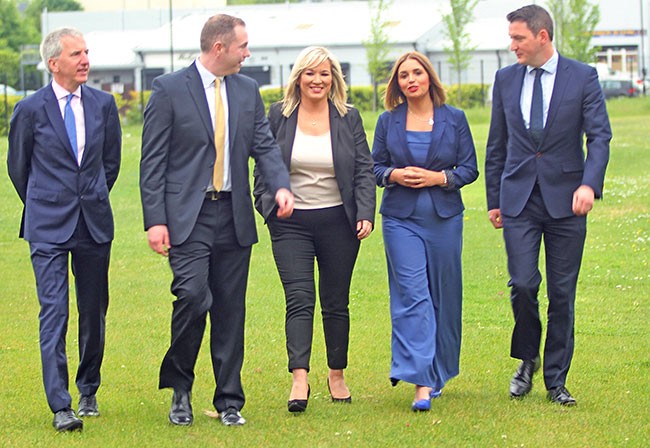 The Sinn Féin party leader in the North, Michelle O’Neill, reaffirmed that Sinn Féin is the only anti-Brexit, pro-equality party capable of winning those seats but her call was rejected by the SDLP, who put forward low-profile spoiler candidates in each constituency who may cost valuable votes.

During the Assembly election campaign earlier this year, DUP leader Arlene Foster breathed life into the election when she made her now-infamous “crocodile” comments, angering nationalists and republicans and driving more and more people to polling stations.

The DUP leader would have been well advised to stay away from the media during this campaign given her performance in the last but she clearly did not take any notice and she has weighed in with some more controversy this time around.

In what should have been a soft-focus profile piece in the anti-republican Sunday Independent in Dublin, Arlene Foster managed to embroil herself in an almighty sexism row when she used the word ‘blonde’ to describe Michelle O’Neill.

Her attempts to get herself out of the mess by claiming she was being complimentary only served to draw more attention to the original remarks and reignite the debate around ‘everyday sexism’ and arrogance in public life.

SDLP leader Colum Eastwood followed Arlene Foster’s ill-advised media style when he needlessly plunged himself and the SDLP into another controversy when the DUP leader said she was concerned about the increase in the number of people applying for postal and proxy votes (a mechanism encouraged on social media by the House of Commons itself!).

Seemingly oblivious of the fact that Brexit and continued DUP arrogance has resonated with voters, instead Colum Eastwood appeared to suggest that something untoward was happening and that the SDLP were not “orchestrating” it.

Those comments did not go down well with the wider nationalist community, however, particularly in areas such as Derry where memories of unionist gerrymandering are still fresh in many memories of the Civil Rights struggle during unionist domination. 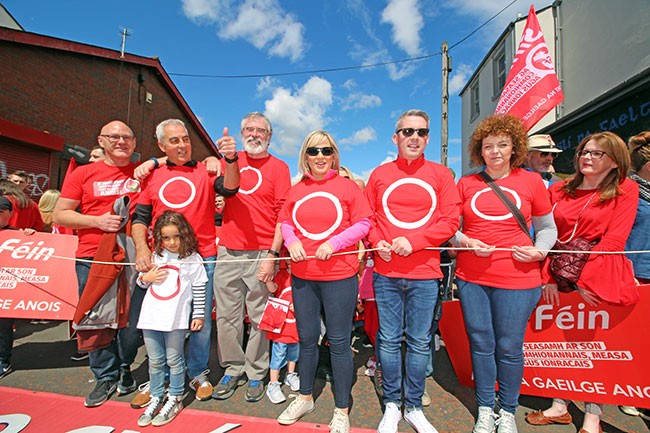 While Brexit dominates the political landscape, issues around rights and respect are also major electoral issues, particularly around the Irish language.

On Saturday 20 May, tens of thousands, including large numbers of young people, took to the streets of Belfast in a colourful demonstration through the city centre to add their voices to calls for an Irish Language Act.

Sinn Féin representatives once more  joined the protesters and were featured prominently in the news coverage.

As the campaign moved into its final phase, Sinn Féin launched its manifesto in Dungannon, in the key election battleground of Fermanagh & South Tyrone, where Michelle Gildernew is hoping to win back the historic seat from Ulster Unionist Tom Elliott, a former soldier in the Ulster Defence Regiment.

At the manifesto launch, Michelle O’Neill made it clear that this election is the most important for a lifetime and that the political stakes have never been higher.

She was joined at the launch by fellow Sinn Féin candidates Chris Hazzard MLA (South Down) and Elisha McCallion MLA (Foyle), who explained the content of the manifesto to the media.

Sinn Féin’s case for the North to have ‘Designated Special Status Within the EU’ features prominently in the manifesto.

Speaking at the launch, Michelle O’Neill called on people to use the election to send a clear message to Theresa May’s Tories at Westminster and the DUP that they are opposed to Brexit.

Outlining the importance of each and every vote at this election, Michelle O’Neill said:

“Often we say when an election occurs that this one is really the most critical. But we honestly cannot understate the huge importance of this one.

“The political stakes are high. This is probably the most important election of a lifetime.”

The Sinn Féin leader in the North also said it affords people an opportunity to reject the Brexit agenda of the Tories and their allies in the DUP.

“This election is also of such importance because it was called by British Prime Minister Theresa May in the narrow self-interests of the Tory Party who have no regard whatsoever for the people of the North, our interests or our future – and who are intent on dragging us out of the EU despite the fact that the majority of the people here voted to 'Remain' in June of last year.

“So, this is very much an opportunity to tell both the Tories and the DUP again – in the strongest possible terms – that we reject Brexit; reject the Border; reject any attempt to put limits on our freedom of movement; reject barriers to agriculture and trade.

“And that we absolutely reject Tory cuts.

“That what we stand for is rights, equality and Irish unity.”

Michelle O’Neill said the election is part of a political fighback against Brexit, the Tory cuts agenda and the arrogance of the DUP.

“The recent Assembly election has activated a transformation unimaginable to the founders of the Northern state.

“We must keep the momentum going and to make our voices heard and our anger felt by the spineless British Tory Government in London.” 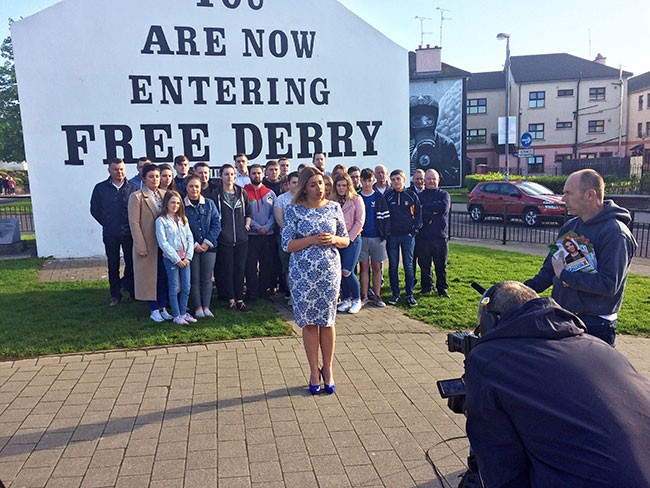 She also told voters that Brexit and the continued growth of Sinn Féin has created a new political arena in Ireland.

“I have no doubt that this will be another ground-breaking election for Sinn Féin.

“The old certainties are gone and a new political era is opening up in Irish politics.

“Brexit and Tory cuts demonstrate the undemocratic nature of partition.

“Westminster should not be allowed to dictate our political future.

“So we must not let them.

“Irish unity is now firmly on the agenda and rights and equality have been put centre-stage of the political process.

“The choice for voters is clear – vote for parties that will sit on the side of the Tories and their cuts and for Brexit or with us in Sinn Féin to safeguard their  rights, agreements, prosperity and our future in the EU with the rest of Ireland and who are anti-Brexit.”