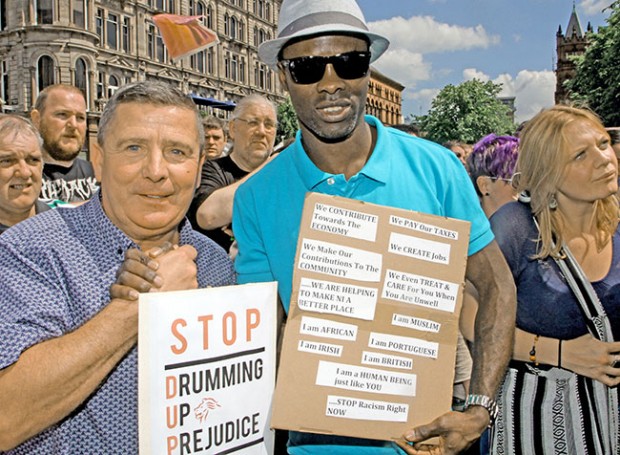 In the past four years, there’s been an 87% increase in race hate crime

IN JUNE 2014 the Office of the First and deputy First Ministers (OFM/DFM), then occupied by Peter Robinson and Martin McGuinness, put the Executive’s new Racial Equality Strategy out for consultation.

The proposals were developed with minority ethnic representative groups and representatives of the wider community through the OFM/DFM’s Racial Equality Panel.

The indicators take into account the shared aims and objectives of the forthcoming Racial Equality Strategy and measure progress under a set of four key strategic priorities:

“The strategy also sets out how departments will work in partnership with others in pursuit of the strategic aims. We believe that the proposals in the document, which aim to promote racial equality and tackle racism, will help to raise awareness of the issues and responsibilities in this area. They will foster good relations and thus promote greater social cohesion and equality of opportunity for everyone here.” 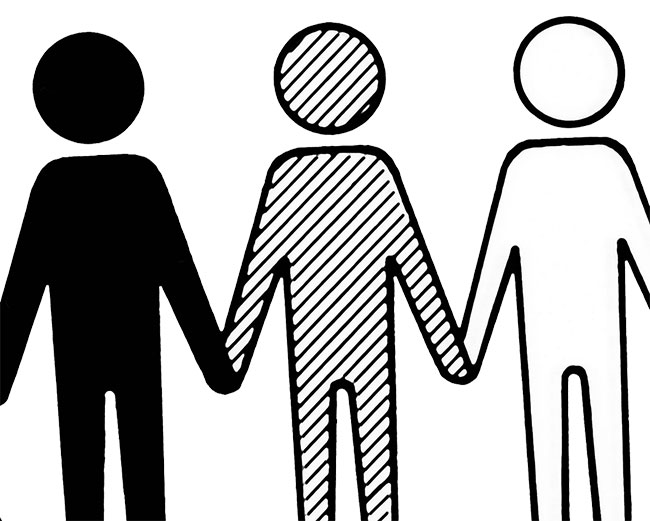 RACISM was thrust back into the headlines when former Alliance Party MLA Anna Lo publicly branded the North’s largest party, Arlene Foster’s Democratic Unionist Party, as “the most racist party in Northern Ireland”. Figures show that as many as three racist incidents per day are reported in the North.

The PSNI in August reveal the staggering number of race crimes – 1,133, occurred in the 12 months up to 12 June this year.

In an Assembly debate on 11 October, calling for the implementation of the Racial Equality Strategy and the Together: Building a United Community Strategy, Sinn Féin Fermanagh/South Tyrone Assembly member Seán Lynch stated that, in the past four years, there’s been an 87% increase in race hate crime.

Lynch’s Private Member’s debate calling for the Executive to implement the Racial Equality Strategy comes after a two-year delay arising from the refusal of the then DUP leader, Peter Robinson, to sign off on the draft agreement despite Sinn Féin ministers in the Executive, led by Martin McGuinness, having done so.

In an interview with the Belfast Telegraph on 24 October, Anna Lo (born in Hong Kong, of Cantonese-Chinese ethnicity, who retired from the Assembly prior to this year’s elections), said of the DUP:

“Over the years, many of their councillors and MLAs have made negative comments about ethnic minorities. Plenty of times they haven’t condemned racist incidents in their areas.”

“Sectarianism and racism are two sides of the one coin. If people have always been sectarian it’s very easy for them to be racist.”

The DUP dismissed Lo’s comments as “puerile and unfounded” but one DUP-supporting blogger tweeted: “I think it might be time to go home, Anna.” Anna Lo has lived in Belfast longer than her antagonist has.

This casual attitude to racism was illustrated when DUP East Antrim MP Sammy Wilson was recorded by the BBC during a walkabout in Carrickfergus in March about EU membership ahead of the “Brexit” referendum on 23 June. A man Wilson spoke to volunteered: “I’d say get out of it. Between you and me get the ethnics out too.” The DUP MP replied: “You are absolutely right, you know.” Wilson later claimed he was agreeing only with the first statement and not the latter about “ethnics” although he did not make this clear at the time.

It seemed to fit in with a trend in the DUP, even amongst senior figures speaking publicly.

Two years ago, then DUP leader and First Minister Peter Robinson felt he had to make a personal visit to Belfast’s Islamic Centre to apologise in person when he appeared to endorse fundamentalist Christian preacher Pastor James McConnell, who had denounced Islam as evil and satanic.

“It is a duty of any Christian preacher to denounce or demonise false doctrine. He's perfectly entitled to do that,” the DUP leader declared, adding:

“However, as I have said in many of the normal daily activities of life, I would have no difficulty in trusting Muslims to go down to the shop for me, to give me the right change . . .”

Gregory Campbell, DUP MP for East Derry, made insulting comments about the Irish language and Irish speakers in his address to the party’s annual conference in 2015.

South Antrim DUP MLA Paul Girvan said to a colleague at a Stormont committee meeting last December that scrap metal dealers should be armed with guns to protect themselves from “gypsies”. (Girvan had previously said he had no problem with Irish Tricolours being burned on loyalist bonfires.)

DUP East Derry MLA Adrian McQuillan posted on Facebook a warning to people to make sure their homes were locked up after Travellers moved onto a site in Garvagh in April.

In September, former DUP Councillor Jenny Palmer (who has defected to the Ulster Unionists) was at the centre of a race controversy when she responded to a jibe on Facebook about housing refugees by saying: “I have two dogs, don’t need any more. Lol.” Mike Nesbitt’s new recruit later apologised and deleted the post, claiming that her “careless words . . . were intended as a joking remark regarding the busyness of my own home – that between myself, my husband, our dogs and my daughter, we would struggle to accommodate anyone else”.

Jenny Palmer’s ‘dog whistle racism’, the public propagation – not just tolerance – of coded or casual racism by ‘respectable’ political figures who are supposed to be leaders in their communities, gives tacit approval to bigotry and to physical attacks on the streets against people of colour or different ethnic backgrounds.

In September, Belfast’s Islamic Centre was again the target of a paint-bomb attack.

The following month, in Antrim town, a young Romanian mother was attacked with stones by young school students who filmed their taunting of her on their camera phones as they jeered:

“You’re not a girl; you’re an immigrant. You shouldn’t be in this country. Do you have a visa to stay here? Do you have a passport? Come on and show me it.”

When she tells them she is from Romania, they say they don’t like Romanians and expose their ignorance further by saying she’s a “suicide bomber”. 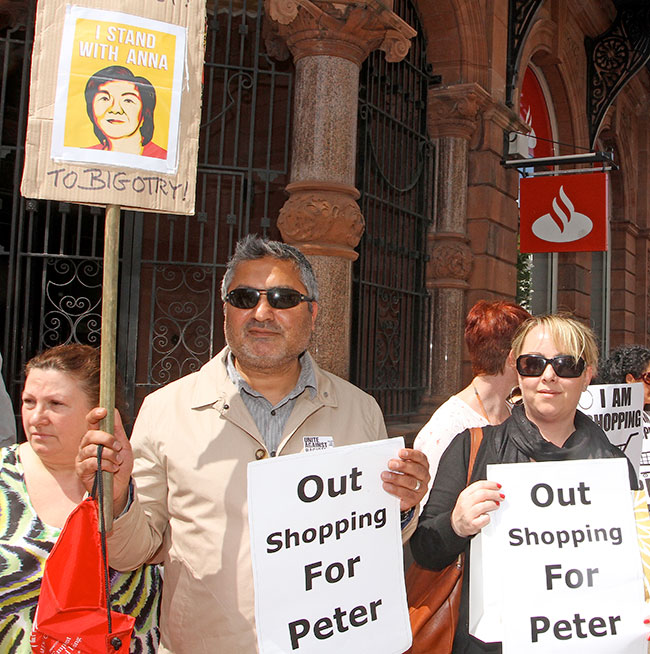 Also in October, on Donegall Avenue in Belfast, a man was assaulted and hit with a bottle and curtain pole while a woman was struck on the head with a paint pot in the same incident.

Westminster immigration chiefs have recently paid £2,000 compensation to a British passport holder ordered to produce ID at George Best Belfast City Airport because officials said she “looked foreign and not from here”. The woman is black. She has lived in Britain and the North of Ireland for 16 years. She was just driving someone to the airport.

“I wasn’t travelling, or passing through an immigration point, and I am a British citizen,” she said, repeating what she had told officers. “I was doing what many other people do without incident, dropping off my relative for her flight.”

And in an echo of how non-whites were treated in apartheid South Africa by being compelled to carry “pass books” to identify them to authorities, the woman added:

“One of my children has asked me if we now have to carry our passports everywhere with us.”

While political figures from Sinn Féin and the SDLP have been proactive in opposing racism – including the rise in racism after the Brexit referendum result – voices of condemnation from the unionist parties (apart from Alliance) have been absent, muffled or even tacitly approving.

The foreign national population in the North of Ireland have never felt more insecure about their vulnerability to xenophobic attitudes.

Sinn Féin’s Seán Lynch, during the Assembly debate, challenged the policing and judicial system to confront this racism head on, saying it is “a challenge that must be met without prejudice and with respect for human rights”.

It is also imperative that the prejudices inherent in the welfare system and other state agencies are tackled and confronted with the same vigour as people would challenge racist thugs attacking someone in the street. Racism must be rooted out at all levels of our society.