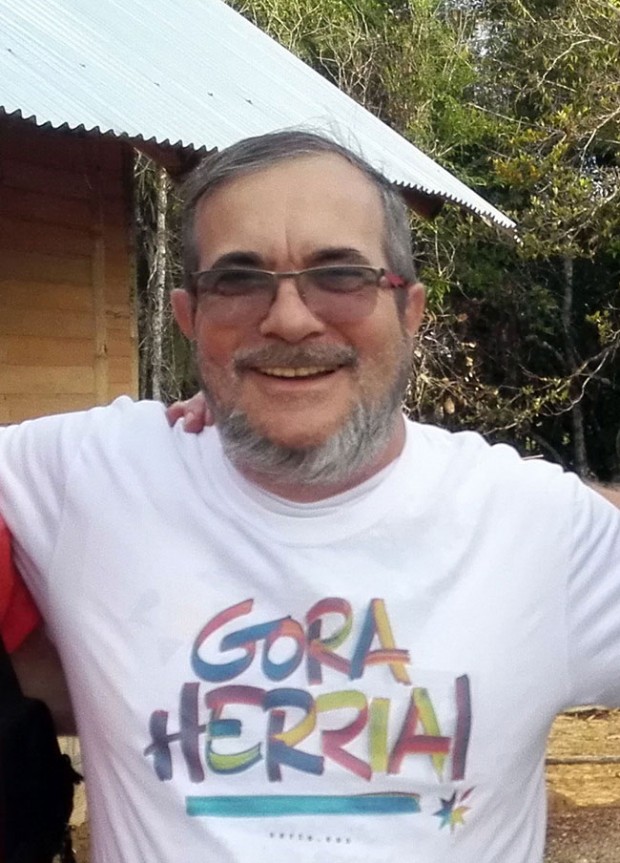 THE Revolutionary Armed Forces of Colombia – People’s Army (FARC-EP) and the government of Juan Manuel Santos signed a new peace deal in Havana, Cuba, on Saturday 12 November in a bid to finally end over five decades of armed conflict in the country.

The agreement came six weeks after the original deal was rejected in a popular vote. The new agreement is not expected to be put to another popular vote but will be submitted to Congress.

His real name is Rodrigo Londoño Echeverri. He was born in 1959 and joined the FARC in 1976 motivated, as he recalls, by the the environment he grew up in.

“We were a poor family in a poor village. Our parents had been deeply affected by violence.

“My mother was a widow. Her first husband had been murdered right at the doorstep. We, as children, were listening to all these stories of death and violence and they slowly shaped our conscience.

“My mother cultivated in me a love for reading. She taught me to read even before I went to primary school.”

We meet Timochenko in Havana, where negotiations between his organisation and the Colombian Government have been taking place for the past four years. He speaks in a calm and gentle tone, smiling from time to time, never lowering his eyes.

Following the signing of the Final Peace Agreement in Cartagena (Colombia), on 26 September came the cold shower of the plebiscite by President Juan Manuel Santos to ratify the concord on 2 October.

A majority of the low turnout of 37% said 'No' to the agreement. A mere few thousand votes allowed the No camp, led by former President Alvaro Uribe, to bring four years of hard work to the edge of being jettisoned.

Mass demonstrations all over Colombia and the determination of the FARC not to let this chance for peace pass brought the parties back to the negotiating table.

The second round of talks with the Government began in Havana on Saturday 5 November to revise the Final Peace Agreement in light of new encounters with civil society organisations, political parties, churches, etc.

Throughout all the difficulties, FARC reiterated its commitment to the peace process.

Q: Following the signing of the Peace Agreements and their popular ratification comes the difficult task of implementing them. What was decided at FARC’s Tenth Guerrilla National Conference in September?

A: The Tenth Guerrilla National Conference approved a fundamental task: work for the full implementation of the Havana Final Agreement. This involves using the mechanisms responsible for verifying and monitoring compliance with the agreement that appear in the texts signed in Havana, including the participation of communities.

On what programmatic and organisational basis will the FARC-EP become an exclusively political organisation?

That precisely was one of the resolutions of the Tenth Guerrilla National Conference. The FARC are and have always been, since our foundation, a political party that had to take up arms to counter state violence. Now we have to adapt and reshape the party to the new conditions of legality and modernity.

This is not about changing our ideology or our political and organisational principles. As it was deliberated by the conference, that will be a matter for discussion and approval at the Constitutive Congress of the new party to be held no later than May 2017, provided that the agreements signed in Havana are implemented. 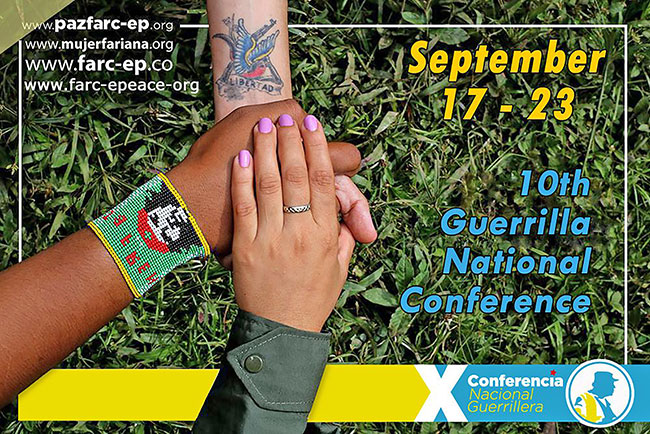 The full implementation of the agreements will be accompanied and verified by the international community. How important is this aspect?

The international community has been getting involved in the peace process gradually but consistently. In the beginning it was the participation of Cuba and Norway, always alongside Venezuela. Then came Chile, and later signals of approval were coming from the European Union, the United States, the Union of South American Nations, Germany, Russia, the United Nations and its Security Council. That has tremendous value for us as we got to the negotiations table depicted in the worst possible way by much of the international community.

We have shown our ideological and political stand, our vocation for peace, our seriousness and responsibility when it comes to commitments.

All of this has put us on another level and has given the peace process an openly international relevance.

The dismantling of paramilitarism is undoubtedly essential to building a stable and lasting peace. To what extent can the international community exert influence in the achievement of this goal?

Paramilitarism is one of the ways in which the Colombian Government has countered political opposition in Colombia, though not the only one.

There has been judicial persecution, police frame-ups and, of course, open violence by Government agents.

What happens is that thanks to the struggle of many people in our country, as well as international concern, open violence by the state is becoming more difficult. However, you can still see the brutal repression that bodies like the National Police and the Colombian Army often used against protest and popular mobilisation.

Our struggle is for the banning of all forms of violence used by the state against the Colombian people. We believe that with this agreement we have taken significant steps in that direction.

Paramilitarism has been given special attention in the Havana Agreement since its illegal nature makes it easier for the state to cover up its violent actions behind those gangs of murderers.

Several things have been agreed on this issue which, should they be implemented, would mean a real shift in terms of guarantees and rights for opposition parties and organisations. The international community plays an important role in this matter and we hope that their contribution remains effective. 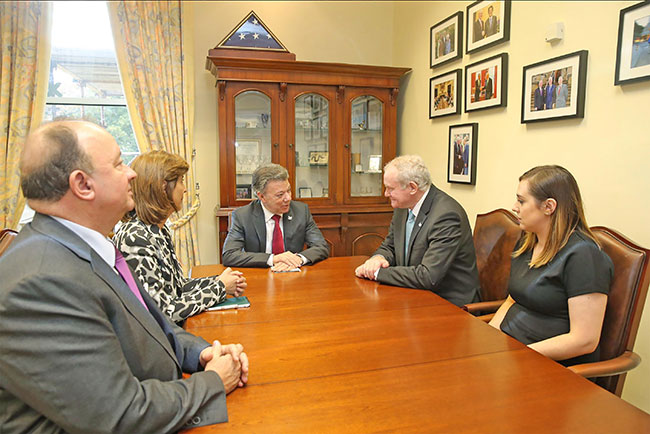 Comprehensive rural reform seems to be the key for the Colombian countryside to return to its normal social life as well as its enormous productive potential. How would you work to ensure the implementation of what was agreed on this point?

The Agreement on Comprehensive Rural Reform is a fait accompli. What is coming next is the need for the implementation and full compliance by the state. This requires ensuring that rural communities take the agreements into their hands, and fully understand and appreciate them. They have to reclaim these agreements. Simply to achieve this will involve great effort but, once unleashed – as a result of the strength of peasants, black and indigenous communities – we can expect a revival of popular activity for the improvement of its living conditions, plans for education, housing, health, roads and infrastructure, the development and implementation of plans for local and regional development.

There’s an open space there for social and political action, and of course, the communities and we ourselves would be open to all possibilities for international assistance.

These negotiations have been long and difficult. What would you say are the main achievements of this process?

I would underline the fact that the state has formally committed to eradicate all forms of violence against political opposition and to establish full guarantees for its political activity, as well as for the life and freedom of its leaders and activists.

The issues of victims, the establishment of truth and transitional justice has been particularly delicate, given the violence during the conflict and its long duration.

Undoubtedly those were highly sensitive issues, as confirmed by the time it took to reach an agreement on the subject – a year and a half of discussions that still only led to the signing of an agreement that the Colombian Government insisted on reviewing after it had signed it, thus endangering the seriousness of the process itself. Fortunately, things finally came to fruition.

The victims participated in the process and I can say they were, at all times, at the centre of the discussions.

We also benefitted through the widespread recognition from victims’ organisations, different political parties, the Colombian people and all kinds of social and popular organisations, as well as recognition and applause from the international community, including institutions such as the International Criminal Court.

The work was hard, but it was worth it, no doubt. The agreement contains unprecedented but valuable legal formulas made into law and that alone speaks of its importance.

The agreement we signed may not have made everyone happy, because there are extreme sections that would oppose anything, just for the sake of saying no.

The agreement speaks of “demobilisation” of the FARC-EP and political and social integration of former guerrillas. How will you ensure this can happen successfully and perhaps even become a model?

We always insist on the incorrectness of the term “demobilisation” in our case. The FARC-EP are not going to demobilise but will transform into an active political force which will remain cohesive and united in the struggle for its goals of taking power for the people.

Demobilising would mean disintegrating the organisation and we are far from thinking of doing that.

We’ll reincorporate into civilian life according to our economic, social and political interests, leaving behind all forms of violence and illegality, and for this provisions have been written into the agreements.

I must say that the state took a hard position in this regard. It will not be easy. We understand the dimensions of the challenge we have assumed and we have never lost sight of the interests of our class enemies. Of course, any selfless aid offered in good faith to help reach this goal would be well accepted.

Colombia has always been a country of people who love work, rich in natural resources but subject since its independence from Spain to an epidemic of violence that resulted in dozens of civil wars.

Of course, the origin of all these wars relates to the unequal distribution of wealth and the declared intention of the ruling classes to resolving political differences through the use of force and violence.

Recent generations of Colombians have not known a single day of peace. Now, after more than five decades of armed confrontation, we have managed to arrange a formula for a political solution that promises to create all the necessary conditions to permanently stop the use of weapons and violence in national and regional political life.

We definitely deserve a better destiny and we are determined to build it.