A Tale of Two Cities (and a tale of two parties) 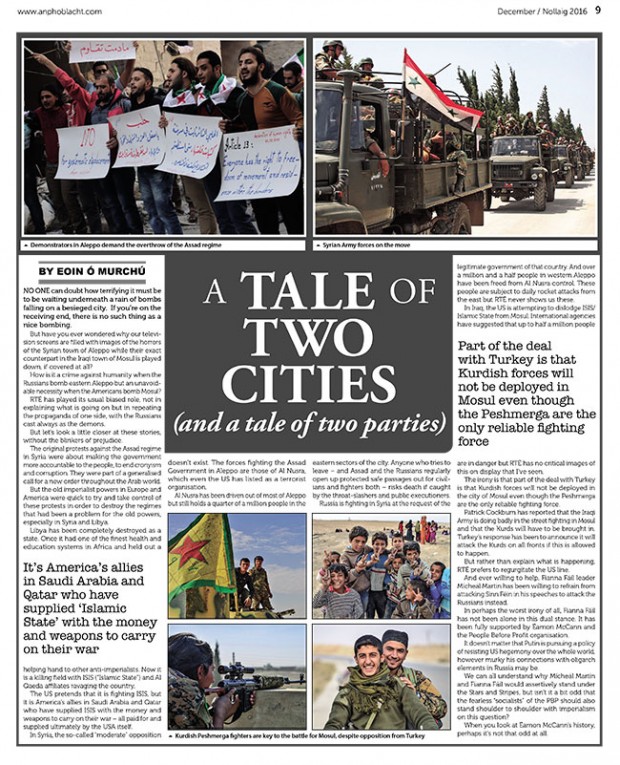 NO ONE can doubt how terrifying it must be to be waiting underneath a rain of bombs falling on a besieged city.  If you’re on the receiving end, there is no such thing as a nice bombing.

But have you ever wondered why our television screens are filled with images of the horrors of the Syrian town of Aleppo while their exact counterpart in the Iraqi town of Mosul is played down, if covered at all?

How is it a crime against humanity when the Russians bomb eastern Aleppo but an unavoidable necessity when the Americans bomb Mosul?

RTÉ has played its usual biased role, not in explaining what is going on but in repeating the propaganda of one side, with the Russians cast always as the demons.

But let’s look a little closer at these stories, without the blinkers of prejudice.

The original protests against the Assad regime in Syria were about making the government more accountable to the people, to end cronyism and corruption. They were part of a generalised call for a new order throughout the Arab world.

But the old imperialist powers in Europe and America were quick to try and take control of these protests in order to destroy the regimes that had been a problem for the old powers, especially in Syria and Libya.

Libya has been completely destroyed as a state. Once it had one of the finest health and education systems in Africa and held out a helping hand to other anti-imperialists. Now it is a killing field with ISIS (“Islamic State”) and Al Qaeda affiliates ravaging the country.

The US pretends that it is fighting ISIS, but it is America’s allies in Saudi Arabia and Qatar who have supplied ISIS with the money and weapons to carry on their war – all paid for and supplied ultimately by the USA itself.

In Syria, the so-called “moderate” opposition doesn’t exist. The forces fighting the Assad Government in Aleppo are those of Al Nusra, which even the US has listed as a terrorist organisation.

Al Nusra has been driven out of most of Aleppo but still holds a quarter of a million people in the eastern sectors of the city. Anyone who tries to leave – and Assad and the Russians regularly open up protected safe passages out for civilians and fighters both – risks death if caught by the throat-slashers and public executioners.

Russia is fighting in Syria at the request of the legitimate government of that country. And over a million and a half people in western Aleppo have been freed from Al Nusra control. These people are subject to daily rocket attacks from the east but RTÉ never shows us these.

In Iraq, the US is attempting to dislodge ISIS/Islamic State from Mosul. International agencies have suggested that up to half a million people are in danger but RTÉ has no critical images of this on display that I’ve seen.

The irony is that part of the deal with Turkey is that Kurdish forces will not be deployed in the city of Mosul even though the Peshmerga are the only reliable fighting force.

Patrick Cockburn has reported that the Iraqi Army is doing badly in the street fighting in Mosul and that the Kurds will have to be brought in. Turkey’s response has been to announce it will attack the Kurds on all fronts if this is allowed to happen.

But rather than explain what is happening, RTÉ prefers to regurgitate the US line.

And ever willing to help, Fianna Fáil leader Mícheál Martin has been willing to refrain from attacking Sinn Féin in his speeches to attack the Russians instead.

In perhaps the worst irony of all, Fianna Fáil has not been alone in this dual stance. It has been fully supported by Éamon McCann and the People Before Profit organisation.

It doesn’t matter that Putin is pursuing a policy of resisting US hegemony over the whole world, however murky his connections with oligarch elements in Russia may be.

We can all understand why Mícheál Martin and Fianna Fáil would assertively stand under the Stars and Stripes, but isn’t it a bit odd that the fearless “socialists” of the PBP should also stand shoulder to shoulder with imperialism on this question?

When you look at Éamon McCann’s history, perhaps it’s not that odd at all.