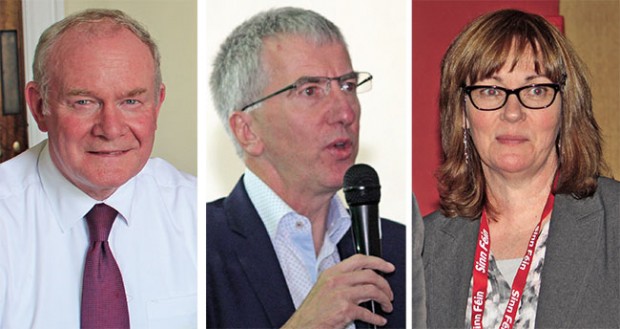 SINN FÉIN MINISTERS announced plans for major projects in the Assembly this month that will see huge transformations right across society.

Infrastructure Minister Chris Hazzard said he is committed to the delivery of one of the largest transport upgrades in Belfast, the York Street interchange project.

He also reiterated his commitment to the A5 and A6 road projects in the north-west.

Health Minister Michelle O’Neill announced to the Assembly plans for the biggest shake-up of the health service in eight decades. Her plans will deliver a 21st century healthcare service and help improve all-Ireland health service. Her move was welcomed by healthcare workers and patients among others working in the health sector.

Sinn Féin’s international work was front and centre at the Assembly in recent weeks with representatives meeting international visitors as well as ministers travelling overseas.

Colombian President and recent Nobel Peace Prize winner Juan Manuel Santos visited Stormont to meet with Martin McGuinness, Megan Fearon and other ministers to discuss the impact that the peace process here has had on helping to end the 52-year conflict in Colombia.

Martin McGuinness and Finance Minister Máirtín Ó Muilleoir both went to the United States to meet investors and attract businesses to the North.

While Sinn Féin ministers and MLAs engage positively and constructively on the international stage to attract inward investment, share experience of the Peace Process and stand in solidarity with communities in struggle across the world, SDLP leader Colum Eastwood opted for a lazy, populist response to the result of the US Presidential election.

His political naivety and lack of judgement was plain to see when he said before and after the election that he would not visit a Trump White House (not that he’d be high up the invite list of any administration anyway).

The contradictions of the SDLP/Ulster Unionist “official Opposition” and smaller parties in the Assembly continue with a total lack of direction or strategy coming from their benches.

In a debate calling for special designated status for the North within the EU after Brexit, People Before Profit MLAs Eamonn McCann and Gerry Carroll aligned themselves with the DUP, Jim Allister’s Traditional Unionist Voice, and the most right-wing Brexiteers of the British Tory Party by blocking the move.

They also failed to explain their stance and why they appear to be in agreement with the likes of Boris Johnson and Liam Fox on dragging the North out of the EU against the democratic wishes of the people. Leaving the EU would deny crucial funding to communities they represent in Derry and west Belfast but the pair made no mention of that.

The Assembly chamber will shortly say farewell to west Belfast Sinn Féin MLA Jennifer McCann, who is stepping down as an MLA to take up a new role as a party adviser to Health Minister Michelle O’Neill. Even though she will still be working in the building, her fiery involvement in Assembly debates will certainly be missed, including by SDLP and unionist opponents.