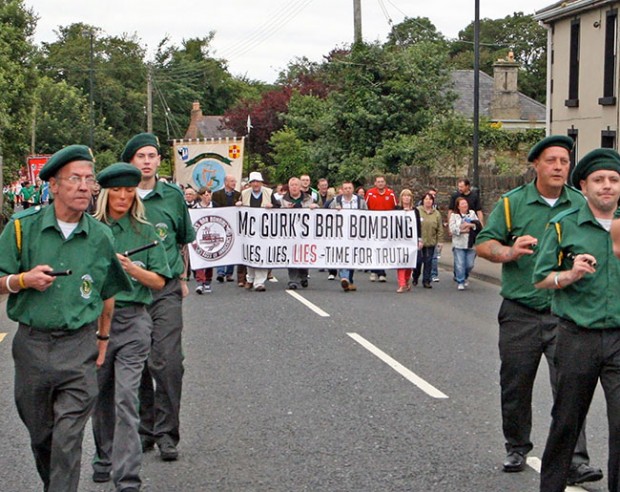 • Families of the McGurk's victims have been campaigning for decades

COINCIDING with the 45th anniversary of the McGurk’s Bar bomb attack by the Ulster Volunteer Force in 1971 that killed 15 nationalist civilians in north Belfast, Ciarán Mac Airt, researcher and author of The McGurk’s Bar Bombing: Collusion, Cover-Up and a Campaign for Truth, will face cross-examination at an Information Rights Tribunal in London as he seeks the release of vital British Army files.

Mac Airt, whose grandmother Kitty Irvine died in the UVF bombing on 4 December 1971, has just uncovered damning information proving that senior British Army officers based in the North were aware that the attack was carried out by loyalists yet persisted in a disinformation strategy blaming the IRA.

The information uncovered by Mac Airt, who manages the research charity Paper Trail, came from a British Army “Headquarters Northern Ireland Log” for December 1971. It quotes a British Army Ammunition Technical Officer (ATO) who was at the scene of the bombing at the public house at the junction of North Queen Street and Great Georges Street in north Belfast.

The log states that the ATO was “convinced bomb was placed in entrance way on ground floor. The area is cratered and clearly was the seat of the explosion”.

The British Government is resolutely refusing to give the McGurk’s families or their legal team access to the rest of the file, which is to remain sealed until 2056 – 85 years after the bombing.

It is this decision that Ciarán Mac Airt is challenging. His case is going before the “first tier tribunal”, which hears information rights appeals, on 8 and 9 December, just days after the 45th anniversary of the massacre.

As more and more evidence emerges about the McGurk’s Bar bombing, it becomes ever more apparent that the British Government, senior unionist politicians and the British crown forces (including the British Army, Intelligence services and the RUC) were involved in strenuous efforts to cover up an attack by unionist paramilitaries that clearly had a major impact on the conflict at that time, given the huge loss of life.

Senior military and RUC personnel and high-ranking politicians were happy to perpetuate the propaganda war lie that the IRA was responsible as it suited their political and military objectives, which was to defeat the republican struggle. 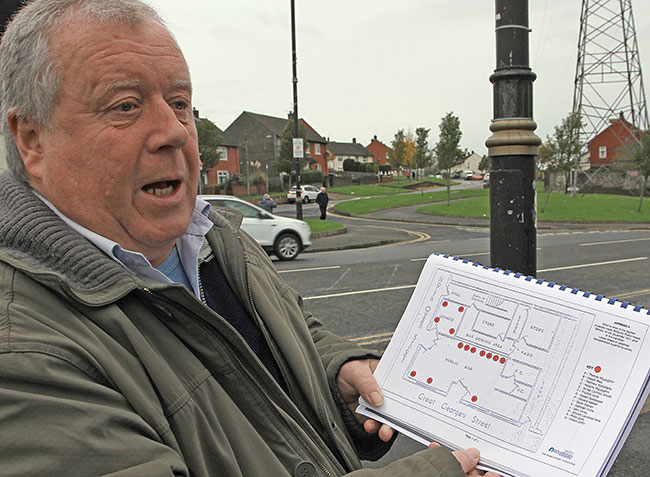 Anatomy of a cover-up

Within hours of the bomb exploding, the RUC began to disseminate false information and laid the foundations for a far wider conspiracy that involved military and political figures at the highest levels at Stormont and Westminster.

In one document uncovered by Paper Trail, the RUC duty officer’s report for the 24 hours up to 8am on Sunday morning 5 December states that “just before the explosion a man entered the licensed premises and left down a suitcase, presumably to be picked up by a known member of the Provisional IRA. The bomb was intended for use on other premises. Before the ‘pick-up’ was made, the bomb exploded.”

This clearly constructed lie became the central plank of the subsequent political, military, media and psychological strategy waged by the British state around the McGurk’s bombing for years to come.

On Monday 6 December, according to a Home Office note of a meeting between the North’s premier and leader of the Ulster Unionist Party, Brian Faulkner, and then British Home Secretary Reginald Maudling in London, Faulkner not only repeated the RUC-concocted version of events – saying the explosives were likely carried by the IRA “rather than Protestant extremists” – but went on to tell Maudling that he had “asked the RUC to find out whether anything was known about the associations of the people who were killed or injured”.

On Tuesday 7 December, the second most influential unionist politician in the Stormont Government, hardline Home Affairs Minster John Taylor, stated in Parliament that “the plain fact is that the evidence of the forensic experts supports the theory that the explosion took place within the confines of the walls of the building”.

Neither Faulkner nor Taylor gave any consideration to the views of the ATO recorded in the HQNI Log.

Other security documents previously unearthed by Mac Airt reveal another layer of disinformation in the state’s story, which implied that some of those killed were directly involved in the bomb plot.

According to one document, a British Army/MI5 HQNI Intelligence summary (HQNI INTSUM) from 9 December, “forensic and EOD (Explosive Ordnance Disposal) experts tend to indicate that the explosion was caused accidentally inside the public house by premature detonation, amongst a group which contained an identified IRA victim” – effectively linking some of the dead to the IRA and the explosion.

While this document notes that “this was inconclusive”, it also refers to a group calling itself “the League of Empire Loyalists” which claimed responsibility for the attack in telephone calls to the Irish News and Daily Express.

Yet the author’s comment that “this organisation ceased to exist in 1968” reflects the official line that sought to lay the blame at the door of the IRA.

By this stage, the IRA had denied involvement in the bombing, as had the so-called “Official IRA”.

In a further escalation of the disinformation strategy, another “secret” document, a British Ministry of Defence “Current Situation Report” from 14 December, says that “five of the victims were killed by blast – indicating that the explosion must have been inside the bar, and raising the very strong presumption that it was caused by the accidental detonation of a bomb being carried by one of the customers – as has seemed likely all along”.

The document went on to insist:

“In the view of [British Army] Headquarters Northern Ireland, it is important to put this point on record in order to discourage speculation about who was responsible for the explosion.”

One of the most damning documents uncovered by the McGurk’s families is a note from the Joint Security Committee minutes from 16 December of a briefing by RUC Chief Constable Graham Shillington and his head of RUC Special Branch to Stormont Prime Minister Brian Faulkner, Home Affairs Minister John Taylor and General Harry Tuzo, head of the British Army in the North:

Later, in May 1972, British Home Secretary William Whitelaw was at pains to claim that some of those killed were responsible and “the facts do not support the theory that the bomb was planted by Protestant extremists”. Whitelaw concluded his remarks by claiming: “The IRA is desperately trying to provoke a Protestant reaction.” 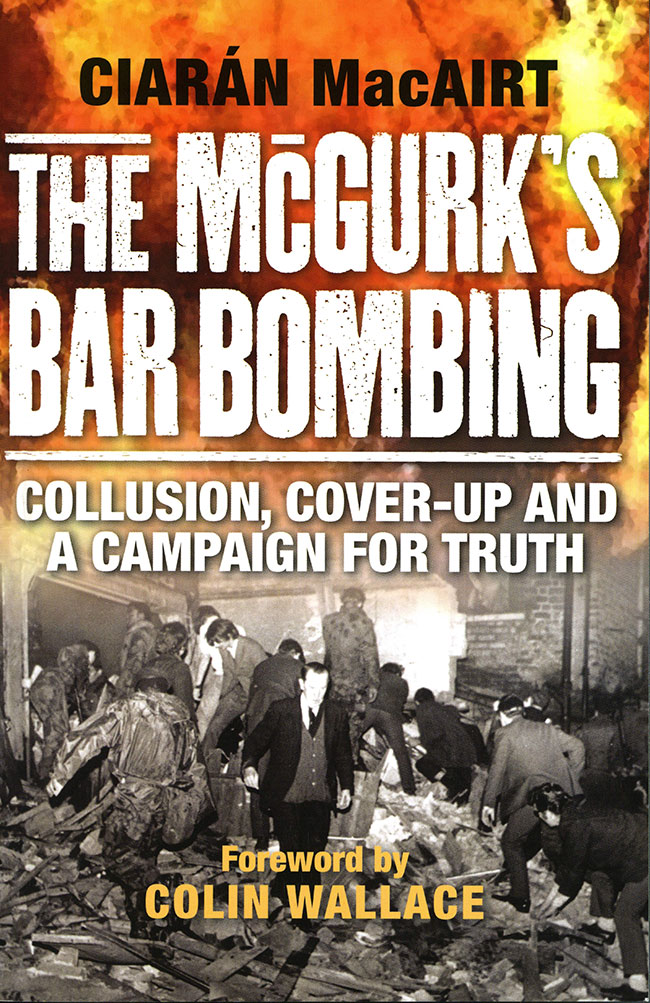 Drawing on the counter-insurgency strategies developed by Westminster to combat liberation struggles in parts of the British Empire such as Kenya, Malaya, Aden, Cyprus and Palestine, the British understood the conflict would develop into a war of liberation, with the IRA in the leading role.

To that end, the British deployed greater numbers of troops. More significantly, though, they posted Brigadier Frank Kitson – the British Army’s foremost colonial counter-insurgency theorist and operational commander – to the North where he was based at Palace Barracks, in Holywood, County Down.

In his book, Ciarán Mac Airt highlights “Information Policy” and how Kitson brought this to the heart of military operations. Kitson had Lieutenant Colonel ‘Johnny’ Johnston of the British Army’s Psychological Operations (Psy-Ops) training division posted to the North to run the “Information Liaison Department”.

Elements of the syllabus that Johnston taught included propaganda and the use of mass media, intelligence and planning for psyops, modern advertising, and community relations.

It is in the context of this counter-insurgency programme that we get a fuller understanding of the strategy of disinformation used in the wake of the McGurk’s attack and of its objectives.

According to documents quoted by Mac Airt, “planned psychological activities, in peace and war [are] directed towards enemy, friendly and neutral audiences in order to create attitudes and behaviour favourable to the achievement of our political and military objectives”.

“British forces have used psy-ops as a military support weapon. In the Malayan operations, psy-ops were used to isolate the terrorists from the civilian population, create apathy, discord and defeatism within the terrorist organisation and eventually to conduct an effective surrender campaign.”

Essentially then, the bombing of McGurk’s Bar by the unionist UVF was exploited by the British and unionist governments to undermine the IRA and was used to try and isolate the IRA within the nationalist community.

It is a microcosm of how psy-ops, as a political and military tactic, set the tone for how information and media would be used in the war against the IRA, regardless of the cost to the families of those killed and injured.

Meanwhile, the families of those killed in the McGurk’s Bar bombing are demanding a new inquest into the deaths.

Speaking to An Phoblacht, Robert McClenaghan (whose grandfather, Philip Garry, was one of 15 civilians to die in the bombing) says:

“With the information we have now uncovered, particularly through Ciarán Mac Airt’s research, we believe there are sufficient grounds for a new inquest to be opened.

“An inquest is the best way for the families to get a proper inquiry into the events of 4 December 1971.”

The campaigner described how “the state has continued with, and is continuing with, a cover-up of their role in the bombing and its aftermath”.

Robert cited the flawed 2010 report of Police Ombudsman Al Hutchinson when, in his initial findings, he made mistakes in naming the dead and then cleared the RUC of failing to properly investigate the attack. So angry were relatives that Hutchinson withheld publication of his findings.

“It is my view that there appear to be no further investigative opportunities available.”

The families saw this as the ‘RUC old guard’ within the PSNI closing the door in their faces.

To add to the families’ frustration, a 2015 report by the now-defunct Historical Enquiries Team (HET) contradicted the Ombudsman’s assessment, saying that, in its view, there was no evidence of bias in the original RUC probe.

Angry at this state of affairs, the families are now challenging current PSNI Chief Constable George Hamilton to reopen the investigation.

As An Phoblacht goes to print, the Chief Constable is standing firm in his view that “there are currently no further investigative steps to be taken”.