Reconciliation is an imperative – not an option 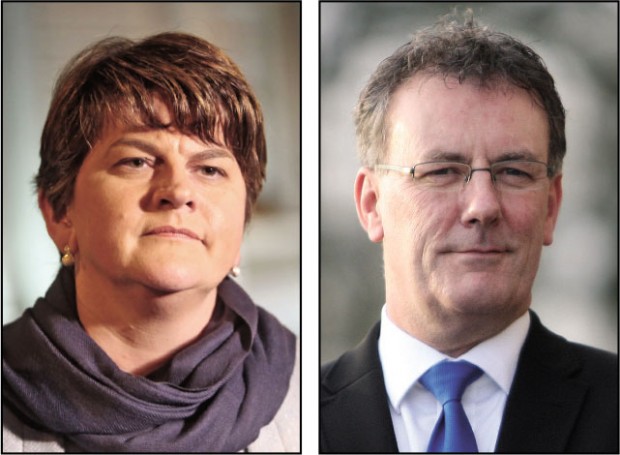 • DUP and UUP leaders Foster and Nesbitt – will they show leadership in reconciliation?

All sides caused pain and all sides suffered. There were different sides to our conflict and there are multiple narratives

RECONCILIATION AND HEALING in our society are an imperative for the Irish Peace Process. But their achievement continues to be both challenging and elusive. The required political and civic critical mass to bring them about still does not exist. We have to collectively work at building momentum to make them the new phase of the Peace Process.

Very recently, I attended an event organised by the County Fermanagh Orange Order, in association with local Protestant churches, to discuss the1916 Easter Rising. I believe it was an important event genuinely aimed at developing greater understanding about our different traditions and identities and I commend the organisers for that.

I said from the floor that it is quite valid for us to agree to disagree but that willingness to engage with each other on the basis of equality must be paramount. Engagement about our historic and current differences increases mutual understanding and that builds mutual respect.

Huge suffering has taken place in Ireland, North and South, and also in Britain.

The divisions in our society that exist are visceral. The pain from past actions experienced by our generation is real, not abstract or in another place.

I am sorry that hurt was caused to many families. That extends to the families of all combatants who acted on behalf of the British state.

All wars and political conflict create carnage and death. No war should be glorified or romanticised. That applies to our most recent conflict in Ireland.

But all sides caused pain and all sides suffered.

Huge numbers of nationalist civilians, Sinn Féin members and IRA Volunteers were killed and the pain of their families is equal to the grief of any other family. 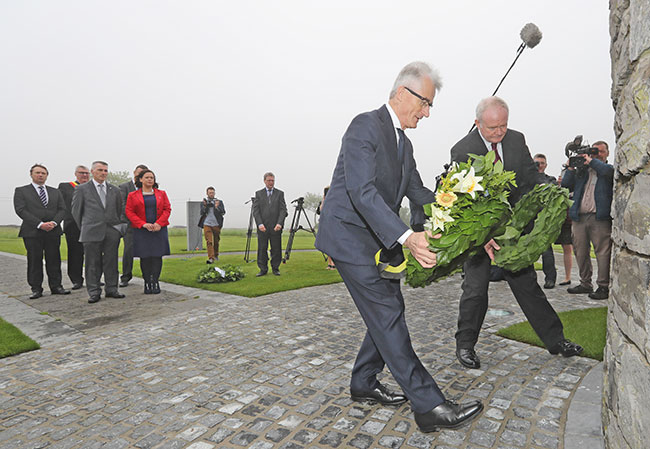 • Martin McGuinness lays a wreath at the First World War monument in Flanders alongside Geert Bourgeois, Minister-President of Flanders

There were different sides to our conflict and there are multiple narratives.

There are issues about the past about which we will have to agree to disagree.

I may disagree fundamentally with the British state and political unionist narratives, but I also recognise that for those of that tradition these are valid and legitimate.

There are no right victims and wrong victims; no innocent and guilty victims.

When we speak of the legacy of the past it is not abstract for many families. It is real and living.

So it is not acceptable to pass that legacy on to a new generation to sort out. The legacy of our past and absence of reconciliation has ensured that we remain a deeply divided society in the present.

The legacy of the past cannot be avoided if we are to move forward to a new phase of the Peace Process.

We all need to be prepared to deal with these issues by coming together privately and publicly to engage meaningfully, and not to score points.

Reconciliation will not be built upon resentment and recrimination.

The mechanisms agreed under the Stormont House Fresh Start Agreement are an essential vehicle for moving forward.

It is unacceptable and wrong that the potential of this framework is being held back by the British Government’s veto on maximum information disclosure and Westminster’s refusal to release the funds that would allow legacy investigations and inquests to proceed.

There is no point in ending the war for it to be carried on politically and psychologically – by refusing to engage, to reach out, and to lead.

Sinn Féin is absolutely committed to ensuring a process of reconciliation and healing is established.

Republicans have stretched and challenged ourselves to develop the Peace Process.

And we have done so in pursuit of reconciliation and healing – sometimes at a cost.

It is now time that others began to do the same.

Reconciliation is not a one-way street.

At this year’s Ard Fheis, Sinn Féin adopted our policy document on reconciliation and healing, Towards an Agreed and Reconciled Future. It is a substantive, public policy contribution to designing a roadmap towards making reconciliation the new phase of our Peace Process.

Sinn Féin is fully committed to that agenda. We cannot do this alone.

It is crucial that others also begin to embrace this challenge and responsibility.

We remain up for the challenges that lie ahead in this process.

Who will join us?