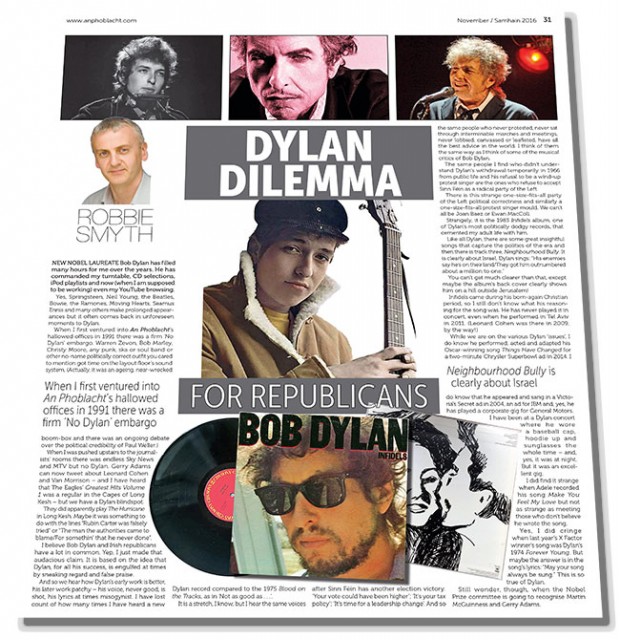 NEW NOBEL LAUREATE Bob Dylan has filled many hours for me over the years. He has commanded my turntable, CD selections, iPod playlists and now (when I am supposed to be working) even my YouTube browsing.

Yes, Springsteen, Neil Young, the Beatles, Bowie, the Ramones, Moving Hearts, Seamus Ennis and many others make prolonged appearances but it often comes back in unforeseen moments to Dylan.

When I first ventured into An Phoblacht’s hallowed offices in 1991 there was a firm ‘No Dylan’ embargo. Warren Zevon, Bob Marley, Christy Moore, any punk, ska or soul band or other no-name politically correct outfit you cared to mention got time on the layout floor’s sound system. (Actually, it was an ageing, near-wrecked boom-box and there was an ongoing debate over the political credibility of Paul Weller.)

When I was pushed upstairs to the journalists’ rooms there was endless Sky News and MTV but no Dylan. Gerry Adams can now tweet about Leonard Cohen and Van Morrison – and I have heard that The Eagles’ Greatest Hits Volume 1 was a regular in the Cages of Long Kesh – but we have a Dylan blindspot.

They did apparently play The Hurricane in Long Kesh. Maybe it was something to do with the lines “Rubin Carter was falsely tried” or “The man the authorities came to blame/For somethin’ that he never done”.

I believe Bob Dylan and Irish republicans have a lot in common. Yep, I just made that audacious claim. It is based on the idea that Dylan, for all his success, is engulfed at times by sneaking regard and false praise.

And so we hear how Dylan’s early work is better, his later work patchy – his voice, never good, is shot, his lyrics at times misogynist. I have lost count of how many times I have heard a new Dylan record compared to the 1975 Blood on the Tracks, as in ‘Not as good as . . .’.

It is a stretch, I know, but I hear the same voices after Sinn Féin has another election victory. ‘Your vote could have been higher’; ‘It’s your tax policy’; ‘It’s time for a leadership change’. And so the same people who never protested, never sat through interminable marches and meetings, never lobbied, canvassed or leafleted, have all the best advice in the world. I think of them the same way as I think of some of the musical critics of Bob Dylan.

The same people I find who didn’t understand Dylan’s withdrawal temporarily in 1966 from public life and his refusal to be a wind-up protest singer are the ones who refuse to accept Sinn Féin as a radical party of the Left.

Strangely, it is the 1983 Infidels album, one of Dylan’s most politically dodgy records, that cemented my adult life with him.

Like all Dylan, there are some great insightful songs that capture the politics of the era and then there is track three, Neighbourhood Bully. It is clearly about Israel. Dylan sings: “His enemies say he’s on their land/They got him outnumbered about a million to one.”

You can’t get much clearer than that, except maybe the album’s back cover clearly shows him on a hill outside Jerusalem!

Infidels came during his born-again Christian period, so I still don’t know what his reasoning for the song was. He has never played it in concert, even when he performed in Tel Aviv in 2011. (Leonard Cohen was there in 2009, by the way!)

While we are on the various Dylan ‘issues’, I do know he performed, acted and adapted his Oscar-winning song Things Have Changed for a two-minute Chrysler Superbowl ad in 2014. I do know that he appeared and sang in a Victoria's Secret ad in 2004, an ad for IBM and, yes, he has played a corporate gig for General Motors.

I have been at a Dylan concert where he wore a baseball cap, hoodie up and sunglasses the whole time -– and, yes, it was at night. But it was an excellent gig.

I did find it strange when Adele recorded his song Make You Feel My Love but not as strange as meeting those who don’t believe he wrote the song.

Yes, I did cringe when last year’s X Factor winner’s song was Dylan’s 1974 Forever Young. But maybe the answer is in the song’s lyrics: “May your song always be sung.” This is so true of Dylan.

Still wonder, though, when the Nobel Prize committee is going to recognise Martin McGuinness and Gerry Adams.