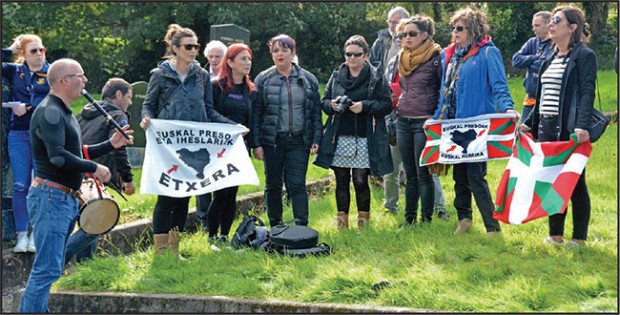 FRANCIE MOLLOY MP, several Sinn Féin TDs and party county councillors, republican former prisoners, a delegation of Basque political activists, and hundreds of Irish republicans joined with members of the O’Neill family on 25 September for the 20th anniversary commemoration of the killing of IRA Volunteer Diarmuid O’Neill in England.

A piper and colour party led the large crowd on a short parade into Timoleague Cemetery, west Cork, to the graveside of 27-year-old Diarmuid, who was shot dead by London police on 23 September 1996.

Michael O’Donovan, Cathaoirleach of Clonakilty Sinn Féin (which has organised the annual commemoration every year since 1997), extended a céad míle fáilte to all.

He reminded people that Amnesty International and other human rights organisations have repeatedly called for a public inquiry into the controversial killing as it was clear that Diarmuid was under round-the-clock surveillance for months before the killing.

He extended a special welcome to Diarmuid’s family “who, on a very personal level, must find this date very trying indeed. They have stood by their son’s memory, they have cried over his grave but they have also stood proudly with us in his memory.”

He also welcomed “our comrades from the Basque Country" who were present in numbers and led by Diarmuid’s fiancée at the time of his killing, Karmela.

Wreaths were laid by a number of people, including by Diarmuid’s family, the Justice for Diarmuid O’Neill Campaign in London, the West London Republican Support Group, Karmela Ereno for Basque comrades, and Eddie Butler on behalf of republican ex-prisoners. A lament was played by piper Dermot Milner.

Francie recalled attending the inquest into Diarmuid’s killing in London, where the police shooters were vindicated. He believes that the order to kill an Irish republican at that time came from the highest levels in the British Government of the day.

The Basque group performed a musical dance at the side of Diarmuid’s grave as is customary in their country when they remember a fallen patriot. They then sang a beautiful song called Txoria Txori (The Bird) and they also placed a sunflower, known in Basque as an Eguzki Lorea, on Diarmuid’s grave.