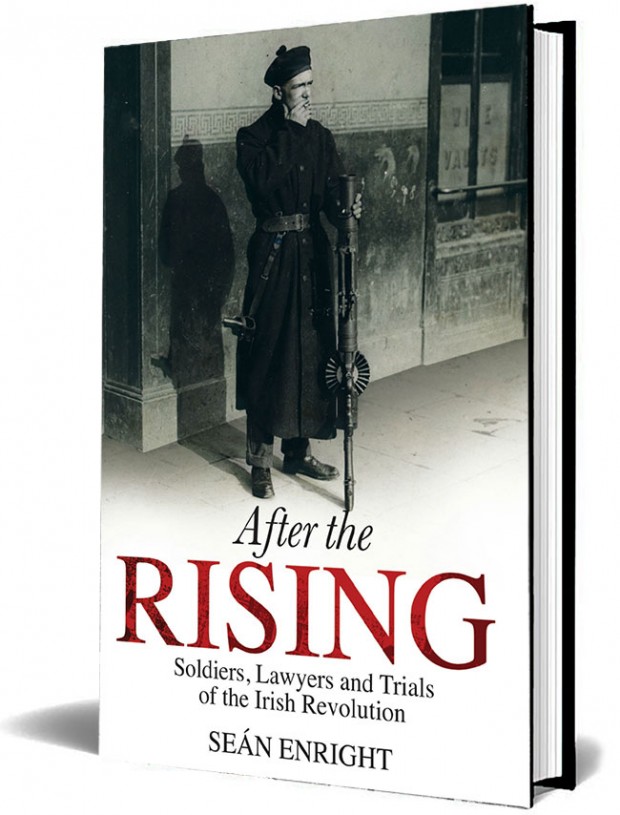 After the Rising: Soldiers, Lawyers and Trials of the Irish Revolution. By Seán Enright. Irish Academic Press €17.50 / €45

THIS WORK is a follow-up to the author’s  previous volume, Easter 1916, The Trials, which dealt with the trials of the Easter Week combatants.

The first section of the book examines the complete breakdown of the juridical system in the period from the aftermath of 1916 up until the Truce and commencement of Treaty negotiations in 1921.

Important or notable trials from the period are then examined on a chronological basis in the second half of the book.

The final section consists of 50 pages of detailed notes and source information that stand as a testament to the level of scrupulous research invested in this volume.

The trials of Eoin Mac Néill, Roger Casement and Constance Markievicz obviously stand out but the book also considers lesser-known individuals such as John Madden, Joseph Dowling, and Thomas Traynor.

The opening section of the book dealing with the breakdown of the established judicial processes is arguably the most interesting section of the work. It outlines the British Government’s preoccupation with the Versailles settlement at the end of World War One and its apparent assumption that Ireland could be dealt with by a combination of concession and repression: home rule on the one hand, and a combination of judicial and extra-judicial measures to  isolate radicals from the general population. The failure of this policy is evidenced by the increasingly repressive measures introduced by the British Government in a forlorn attempt to bolster their crumbling authority.

This is a beautifully-written and well-researched book by an author with a real affinity for his subject – perhaps too much of an affinity in some cases. Seán Enright, although Irish, is a circuit judge in England who practised as a London barrister for many years. Whilst it is apparent that the author has strived to achieve objectivity, he has not always achieved it.

Actions of Auxiliaries are often accompanied by observations of their heroic war records; no such mitigation of republican actions is apparent.

He seems to possess a particular dislike for Constance Markievicz, whom he terms “a snob”, ignoring all evidence to the contrary. In a comment (quite remarkable coming from a barrister) that could be interpreted as a tacit endorsement of police/military death squads, the author observes:

“Disaffected policemen shot down those the law could not touch. Markievicz and her comrades had unravelled the law and no one was safe.”

Notwithstanding these observations of bias from an even more biased reviewer such as myself, this really is an excellent book and worth adding to any collection.