Symbols of resilience and resistance 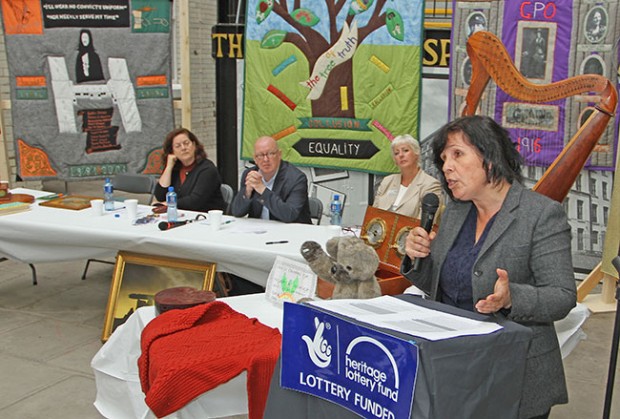 ‘Communities have begun to reclaim their own past as an important part of the present’ – Dr Johanne Devlin Trew, University of Ulster

THE ARRAY of prison crafts on display in Belfast’s Conway Mill for the launch of the ‘Irish Republican Prison Crafts: Making Memory & Legacy’ project is testimony to the creativity of republican POWs who produced harps, Celtic crosses, handbags, wallets and soft toys for family and friends. These now reflect part of the legacy of prison struggle and evoke memories of that struggle and the effects it had on the lives of those who experienced imprisonment from the other side of the prison wall – the families, friends and comrades on the outside.

The project is co-ordinated by Coiste na nIarchimí, the republican ex-prisoners’ network, and supported by the West Belfast Partnership Board.

Speaking at the project’s official launch on Monday 26 September, Pádraig Ó Dubhda from Coiste na nIarchimí outlined its significance as a means of allowing families to tell the story of how they were affected by imprisonment and the connections between the prisoner who crafted the piece and the person receiving it.

“The stories of ex-POWs and their families are woven through the history of the piece of art or craft,” said Pádraig.

“Most pieces have been in a household for many years and the status of the piece over that time has inevitably changed and contains the narrative of more than one generation.”

Among the speakers at the launch were former POW Gearóid Mac Domhnall and Sinn Féin Councillor Geraldine McAteer. Gearóid spoke from the perspective of a POW and a prolific producer of handicrafts while Geraldine explained the sense of pride and elation she felt when she received an item sent from one or other of the North’s prisons.

Also speaking at the launch was Angelina Fusco from the Heritage Lottery Fund, which is supporting the project financially. 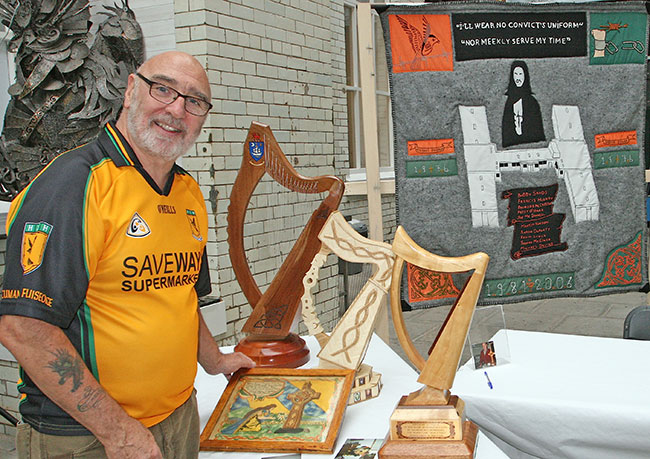 • Ex-POW Gearoid MacDomhnall with prison crafts, including a harp he made in Parkhurst on the Isle of Wight

Belfast Deputy Mayor Mary Ellen Campbell, herself a former POW, endorsed the project and brought along a number of pieces she had made while in jail.

“They mightn’t be the most artistic things ever made in the jails,” she joked, “but they are important to me and I am proud of them because I am proud to be a republican ex-POW and honoured to have been in prison with some brilliant people. These crafts remind me of that time.”

Geraldine McAteer recounted a number of stories relating to the items she brought to the launch, not least the green Aran jumper knitted by IRA Volunteer Mairéad Farrell while in Armagh Gaol.

Movingly, the Andersonstown woman recalled her friendship with Farrell and spoke of how the “geansaí” connected her to Mairéad’s experience and always reminded her of the republican ex-prisoner who was shot dead by the British SAS in Gibraltar in 1988.

She also told how the magnificent harp she had on display, crafted by south Armagh man Pat Thompson for her infant daughter, spanned three generations.

“My mother-in-law asked Pat to make the harp for my daughter when she was born. She wanted something special for her grand-daughter, and it is special and it has pride of place in our sitting room.” 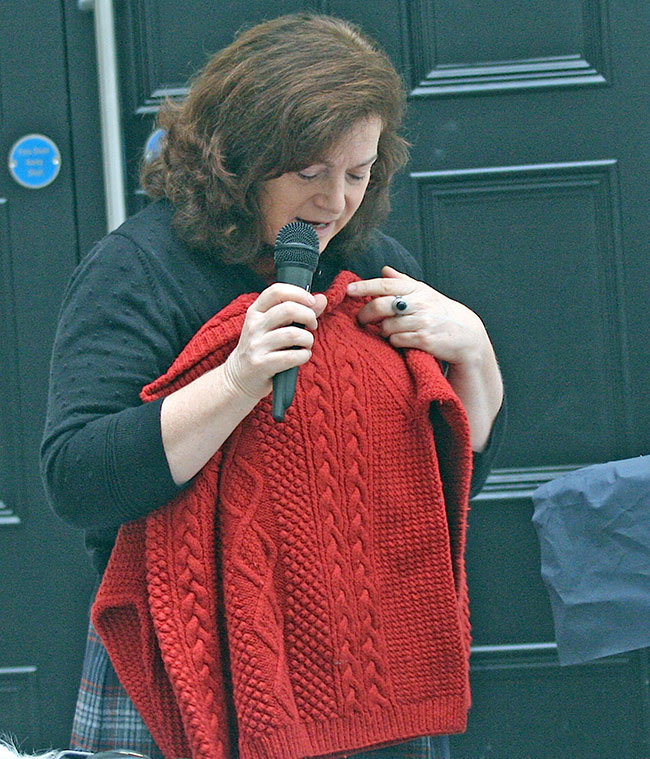 Former POW  Gearóid Mac Domhnall, who served over 20 years in British prisons – from Long Kesh to Parkhurst on the Isle of Wight to the top-security Whitemoor Prison in England – who captured the imagination of the crowd at the launch with stories of how prisoners used crafts to subvert the prison system.

The Belfast man explained how he would put labels on his pieces with his name in Irish and “CCP” written on the label.

“CCP stood for Cime Cogaidh Polaitiúil, but they didn't know that,” he smiled.

Mac Domhnall also brought along a sea chest he made from wood brought into Leicester Prison by some of the ‘Great Train Robbers’. “I always wanted a sea chest,” laughed Mac Domhnall, even though there was no treasure to be found in this particular box.

Dr Johanne Devlin Trew, a lecturer from the University of Ulster involved in the university's ‘Living Legacies 1914-18’ project, set the Coiste project in the wider context of what she calls the “memory boom” which has “over the past 20 years been generated by communities themselves which have begun to reclaim their own past as an important part of the present”.

The University of Ulster academic places the Coiste project – which uses “testimonial objects” to explore memory – in the same light as those from the Holocaust “but so many other examples exist of objects made by the inmates of concentration camps, slave plantations, ghettos and prisons”.

In his closing remarks, Pádraig Ó Dubhda summed up the project:

“Sharing such narratives is essentially a very positive thing. People have a deep pride in what they came through. They cherish their symbols of resilience and for many the craft piece is a proud reminder of a loved one who is no longer with us.

“Each piece is unique and each story is personal and the ‘Irish Republican Prison Crafts: Making Memory & Legacy’ project is an opportunity to record for posterity at least some of those stories that are part of our collective memory and legacy.”