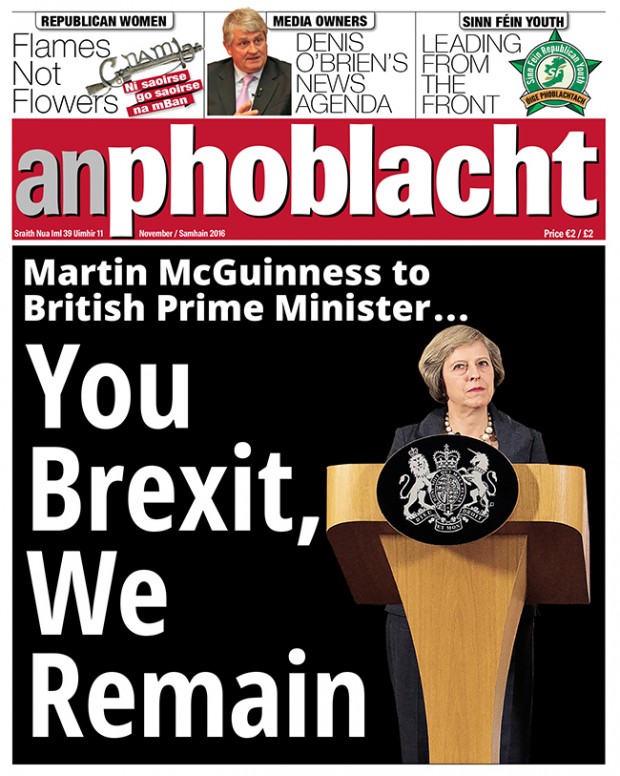 There will be no good Brexit. It will be bad for our people, bad for our economy, and bad for our services. It will further entrench partition and is fundamentally undemocratic.

BRITISH PRIME MINISTER Theresa May has been left under no illusion by Sinn Féin’s Martin McGuinness that Westminster cannot ignore the reality that the people of the North voted to remain in the EU and the enormous consequence of Brexit for Ireland.

Sinn Féin deputy First Minister Martin McGuinness and First Minister Arlene Foster were at 10 Downing Street on Monday 24 October for a two-hour Joint Ministerial Council meeting with the leaders of Wales and Scotland, Carwyn Jones and Nicola Sturgeon, with Theresa May.

In the run-up to the meeting, the British Tory Prime Minister called for a strengthening of the Union during the Brexit process.

The First Ministers of Wales and Scotland raised concerns that Westminster is railroading this process over the heads of the devolved Assemblies.

“What I am not prepared to do, as First Minister, is to stand back and see Scotland driven off a hard Brexit cliff edge because the consequences in lost jobs, lost investment and lower living standards is too serious.”

“The frustration which Nicola is talking about, which I share, is the lack of information about precisely what objectives the British Prime Minister has in relation to the outworking of this negotiation and what she is going to face when it comes to triggering Article 50.”

The deputy First Minister said that there is a “democratic imperative to recognise and respect the vote in the North to remain in the EU” in the Brexit negotiations process. He continued: “Any attempt to drag the North out of the EU represents a fundamental change in the constitutional position and an undermining of the spirit of the Good Friday Agreement.”

There will be no good Brexit. It will be bad for our people, bad for our economy, and bad for our services. It will further entrench partition and is fundamentally undemocratic.

Brexit is bad for all Ireland.

In the Assembly in the North, People Before Profit aligned with unionists and abstained on a vote for special status for the North. This caused the motion to fail.

There is an even greater imperative for united action across the political, community and commercial spectrum to make our voices heard – before the Tories at Westminster entrench partition and drag the North out of the EU.