During a debate on social housing provision, the Ulster Unionist Party/SDLP Opposition actually proposed building fewer houses than the Executive

THE impact of the “Brexit” referendum continued to dominate business at Stormont as First Minister and deputy First Minister Arlene Foster and Martin McGuinness met British Prime Minister Theresa May in Downing Street on Monday 24 October with the leaders of Scotland and Wales.

While the Assembly has not had the opportunity to debate the referendum result – in which the majority of the people of the north voted to remain – the issue has arisen during several debates during recent weeks.

One of the main debates on the issue was around a motion calling for the North to be given special status in recognition of the majority vote here.

What was notable during the debate was the position of People Before Profit MLAs Eamonn McCann and Gerry Carroll. Both MLAs abstained from the vote and, as a result, the motion was defeated by just one vote.

Not only did the pair vote against the democratic wishes of the majority of the population of the North, they also failed to offer any rationale for their position during the debate. It’s far from the “accountability” platform they campaigned on in May’s elections.

Essentially, the pair – from the Foyle and West Belfast constituencies, both areas which benefit from EU funding – aligned themselves with the most reactionary right-wing elements of the British Tory Party, including Boris Johnston and Liam Fox, who campaigned for Brexit in the first place.

The Assembly also had its second “Opposition Day” by the Ulster Unionist Party and the SDLP (not that anyone would have really noticed as it went well below the media and public radar). Following on in the same vein as the first one, it was an entirely lacklustre affair, not making any noticeable impact or headlines.

More than five months on from the Assembly elections, the so-called Opposition have yet to make their mark and show people what they have to offer except negativity. 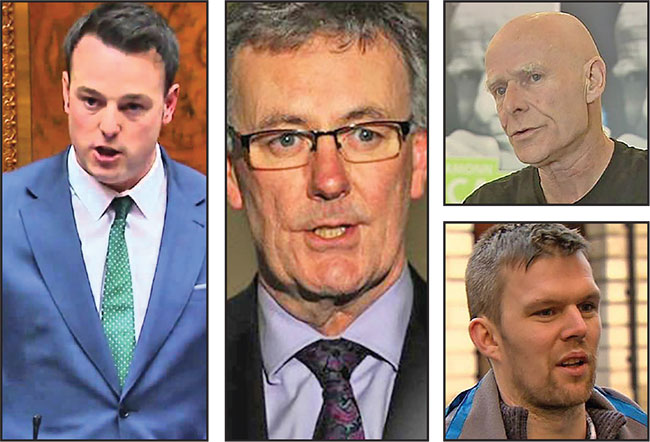 In the first “Opposition Day” the disjointed pairing of the SDLP and UUP brought forward three motions, two of which fell outside of the remit of the Assembly! This time around they brought forward a motion on hospital waiting times, which was totally flawed as it mixed up patients and referrals. Another swing and a miss.

UUP leader Mike Nesbitt and his deputy leader of the Opposition, the SDLP’s Colum Eastwood, have yet to produce anything concrete and they keep sticking to their mantra of “Rome wasn’t built in a day.” Meanwhile, Sinn Féin Infrastructure Minister Chris Hazzard opened the new £35million Magherafelt by-pass. Rhetoric versus delivery.

One of the most telling examples of the Opposition’s ill-thought-out approach came during a debate on social housing provision when the Opposition actually proposed building fewer houses than the Executive. With policies like that it’s not hard to see why both the SDLP and UUP had such a bad election.

Despite stunts such as Colum Eastwood speaking at the UUP conference (just as he did at the Fianna Fáil think-in recently – hedging his bets?) the Opposition is still floundering and is little more than a title. And they can't even agree on that as both Nesbitt and Eastwood claim to be leaders of the Opposition.

At times in Stormont, as in all debating chambers, elected representatives have been accused of speaking for too long, making sure they use up all of their allotted time, regardless of what they are saying.

That could certainly not be said of Sinn Féin’s ministers at the dispatch box in the Stormont chamber in recent weeks. Their short, snappy answers to oral questions have been direct and to the point.

On one particular occasion, after a long, rambling question from the UUP’s Robin Swan in an attempt to put Sinn Féin Health Minister Michelle O’Neill under pressure, calling on her to appear before the Health Committee to discuss hospital waiting times, the minister rose to her feet and gave a one-word response. “Brilliant,” she replied.

Elsewhere at Stormont, Sinn Féin maintained its pressure on the British Government over its failure to deal effectively with the legacy of the past.

Martin McGuinness and Junior Minister Megan Fearon met British Secretary of State James Brokenshire on the issue and made it clear that they are coming to the conclusion that the British Government is not – and never was – serious about finding a resolution to the outstanding issues.