The ‘centre ground’ and the politics of Tweedledee and Tweedledum 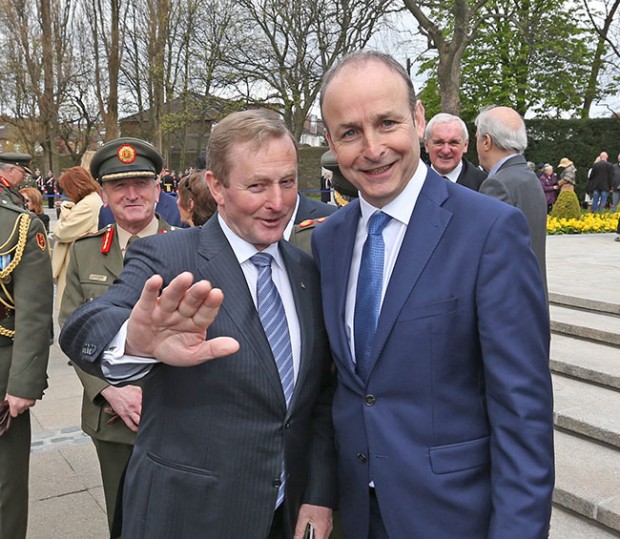 Sinn Féin’s politics are embedded in the Proclamation of 1916. It is these politics and policies that Fine Gael and Fianna Fáil fear

BUDGET 2017 marks another step in the slow, incremental realignment of politics in the South. The common interests of the Fine Gael and Fianna Fáil leaderships have crystallised more clearly than ever before – so much so that Fianna Fáil never even published an alternative budget of their own.

Instead they and Fine Gael have been very busy espousing the importance of so-called ‘centre ground’ politics.

In his Dáil speech on the Budget, Public Expenditure and Reform Minister Paschal Donohoe said:

“Those of us in the middle ground of politics have a duty to show that co-operation and consensus can work; to show that our tone can be moderate, but still convincing; and to show that things will not just fall apart and the centre can and will hold, stay firm and will grow.”

He was followed minutes later by the Fianna Fáil Finance spokesperson, Michael McGrath, who raised the spectre of the ‘extremes’. According to Teachta McGrath:

“The bigger picture is that the centre ground of politics is under attack, not just here in Ireland but throughout Europe, and I agree with the Minister for Public Expenditure and Reform, Deputy Paschal Donohoe, that there are various definitions of centre ground. When one looks at the alternative, one realises just how vital it is that the centre holds.”

Later in the Dáil debate, Thomas Byrne of Fianna Fáil returned to the notion of the centrist politics when he claimed that it is the people of Ireland who “are at the centre of our thinking, as are the policies that will make change happen for them”.

Fine Gael Health Minister Simon Harris took time out of his Budget remarks to “agree with one point made by Deputy Byrne, namely, the one on the centre holding. There are many people on the extreme of Irish politics who would not have thought that we could have delivered a Budget and who did not do anything to contribute to that process.”

What does all of this mean? At one level it is about using fear – trying to frighten sections of the electorate into supporting Fine Gael and Fianna Fáil. At another level, it is complete nonsense.

Mícheál Martin made a play for the centre ground of Southern politics in a speech he gave to the MacGill Summer School in the Glenties in July. He warned that it is the “extremes which are setting the terms of the debate” and he spoke of the challenge to “democratic societies”.

For Fine Gael and Fianna Fáil, their strategy to try and curb the growth of Sinn Féin is ‘Operation Fear’.

At the same time, the Fianna Fáil leader is verbally embracing Sinn Féin’s progressive policies. Fairness is the new buzzword for Fianna Fáil.

But Budget 2017 is not about fairness and equality.

Nor can its politics end the crises in health and housing; or deliver tax fairness; or end water charges. On the contrary, Budget 2017 represents the same old doublespeak and political manoeuvring of the past. There is no new politics, just new language for an old story.

The conservative parties remain firmly wedded to an ideology that prefers cuts to Capital Acquisition Tax for some of the wealthiest citizens in this state rather than investment in the health service. At a time when homelessness is at an historic level and people are being priced out of the rental and first-time buyers’ market, Budget 2017 will simply make matters worse. And the Budget allocation for a health service in crisis will not resolve the underlying problems.

And none of this takes into account the huge threat to the economy of this island and to society by Brexit.

In the Dáil, Sinn Féin is THE Opposition.

In policy terms, it is Sinn Féin’s articulation of radical republican politics and policies that is challenging the conservatism of Fine Gael and Fianna Fáil and Labour.

Sinn Féin’s politics are embedded in the Proclamation of 1916.

We are for economic equality and sustainable prosperity and a New Republic which will deliver the highest standard of services and protections for all our citizens. It is these politics and policies that Fine Gael and Fianna Fáil fear.