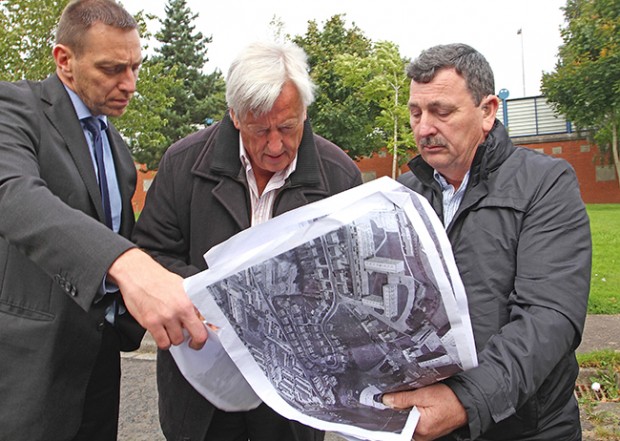 INTERNATIONALLY-RENOWNED English human rights barrister Michael Mansfield travelled to Ballymurphy in west Belfast on Friday 23 September and visited the sites where 11 civilians were shot dead by British paratroopers in 1971 during internment raids by the military.

Mansfield, who was appointed last year to represent the families in court, visited the area to familiarise himself and his legal team with the geography of area and see for themselves the places where killings took place.

They also wanted to locate the British Army's firing positions.

Belfast solicitor Pádraig Ó Muirigh, who represents the Ballymurphy families and relatives of the dead, accompanied the legal team as they made their way through the area.

This latest development in the Ballymurphy families’ struggle for justice came just days after a delegation walked out of a meeting with the British Secretary of State James Brokenshire at Stormont on Monday 19 September.

Representatives of all the North's main parties, except the DUP, accompanied the families' delegation to meet Brokenshire and support their call for the British Government to release funds for inquests.

Support for calls to release the additional funding also comes from no less a figure than the North's Lord Chief Justice, Sir Declan Morgan.

In his address on 5 September at the opening the new legal year, Sir Declan Morgan reiterated his call (first mooted in May of this year) for the British Government to fund a programme to fast-track inquests into some of the most controversial killings of the conflict.

Without the funding, Sir Declan says it will take “decades” before the backlog is cleared.

Speaking after the walkout at Stormont John Teggart accused the Secretary of State of “refusing to answer any of our questions”.

Teggart was also critical of DUP leader Arlene Foster, who vetoed Sir Declan's suggestion by refusing to allow it onto the Executive's order of business to be discussed, let alone agreed upon.

Meanwhile, it has emerged that the British Army has apologised over an incident in Iraq when British soldiers forced a teenage boy into a canal at Basra where he drowned.

The soldiers were tried in 2006 by a British court and acquitted of manslaughter over the death of the teenager, 15-year-old Ahmed Jabbar Kareem Ali.

It is also being reported that British Prime Minister Theresa May has told Britain’s five most senior defence chiefs to make “every effort” to halt what is being described by the right-wing media as the ‘hounding’ of British soldiers through charges and prosecutions in the courts for allegations of ill-treatment, torture and killings committed while on active service.