Disrupting the community and ‘being played by the Dark Side’ 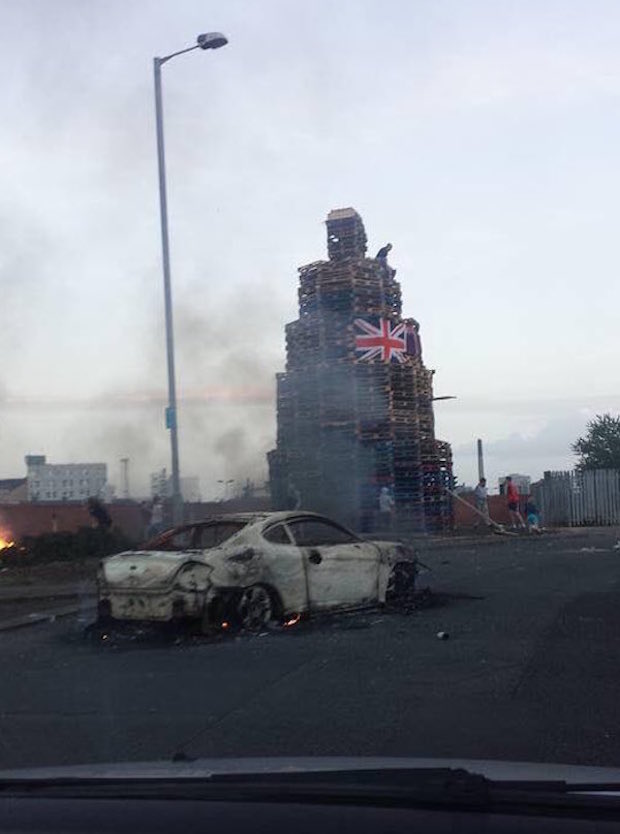 DOVE HOUSE Resource centre in the Bogside area of Derry City and Féile an Phobail (West Belfast Festival) are renowned examples of community empowerment and inclusion in the North of Ireland.

They were established to make a difference in ordinary people’s lives and have continued to do that since their foundation. Both these and other community-led projects in rural and urban nationalist areas of the Six Counties were products of their time – of an increasingly politicised community, and the influence of ex-POWs released from jail in the 1980s after the Hunger Strikes and prison protests.

Dove House and Féile an Phobail were formed during the mid to late 1980s when the political conflict in the North was raging. This period witnessed a significant shift in British state politico-military-security strategy and policy towards the North.

The Hillsborough Agreement (Anglo-Irish Agreement) in 1985 began a two-pronged political and military offensive against Sinn Féin and the IRA in reaction to the surge in support for the republican struggle in the post-Hunger Strike era.

The template for this step-change was formulated during the 1970s by the British Army’s General Frank Kitson (pictured below). He pioneered the combined use of political, legal and military strategies in the North and the infiltration of state agents into nationalist areas in order to promote conflict and division within the IRA’s support base.

One infamous aspect of Kitson’s counter-insurgency approach was the formation of the Military Reaction Force, comprising state agents, to carry out assassinations against nationalist civilians and republican activists.

Under the direction of Prime Minister Margaret Thatcher, many of Kitson’s tactics were redeployed and adapted for use in the North during the 1980s and 1990s.  The Force Research Unit, a secret undercover British Army section led by Brigadier Gordon Kerr, was central to that phase.

Britain’s military and security agencies became centrally co-ordinated by a Tasking and Co-ordinating Group (TCG) which was directly accountable to the British Cabinet at Westminster.  The TCG was responsible for organising wholesale repression, shoot-to-kill operations, the prolific recruitment of state agents, and the organisation, arming and direction of unionist death squads.

A broadcasting ban was imposed on Sinn Féin. Attempts were made to marginalise all forms of political opposition.

The state tried to criminalise the republican constituency by publicly labelling it as a “terrorist community”.

Projects such as Dove House and Conway Street Community Enterprises were subjected to raids and surveillance, and denied funding under a policy of ‘political vetting’.

The British state attempted to put projects and initiatives such as Dove House, Springhill Community House and Féile an Phobail out of business because they promoted independent thinking and challenged the status quo.

During the political conflict, such projects built and sustained social and community cohesion in nationalist areas.

Since then they have played a central role in supporting the transition from war to peace by continuing to emphasise community empowerment, social inclusion and self-help.

Conversely, some republicans, unionists, and elements in the British state have always opposed the Peace Process and the changes it has brought about.

A small number of republican militarists support the continued use of armed actions; others are politically opposed to Sinn Féin and republican strategy.

There are many reasons for this opposition and the nature and tempo of it has changed over the years.

Divisions between other republicans and the Sinn Féin support base exist for many reasons, including genuine political disagreement but also because of personal grudges, animosities and old enmities.

There are multiple motivations for the actions and behaviour of republicans who oppose the Peace Process and Sinn Féin, and those masquerading as republicans.

Organisations have emerged in recent years supposedly to promote an alternative republican strategy and agenda. But they have never attempted to build a political or electoral base.

Instead, many of their energies have been exclusively directed towards attacking the Peace Process and the Sinn Féin party, and promoting the use of vile, personalised abuse on social media platforms.

Some have become increasingly engaged in violent attacks – including murders – against those living in nationalist areas. They are now in direct conflict with the nationalist population.

It is clear that these groups have been infiltrated, both North and South, by criminals (including individuals dismissed with ignominy by the IRA in the past).  They masquerade as republicans to pursue wanton criminality which extends to widespread ‘taxation’ of drug dealers; extortion of businesses and building sites; “tiger kidnappings”; robbery; smuggling;  and theft of vehicles, farm machinery, and livestock.

An atmosphere of recrimination and adversity has been created in nationalist areas in an attempt to provoke confrontation with Sinn Féin activists and local republican supporters.

Last month, a sinister escalation in this pattern of activity occurred when both Dove House Resource Centre and Féile an Phobail became targets.

Two attempts were made to burn down Dove House by local criminals claiming to be republican activists, whilst the Féile premises was attacked and its workers were publicly threatened. 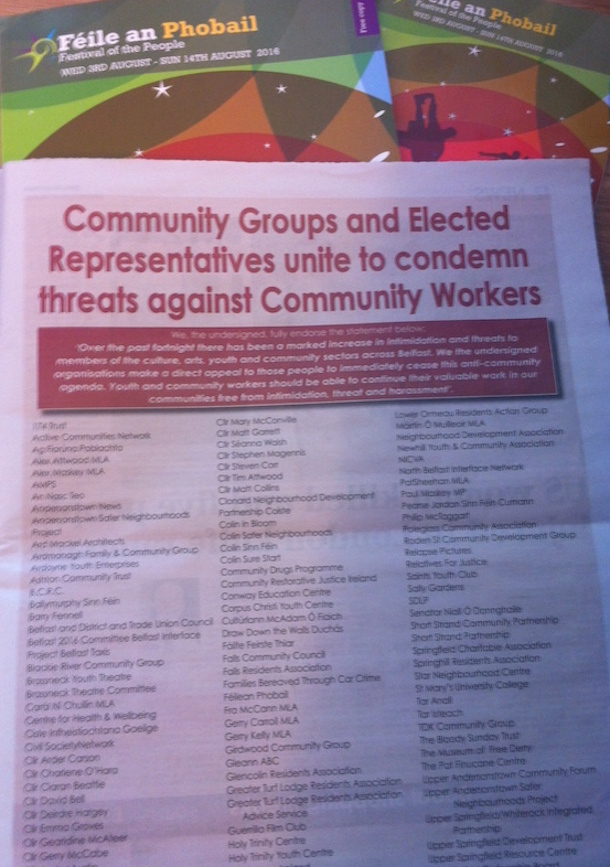 Controversies around community murals and the anti-community bonfires were stirred up to try and provoke physical confrontation with Sinn Féin activists and supporters.

The only effect of such incidents is to disrupt, divide and demoralise the community within nationalist areas.

The only conclusion to be drawn is that this is their intended objective.

Why are projects with huge community integrity – which have previously been the target of British political repression – now being attacked and threatened by individuals who claim to be republicans and by criminals masquerading as republicans?

None of that has anything to do with Irish republicanism.

Instead, republicans hostile to Sinn Féin, and criminals masquerading as republicans, are being ‘played’ in an attempt to destabilise nationalist areas in the North.

There is currently a concerted effort to undermine progressive republican politics, to frustrate democratic reform, and to subvert the Peace Process.

What is happening is not a battle for hearts and minds within the republican and nationalist constituency: it is the present-day outworking of a counter-insurgency agenda pioneered by General Kitson, updated by Brigadier Kerr, and now re-engineered by those within the British Ministry of Defence and Security Services in order to control the political agenda in the North and avoid having to deal with the past.

Eighteen years after the Good Friday Agreement, British security and intelligence services continue to exert a toxic influence in the North of Ireland.

The activities of the ‘Dark Side’ are totally incompatible with the democratic process.  It is time for wider society to demand an end to their corrosive role and existence.

Consensus among different strands of republicanism may be unattainable but the only way to address political divisions is through engagement and dialogue. Old enmities, personal grudges and mistrust of each other should not be used as an excuse to stop that happening.

There is no longer a context which justifies any form of armed activity. Democratic politics must have primacy.

Those who oppose Sinn Féin should organise politically as a democratic imperative. Political strategy and popular support is the only way to achieve republican objectives.

For several years the Sinn Féin leadership has attempted (unsuccessfully) to privately meet with other republicans who oppose our party and the Peace Process. As National Chairperson of Sinn Féin, I have written officially (twice in the last eight months alone) to a range of these groups, inviting private dialogue.

We will continue to seek engagement. However, civic society also has a major responsibility to encourage and enable such dialogue.

Engagement does not mean surrendering the integrity of a political position. Republicans can agree to disagree on the basis of mutual respect.

This much is clear: refusal to engage in dialogue perpetuates hostility, enmity, mistrust and division, and fuels the potential for confrontation.

That is a situation which is wide open to ‘being played by the Dark Side’.