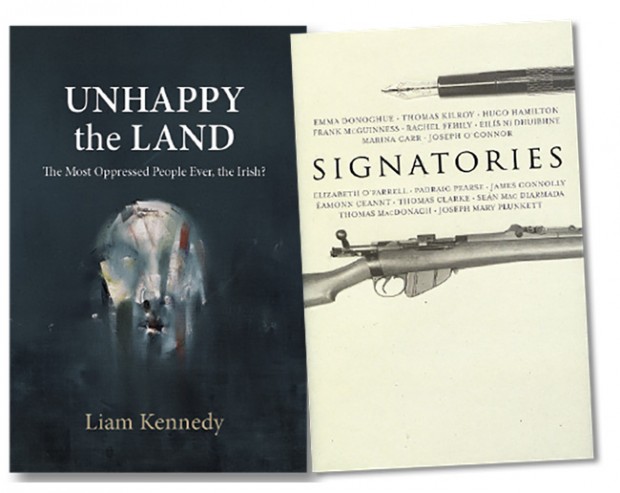 THIS IS AN UNUSUAL little volume consisting of eight ten-minute monologues – one for each of the executed signatories of the 1916 Proclamation, and Nurse Elizabeth O’Farrell (presumably included to address gender imbalance).

Each monologue is written by a different author selected from the great and the good of Ireland's literati. The monologues are scripts, complete with stage directions, of  works originally created to be performed in Kilmainham Gaol by candlelight. Not at all precious then.

The monologues themselves vary wildly. Some are truly excellent, giving vivid interpretations of the individual subjects and succeeding in imbuing the iconic figures with a real living humanity. Others are not so successful. And the section on James Connolly is just weird.

Whilst undoubtedly a fine piece of prose, the monologue concerns an adult’s recollection of an attempted child abduction in Birmingham some time after 1970. The children’s babysitter foils the attempted abduction and sings John Lennon’s Working Class Hero “for James Connolly”. And that’s it. Sorry, call me a philistine but WTF? This is not to criticise it as a piece of writing (it is finely crafted, taut and highly evocative); it’s just that I can’t for the life of me see why it has been included in an anthology on the signatories of the Proclamation. I’m sure that there is some profound point being made but the connection is too subtle for my limited faculties.

The authors included in the collection read like a Who’s Who of contemporary Irish novelists and playwrights: Joseph O’Connor, Emma Donoghue, Thomas Kilroy, Hugo Hamilton, Frank McGuinness, Rachel Fehily, Éilís Ni Dhuibhne, and Marina Carr. The work was commissioned by University College Dublin and all of the collaborating authors are past graduates of that institution. It should probably be remembered that Thomas MacDonagh was a lecturer in English at UCD.

In summation, an unusual work, challenging in places, but overall a highly-rewarding read.

Unhappy the Land – The Most Oppressed People Ever, the Irish?

PROFESSOR LIAM KENNEDY is a lecturer in Economic History in Queens  and Ulster Universities. Tipperary-born but Six Counties based (“our own Wee Country”, as he calls it ), he is one of the leading voices in articulating the revisionist view of Irish history. The fact that this book has been repeatedly and shamelessly plugged by Ruth Dudley Edwards in her Irish Times column really says all you need to know about the orientation of this particular volume.

The book is a collection of essays designed to substantiate the hypothesis that Ireland (and nationalist Ireland in particular) has assumed the mantle of victimhood and that things weren’t so bad really. This is achieved in several ways, one being classic “whataboutery” – things may have been bad here but what about Russia, American blacks, the 100 Years War, etc, etc.

Professor Kennedy also has an unfortunate tendency to conflate Catholicism and national sentiment, citing “cultural envy” as one of the motivating forces behind the adoption of victimhood. This is, unfortunately, just one example of the selective cherry-picking used to establish his hypothesis. No mention is made of the Protestant ethos of the United Irishmen, or of (Anglican) Wolfe Tone’s declaration: “To unite Protestant, Catholic and Dissenter under the common name of Irishmen in order break the connection with England, the never failing source of all our political evils, that was my aim.”

Perhaps the most egregious omission is from the section dealing with the Famine, which argues that in the absence of motive it is wrong to use the term “genocide”.

It is always refreshing to encounter contrary opinions but this book does nothing to establish any legitimacy for its viewpoint.